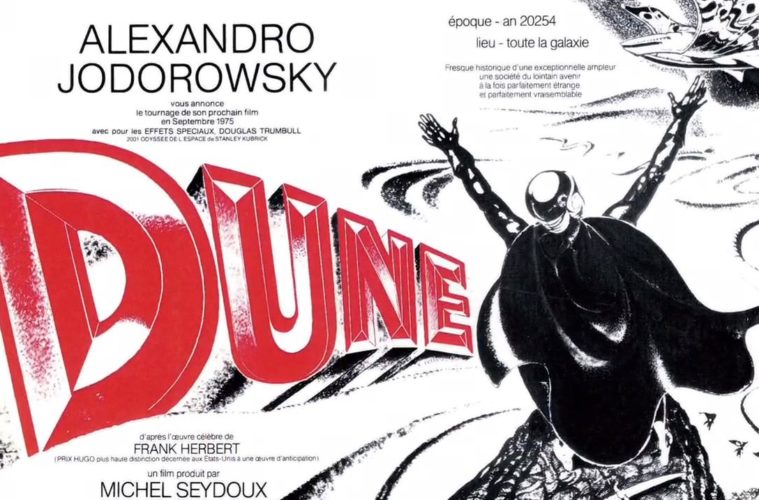 Never before has there been a documentary about lost cinema quite like Jodorowsky‘s Dune. Riding off the success incurred by career-defining films in the early 1970s (El Topo and The Holy Mountain), Alejandro Jodorowsky was primed and charged to make his most ambitious film to date, a grand scale adaptation of Frank Herbert’s influential sci-fi masterpiece, Dune. It never happened.

So, in chronicling a failed effort, this documentary visits Jodorowsky in his home office, adorned with books, posters, and relics from the movies he made. It’s in this intimate setting where he casually discusses ambitions for a film that could have changed the industry as we know it today — and, yet, also influenced a generation of science fiction cinema without ever actually coming to the light of a projector.

Once Jodorowsky settled on the idea to adapt Dune, he went out to assemble a team of spiritual warriors to tackle this religious journey in making a film that, from his perspective, could change the consciousness of generations to come. For the Chilean surrealist filmmaker, cinema is more important as an art-form than an industry. While to some this grandeur of self-importance might sound “pretentious,” its important for Jodorowsky to believe in his vision as something greater than your standard film, and his charisma carries such a belief to everyone he approaches about the project. What’s more amazing is the incredible team he was able to assemble prior to ever entering production.

From having Pink Floyd agree to the soundtrack, Salvador Dalí in line to play the galactic emperor, and Orson Wells signed on as the villain, Dune’s ensemble of talent was uncanny. Using artists such as famed bande-dessine artist Mobius, book cover illustrator Jeff Ross, and famed surrealist painter H.R. Giger to create original artwork, Jodorowsky created a look book of unprecedented magnitude, virtually crating the entire film as comic book storyboard hybrid. Using this tome to show studios, there was the hope that, with all these combined elements, the film production could easily raise an enormous sum of $15 million to make this dream into a reality. However, due to Jodorowsky’s ambition — not to mention, his unwillingness to budge and change — he was shunned by the studio system and the project went cold. Instead of being bitter about failures to make this film a reality, Jodorowsky has a surprisingly positive attitude about the entire experience. The reason: despite the project never coming to fruition, it spawned creative influence in many science fiction films that came thereafter, despite some blatant rip offs from the artwork in Flash Gordon. In many respects, this documentary plays as a perfect companion piece to his new film, La Danza de la Realidad, in its account providing context for the length of time it took this director to get back in the chair. But the real inspiration behind Jodorowsky’s Dune is the passion this director has for the love of filmmaking, making it a must-see for aspiring filmmakers and film lovers alike.