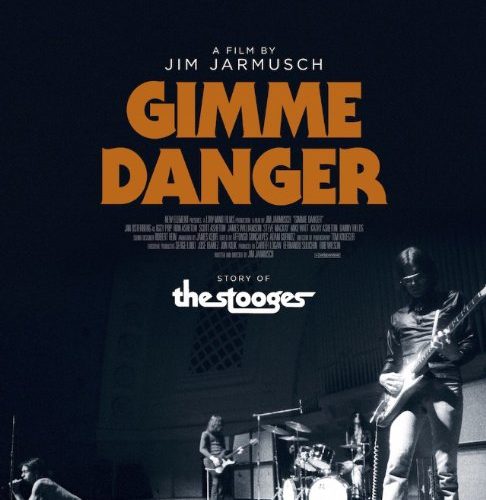 If there is one blemish in Jim Jarmusch’s exceptional filmography, it’s his first foray into documentary: 1997’s little-seen Year of the Horse, a surprisingly insipid portrait of Neil Young and Crazy Horse on tour. He gives it a second try with Gimme Danger, another homage to a legendary rock band, The Stooges, which, though more enjoyable and informative, nevertheless confirms that the director should stick to fiction.

Those hoping for something in the line of the Maysles brothers’ and Charlotte Zwerin’s Gimme Shelter will be sorely disappointed, as similarities don’t extend much beyond their titles. Unlike that canonical masterpiece, Jarmusch’s film is a strictly conventional affair that resembles any number of TV documentaries.

Addressing the camera, Iggy Pop (née James Osterberg) narrates the history of The Stooges, starting with a childhood living in a cramped trailer with his parents in Ann Arbor, Michigan. He describes his first experiences playing drums in different bands as a teenager, his early influences – from Clarabell the Clown to the black music scene in 1960s Chicago – and the eventual formation of The Stooges with him as frontman because, as he explains, he’d grown sick of sitting at his drum kit staring at other people’s butts.

From this point onwards, the rest of the surviving band members and other relevant talking heads also chime, complementing Iggy’s account. Gimme Danger then chronicles the history of the band from its inception through the ups and downs that accompanied the release of their three albums, their dissolution in 1974, eventual reunion three decades later, and culminates with their induction into the Rock ‘n’ Roll Hall of Fame in 2010. It’s an odd choice to present this as the apotheosis of The Stooges’ achievement, considering the tackiness of that honor – Jarmusch avoids mentioning that their fellow inductees that year included ABBA – especially right after outlining their direct influence on decades of incredible bands, from The Ramones to Sonic Youth and Nirvana.

The different interviews are, of course, accompanied by a montage of relevant photographs and clips of concert performances – primarily the former, unfortunately – as well as the occasional illustrative graphic or block of text to fill any gaps in information. There are very few original touches in this regard, with the most memorable being segments of cut-out animation that look like early South Park with Jan van Eyck-like illustrations of the band members.

A huge part of The Stooges’ appeal derives from the raw intensity of their music – it’s not coincidental that their most iconic album is called Raw Power – and of Iggy’s charismatically convulsive stage performances, and both of these are insufficiently conveyed in Gimme Danger. While it’s possible that not enough footage exists of their concerts, considering it was the ’70s and commercial success largely elided them during their original existence, their songs should have been given more prominence. Instead, their use is largely limited to short extracts and background accompaniment in favor of a needlessly exhaustive – and, at nearly two hours, exhausting – factual history of the band.

Unlike an encyclopedia, cinema can provide an experience that is visceral and transporting. It’s disappointing that a filmmaker of such formidable talent as Jarmusch should fail to capitalize on this advantage.

Gimme Danger premiered at the Cannes Film Festival and opens on October 28. See our festival coverage below.