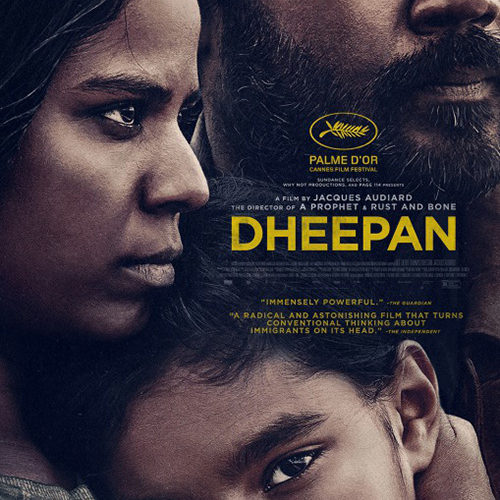 Until losing its cool in the third act and ending on a relatively soft note, French veteran Jacques Audiard‘s Dheepan is a muscularly directed dramatic thriller about the difficulties of starting over and the inevitability of violence. Clear-eyed, tightly wound, and cinematically and psychologically immersive, it’s a furious ride of a movie that actually has something to say.

We first meet the three protagonists under fatally dire circumstances as a civil war-ravaged Sri Lanka burns with hellish intensity. A former soldier, a young woman, and an orphaned child, joined by chance and the common need to flee the country, assume the identities of a deceased family. Renamed Dheepan (Jesuthasan Antonythasan), the man who has seen too much death in his life becomes a janitor and caretaker at a housing project outside Paris. His pretend wife, Yalini (Kalieaswari Srinivasan), also starts working for a demented old man living in the compound. Their supposed daughter, Illayaal (Claudine Vinasithamby), is sent to French school and made to readjust, most notably by being told not to eat with her hands. In order to escape an atrocious past, they’re ready to fake, forget, and get lost in a new, unfathomable culture. Little do they know that, under the pacified surface of first-world civilization, things are not nearly as peaceful as they look.

The eventful, richly observant script touches on themes of humanitarian asylum, cultural acclimation, and the true makings of a family. Crossing continents and milieus, it sheds light on the misfortunes of those we don’t necessarily notice in our blissful oblivion. And while certain plot points that emerge later on carry with them a whiff of Hollywood-esque artificiality, this story mostly unfolds with a natural dynamic. Its message, whether political or sociological, is delivered through a strictly personal perspective based on the evolution of the characters, sounding earnest instead of preachy.

Even stronger is Audiard’s mise-en-scène, which has such a firm grip on the timing, visual composition, and tonal changes of these proceedings that, despite any thematic unfamiliarity, you fall right into its groove. Whether in moments of urgency or during the occasional breaks of levity, a sense of immediacy and presentness stands out. Also remarkable are the handful of fight-and-flight setpieces towards the picture’s end. While Audiard proved his knack for hard-hitting action in A Prophet, the level of flesh-on-metal impact, made palpable here in a swiftly executed crash sequence — or the force field of breathless tension created within an apartment block at war — still stuns.

Antonythasan, once a Sri Lankan boy soldier himself, is superb in the lead role. Face etched with experience and posture weighed down by deep sorrow, Dheepan’s every move feels significant, sometimes heartbreakingly so, as it reminds you of someone who’s lived through such unspeakable horrors and forgets how to just be. All the more delightful, then, are his expressions of innocent curiosity and genuine relief, which would come out of nowhere and just light up the screen. Srinivasan, making her acting debut here, brings much tenderness and vulnerability to the equation, although her performance in a couple of emotional scenes could probably use some fine-tuning.

Considering the impeccable fluidity and narrative clarity of what came before, the last half-hour of Dheepan does appear distractingly messy. Flashbacks or insertions of purely fantastical frenzies get a little out-of-hand, while outbreaks of rage and frustration err on the excessive side. The actual ending, mere seconds of shockingly happy footage, also comes across as slightly awkward when concluding so much tragedy. One may argue that it’s nothing more than a wishful projection of unrealized dreams, but the sugary aftertaste it leaves only serves to reinforce a vague impression of mainstreamed sentiments that don’t reflect well. Informative, compassionate, technically polished, there’s no doubt Dheepan is a work of extraordinary craft and great heart. Still, one kind of longs for the day when Audiard would ride his gritty side all the way to the finish line, sending us off with a bang instead of a settlement.

Dheepan won the Palme d’Or at Cannes and will be released in the United States by Sundance Selects on May 6th. See our festival coverage below.