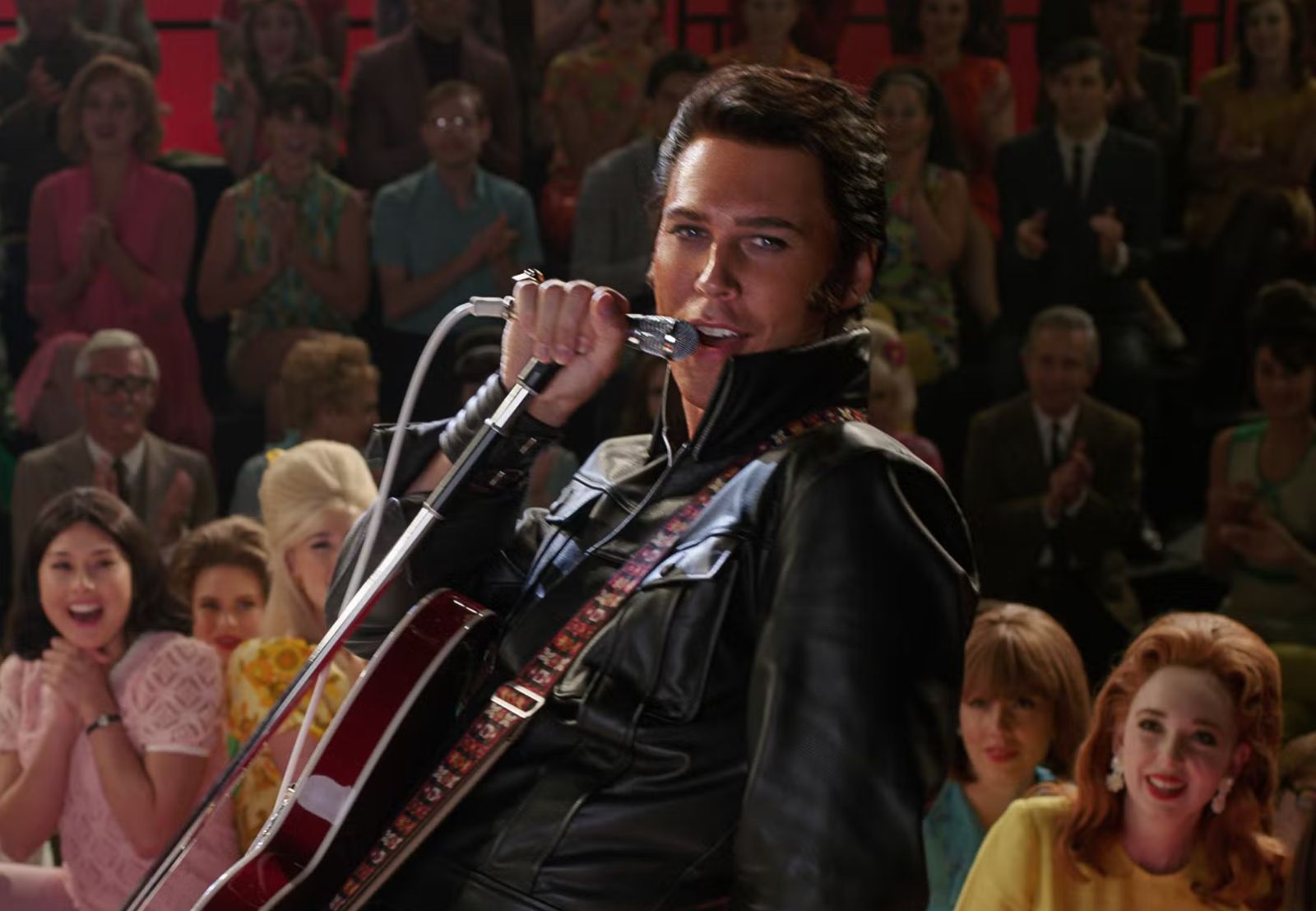 Few filmmakers embrace artistic dichotomy like Baz Luhrmann. The Australian writer-director known for epic, ornate, long-gestating projects has become synonymous with both extravagant innovation and chaotic fluff. He is a walking, talking, directing state of creative contrast. “Six films into his career” might make it seem like he’s a relative newcomer, but Luhrmann’s been helming giant features since his 1996 tropical Ed Hardy rendition of Romeo + Juliet, which pales in scintillation to Elvis.

The King’s first big-screen biopic (no disrespect to John Carpenter and Kurt Russell’s 1979 TV movie) begins with a decadent gold, silver, crystal, and ruby rhinestone Warner Bros. logo bursting into frame. It garnered enough compulsory hoots and hollers in my screening to invade any Elvis skeptic with fear of future fondness. In one sense the logo is a tiny thing to note; in another it’s a perfect encapsulation of Luhrmann’s approach: extra. No, Robert Zemeckis is extra. Luhrmann is five layers of hell deeper.

But listen: hell is a darkly peculiar place. You likely didn’t choose to be there. It’s probably not the best time. You’re not entirely sure what’s going on because it doesn’t play by the rules. But you’ve never been there before and you’re stuck for eternity (159 minutes), so you might as well look around and take in the twisted fantasy, even as what you find leads to weeping and gnashing of teeth.

Elvis is kind of like if you gave a thousand people disparate creative projects with a vaguely similar subject and thematic throughline—let’s say Elvis and excess—and instead of trying to direct them into a legible whole throughout, you haphazardly stitched them together at the end unedited with the goal of achieving only three things: a breakneck pace capable of inducing nausea, spectacular design, and an infinite, impenetrable sense of stardom. Whether you love it or hate it (both factions will be loud), there’s no denying the originality.

Luhrmann is one of the rare Hollywood directors allowed near-total creative freedom in the 21st century on a blockbuster scale, and he’s harnessed that power to greater and greater return. (Elvis is rumored to come in at around $85 million.) And even among the top dogs, no one is entrusted with fever-dream adaptations of international pop-culture treasures quite like Luhrmann: Romeo + Juliet, Moulin Rouge!, The Great Gatsby, the country of Australia. It’s usually the opposite: the wilder the adaptation seems, the more risky the production becomes, and the less creative autonomy studios are willing to grant. But studios aren’t just investing in Luhrmann.

Costume designer, production designer, and producer Catherine Martin deserves just as much credit for the past 26 years of her husband’s films—defined by her inventive baroque stylings—and Elvis is her most phenomenal work yet. The only person to collect Production Design and Costume Design Oscars for the same movie in the same year, Martin is absolutely essential. In earnest, Luhrmann’s screenwriting is the main problem, and that’s exacerbated here.

Elvis is anything but narratively complex, much less compelling. For as dazzling as it is in design, it couldn’t be more unimpressive in dialogue and story. It opens disjointedly with ever-morphing visuals of snowglobes, Vegas, and longtime corrupt Elvis manager Colonel Tom Parker aka The Colonel (Tom Hanks) dying in order to set himself up as the goofy narrative framing device. Then, thematically confused—and Hanks’ awful accent leading the way—we long-distance sprint through Elvis’s life while Luhrmann highlights the most obvious moments, gives almost no new color to the King of Rock ‘n’ Roll, and leaves us all a bit dumber about music history.

It comes across as a joke—the movie called Elvis about Elvis follows… Elvis’s manager? It seems especially silly when you have Austin Butler playing Elvis. Butler—who got the role after Denzel Washington cold-called Luhrmann and insisted Butler (who’d he’d just worked with on a play) was the best guy for the part—is an absolute knockout, an Elvis to end all Elvis’s, and the biggest reason, tied with Martin’s design, to watch. Otherwise there’s a black hole of fluff where profound storytelling could be, a giant, blinking marquee arrow pointing to Butler and Martin’s work.

There’s a nauseating emphasis on Elvis’s desire to be like a superhero that one can’t help seeing as a desperate grab for an audience that might not think it cares for Luhrmann in DC and Marvel heads—although the irony is in the detail: Luhrmann is more like Marvel than most in formula, poor screenwriting, and underdeveloped concepts.

Last but certainly not least: the music. There’s plenty of Elvis and non-Elvis, though not much, if any, traditional Elvis. The closest thing to that is a relatively true (and brief) Kacey Musgraves cover of “Can’t Help Falling in Love” that plays for no more than a minute. Otherwise Elliott Wheeler’s music is gaudy and contemporary—incorporating rap, hip-hop, house beats, and pop sounds, as in The Great Gatsby. But it’s so damn inventive and widespread across Elvis’s catalog that you can’t help admiring it.

A man plays the blues on an acoustic guitar and we hear a kick drum, a clubby bass line, and a guitar sound that is definitely not coming from that 1940s guitar. Wheeler manages to weave pop hits, like NSYNC’s “Bye Bye Bye” and Brittany’s “Toxic,” into Elvis songs so subtly you have to aurally double-take (and still look it up after). But it never ruins it. And these are Elvis songs. That fact alone does most of the legwork. We don’t usually hear what it looks like is being played onscreen.

If Elvis ultimately isn’t about the music or the story, the former outshines the latter. Luhrmann films (or should we call them Luhrmann-Martin films?) are about aesthetics. Elvis is a jerky, crick-in-the-nick rollercoaster ride that apparently wants us to know how bad it felt to be on one of his legendary benders. But stylistically it’s impeccable––the cinematic Elvisification of everything, from 1950s Memphis to trippy cinematography to B.B. King to Kodi Smit-McPhee’s character from The Power of the Dog.

It’s tough to watch a movie like Elvis and totally dismiss it, no matter how much of a trainwreck it might seem. Name a department that isn’t the Tom Hanks department and there’s plenty of creative work worth praising. It’s just utterly incoherent with the material—that’s even tougher to get past.

Elvis premiered at the Cannes Film Festival and opens on June 24.