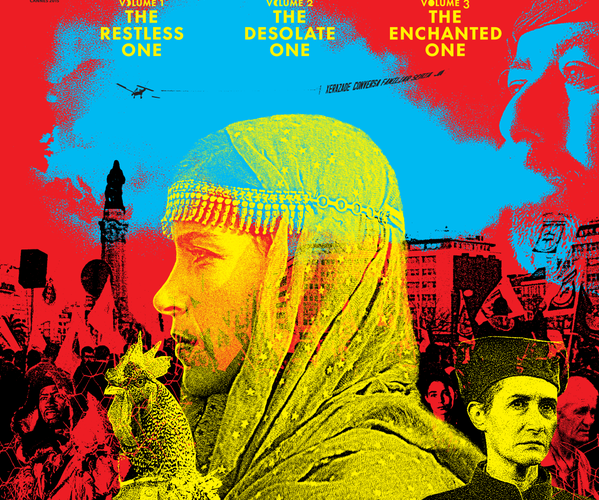 Miguel Gomes’ Our Beloved Month of August and its ecstatically received follow-up, Tabu, showcased the director’s love of storytelling as a means of contemplating reality. In these films, by whimsically intermingling and reinventing cinematic traditions — as well as throwing in an abundance of personal innovations — Gomes wove tales that reflected on defining aspects of Portuguese culture with irresistible idiosyncrasy. The six-hour triptych Arabian Nights continues in the same vein, though with far greater ambition. Fascinating even in its misfires, this sprawling and fantastical document of the country’s plight in the wake of the global financial crisis confirms Gomes as one of the most exhilaratingly inventive filmmakers working today.

As signaled through intertitles in each of the film’s three parts – The Desolate One, The Restless One and The Enchanted One – Gomes’ film is not an adaptation of the original Arabian Nights. Apart from a few direct references, such as the inclusion of Scheherazade as a character and principal narrator, the classic collection of stories primarily served as a model for this film’s narrative structure. There are eleven main stories told by Scheherazade, some split into chapters and almost all featuring sub-stories integrated as flashbacks, diegetic narrations, and other such digressions, bringing the total number of tales – some lasting as little as a minute or two – up to a few dozen.

To gather material for the script, Gomes and his team scanned the news for interesting stories over the course of one year, from August 2013 until July 2014, filming as they went along. The episodes that compose Arabian Nights are mainly creative recreations of actual events that happened across Portugal in that timeframe, most of them filmed in their original locations and sometimes also featuring the real people involved. (The film’s website hosts a large selection of articles collected for the production, offering great post-hoc reading material.)

Following a meta-fictional prelude reminiscent of Our Beloved Month of August, in which Gomes shares his self-doubts about attempting such a large-scale project, the film jumps into its first story. Its title immediately sets the tone: The Men with Hard-Ons. The savagely satirical segment depicts how the Portuguese prime minister and the representatives of the ‘Troika’ (IMF, European Commission and European Central Bank) settled on the policies to redress the economy, selling their country down the river. The politicians, portrayed as uproarious buffoons, are approached by a sorcerer who volunteers to magically endow them with enormous, everlasting erections, which they all eagerly accept. Mighty pleased with their newfound virility, they flaunt their trouser-bulges and engage in marathon masturbating sessions until, at long last, they discover that sporting perennial erections isn’t all that convenient. The sorcerer reappears and offers to free them from their predicament, though this time in exchange for a payment of a few billion euros. Where to find such a sum? Why, from the Portuguese economy, of course! And so, because of a group of imbeciles with hard-ons, the people of Portugal had to tighten their belts.

The subsequent stories, though equally absurd, are less overtly political. Traveling all over the country, the film takes us to witness the lives of those affected by the government’s stringent austerity measures. We visit a small rural village where a rooster is first put on trial and then runs as a candidate in the municipal elections. Along a spectacular range of seaside cliffs, we meet a gorgeous but dim-witted man called Paddleman (on account of his mode of transportation: a paddleboard), father of 200 children, and the breakdancing thief Elvis, who “steals out of necessity but dances out of pleasure.” A Maltese poodle named Dixie takes us into various apartments of a popular housing tower as he goes through a succession of owners, introducing us to closet rappers, nudist Brazilian sunbathers and revellers who urinate in elevator shafts. We follow the redoubtable criminal Simão Without Bowels as he runs from the law across verdant countryside, teleporting when he needs to and seducing three naked beauties who first sit on him and then prepare him a grilled dinner. At the bottom of the sea, we discover an underfunded hospital inside the stomach of a whale – possibly the same whale that is later found washed up on the beach and blown to pieces with explosives, possibly another.

Stylistically, Arabian Nights is as playful and imaginative as the stories it comprises. Documentary footage is freely integrated into the fictionalizations; the screen is split and flipped; actors reappear in various segments in different roles; characters speak Portuguese, French, English, German and Chinese; ancient Baghdad is rendered on Mediterranean islands with a backdrop of modern cityscapes – the list just keeps going. Befitting a film based on fairy tales, the experimentation at the level of storytelling is particularly exhaustive. In addition to its highly intricate structure, which it navigates effortlessly, Arabian Nights finds myriad possible applications for voice-overs and inter- and subtitles as it cycles through countless narrators, both intra- and extra-diegetic, human and animal. In terms of images, the film is a constant visual delight. Shooting on 35mm and 16mm with Apichatpong Weerasethakul’s usual DP, Sayombhu Mukdeeprom, Gomes compiled a vast and ravishing travelogue, inviting the viewer on a journey to discover the beauty and variety of his homeland. Gomes’ love for his country is equaled by his love for its people, which is keenly felt in every one of the stories (minus the hard-ons, of course). Despite their fanciful absurdity, the tales are always marked by a palpable empathy that disallows them from slipping into mere farce. To make sure this crucial dimension isn’t lost, some are even quite tragic. The Swim of the Magnificent is perhaps the film’s most poignant segment. The Magnificent of the title are unemployed members of a trade union who tell us their experiences under austerity in a series of interviews that were certainly unscripted. We thus learn how a 50-year-old man had to move back in with his parents after applying to hundreds of jobs without success, or how another man was denied unemployment benefits because his wife earns a miserly 400 euros a month, which forced the couple to eat at soup kitchens (the provision of aid from charities rather than the government is a recurring theme in the film). Every first day of the year, the trade union organizes a communal swim for all its members. The scene of the swim, also likely to be documentary footage, closes the first of the film’s three parts. Its depiction of everyone running into the sea and celebrating the coming year with hope for what lies ahead is beautiful and devastating in its overwhelming humanity.

Of course, in a film as sweeping in its ambition and as eager in its risk-taking, there will be inevitable failures. Not every story is equally captivating and Arabian Nights does get tiresome in stretches that feel aimless, repetitious or unjustifiably self-indulgent. One tale, The Inebriating Chorus of the Chaffinches, is particularly grievous. Tragically, it takes up almost the entirety of the film’s final 80 minutes (a shorter, far more compelling story is inserted as a merciful interlude about halfway), eroding a lot of the momentum built up to that point. The story revolves around bird trappers who teach chaffinches to sing in preparation for an annual contest. It’s initially amusing to learn about this subculture of men with such an unconventional hobby, watching them train their chaffinches by playing bird songs recorded on their cell phones while the film attempts to convey the nuances of twittering through transliteration, flashing titles on screen such as, “Chew-Yew-Kuik.” However, the story drags on way past its welcome. By the time it reaches the contest, which takes place in an ugly field next to an airport’s perimeter fence, all narration and dialogue have long dried up and we’re left to watch as the men sit around cages wrapped in cloth, drinking beer and listening to their chaffinches hidden from view. This scene is so devoid of interest, narrative as well as visual, that it is punishing in its length. When the entire film wraps up right after the competition has finally finished, the move feels almost perverse.

While it could certainly have used trimming in parts, Arabian Nights is definitely worth the six-hour investment. In its boundless experimentation and sheer audacity, it’s the cinematic equivalent of such mammoths of postmodern literature as Thomas Pynchon’s Gravity’s Rainbow and David Foster Wallace’s Infinite Jest. To watch Gomes’ film entails a rediscovery of the potential of the medium, renewing one’s enthusiasm for its possibilities.