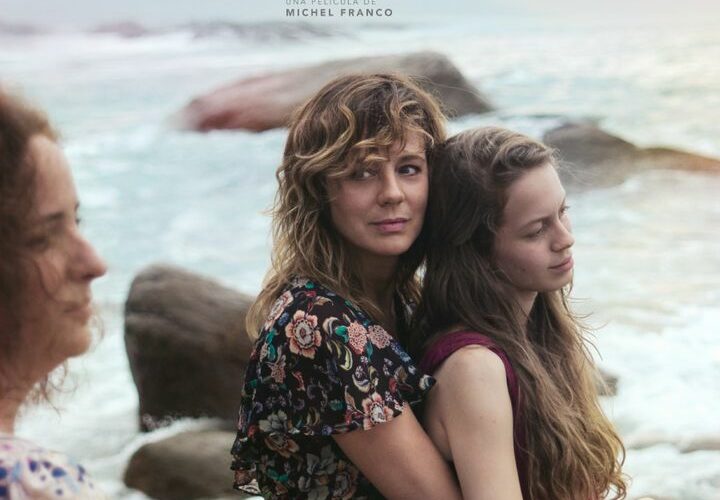 Michel Franco has built a reputation as an actor’s director, with his films featuring no shortage of unforgettable lead performances. Tim Roth’s creepy leading turn in Chronic comes to mind, as well as Tessa Ia in the underseen, worthy After Lucia. The central character in Franco’s latest film, April’s Daughter (Las Hijas De Abril), is April, the mother from hell, played by Emma Suárez. While she reached new attention with Pedro Almodóvar’s Julieta, her latest role confirms we’ll be hearing her name much more in the coming years.

April’s decision to visit her daughters in Puerto Vallarta takes both of them by surprise. Clara (Joanna Larequi) is quiet, depressed, and overweight, and her mom isn’t shy in telling her that either, even making her take laxatives to start a weight loss “program.” Her 17-year-old sister, Valeria (Ana Valeria Becerril), had an unexpected, albeit pleasant pregnancy and has Mateo (Enrique Arrizo), a supportive boyfriend, by her side. Their mother April seems to be caring and affectionate at first glance, with there being no indication of the ruthless abandon-er that is hinted at in previous scenes by the daughters. However, the film gradually reveals the deception that April is known for. She mocks Clara about her weight, tells Valeria she is not fit to be a mother and, once the baby is born, steals Valeria’s child and runs off to Mexico City with Mateo as they embark on a sexually charged affair.

The tension that Franco builds with every scene is crafty and strong, leaving one curious enough to wonder where this narrative is going. He also slyly manipulates his audience into thinking of April as a normal, trustworthy person, but as her deceitful traits start to show, so does our disgust and toxic view of her as a mother. There is carefully calculated emotion and precisely planned involvement throughout, especially by the time Mateo and April embark in their yoga-filled, baby-caring “retreat” in Mexico City. It’s there that, as if we thought it couldn’t be any worse, Mateo is told by April that she wants to be pregnant again with him. If Suárez steals the show and commands every scene she’s in, showing that her character has no conscience whatsoever, Ana Valeria Becerril is another standout as a strong-minded teenager that refuses the emotional abuse of her mother to stand up for what is right. Making her feature-length acting debut in this film, Becerril shows great promise in a performance brimming with genuine emotion.

April’s Daughter marks Franco’s finest directorial work yet, despite a few plot holes and questionably realistic story strands. For example: we still don’t know how April can afford all the things she has; does she get alimony from her ex-husband? Also, can a man be as stupid as Mateo in the way he lets himself be manipulated by April? All those complaints are somewhat diminished because Franco does it all in a way that makes the viewer impatiently angry and involved in the outcome.

April’s Daughter premiered at the Cannes Film Festival. See our coverage below.