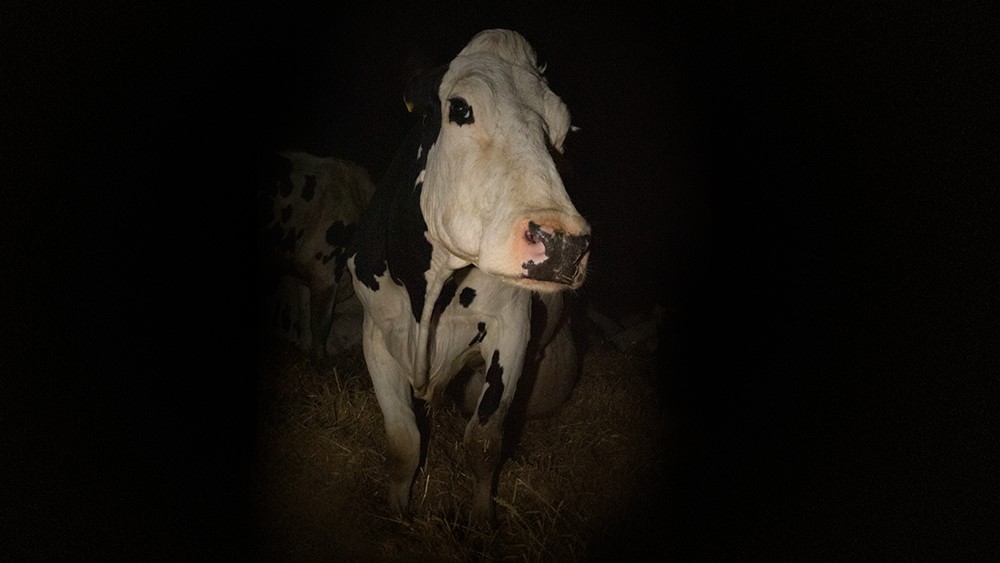 Andrea Arnold, director of stylized social-realist dramas like Red Road and Fish Tank, takes a drastic turn with an in-your-face documentary about a farmyard cow. Yet despite a lo-fi, handheld-camera cragginess, it still has something of the lyricism that marks so much of her work, going back to the Oscar-winning short Wasp.

Arnold’s camera meets cattle at eye-level, as close to the animal’s point-of-view as possible, to follow a milking cow named Luma. Her life is bleak: birthing calves who are then immediately removed from her embrace so that humans can use her milk.

Arnold relentlessly focuses close on the cows’ faces, however messy the camera framing might be, trusting perhaps that Luma’s eyes are the window to her soul. Much like Victor Kossakovsky’s Gunda, to which Cow arrives as an inevitable companion piece, Arnold clearly suggests that these animals have personalities, quirks, and individual traits. And while this lacks the startling visual compositions of Gunda’s black-and-white frames, Cow is equally persuasive at making an argument that we should consider the source of the meat we so often unthinkingly consume.

Arnold says she started this film a few years before its Cannes premiere, the animals having learned to trust her camera as it gets stuck in and intimate with the animals. Some of it looks dangerous—several times, in moments that raise attention to a vérité documentary approach, the cattle bash into the camera.

Sound design is a particular highlight. The squelching underfoot of the farmyard animals, the invasive mechanical whirring of the milking machines, give a window into the sensory overload of cattle farming. The farmers also play tinny pop music as ambient noise while animals get milked. Are they listening? There are the noises Luma makes. Are her moos meaningful? It might be imagination running wild, but by the inevitably grim ending, can we tell the difference between a moo that’s angry or caring or mournful?

And there are more clues to Luma’s personality. There’s a scene in which cattle eat together, but the camera notices Luma staring pointedly into the middle distance. In another she’s watching the stars in the night sky, pondering her place in the cosmos. What is she really thinking? Is she thinking anything at all? Or is Arnold using her camera and editing techniques to imply that these animals think like humans? The question of implication in Cow‘s formal techniques, especially editing, never go away. Is Arnold any better than Disney animators who anthropomorphize their animals with song and dance?

Arnold leaves us to interpret Luma’s behavior while making clear that, through intellectual awareness or instinct, she is a character that changes. Later in the film, as Luma licks clean another dirtied, bloodied newborn, the farmers who surround her say she’s becoming increasingly protective of her calf, more aware of the farmers’ methods as she grows older but tragically unable to stop the inevitable. I wondered, too, whether Arnold, whose fiction films all have women leads, was making a feminist statement here—a female figure having her life dictated by a group of men.

The farmers become an increasingly malevolent presence throughout, always in the background, their faces always out-of-focus like an alien entity. This is a life under complete control by humans. When the cows are let out of their pens into the open air they’re ecstatic, rushing into the fields like schoolkids bouncing out of class for recess. And the audience, too, feels that ecstasy. If humanity wants to feel better about its relationship with animals, maybe it needs less automated, mechanical production, and more free-range thinking. Perhaps that’s a message for filmmakers, too.