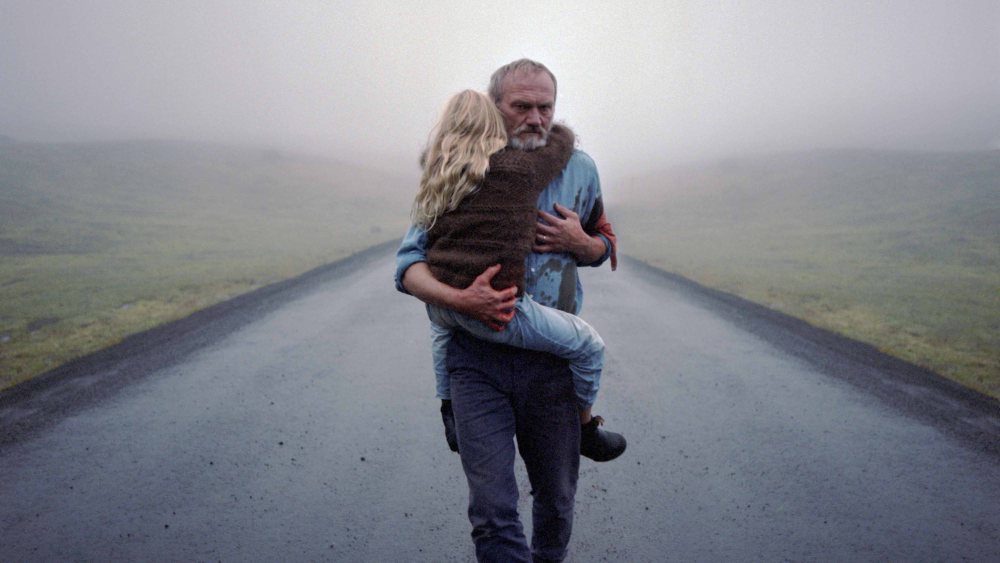 The phrase a “white, white day” refers to a moment when the landscape and sky are so dense with snow, mist or fog that it is no longer clear where the two meet. In Iceland–where this bleak meteorological phenomena often occurs–there is a saying that on a day like that one can converse with the dead. Hlynur Pálmason’s second feature A White, White Day begins with that saying. We then witness a death on one such day as a car veers off the road. The woman driving is–or rather was–the wife of the local police chief. Pálmason’s excellent new film is an examination of that man’s stages of grief.

As darkly comic as it is foreboding–and boasting an outrageously rich and nuanced central performance from the great Icelandic actor Ingvar Sigurdsson, who plays the larger than life Ingimunder, a man more than capable of living up to the scale of his own name–A White, White Day takes the tropes of a psychological thriller but presents them with a virtuosic and austere visual flare. The film’s second shot alone–after that doomed misty drive–is a marvel, a time-lapse image of an isolated farmhouse as it weathers the changing of the seasons. This is Ingimunder’s new home, a place as battered, isolated and in need of repair as the man himself. “What does Ingimunder want?” his counselor asks him early on, “to fix the house” he replies. “And what do you want?” he continues, “not to fix the house.” Betterment through home improvement might be an obvious metaphor but it certainly does the job.

Pálmason first came to our attention with his Denmark-set Winter Brothers in 2017, another film that put a family through the wringer in dismal weather conditions. Brothers was a striking debut but wallowed a bit too often in the bleakness of its fine aesthetic. His latest comes with a welcome dose of humanity. This is thanks to the incandescent performance of young Ída Mekkín Hlynsdóttir (the director’s actual daughter) who plays Ingimunder’s granddaughter Salka. She is the film’s beating heart and her warmth and innocence thaw Ingimunder’s moods and thus the film itself.

Ingimunder is, essentially, a bit of an asshole but he’s disarmed by Salka’s presence and it’s hard to warm to him as a result. Sigurdsson is immense in these moments as the determinedly unsentimental man suddenly cornered by his own sentimentality. That rigid self-sufficiency and temper do get the best of him, however, when, one day looking through his wife’s belongings, he comes across something that suggests she may have been unfaithful, herself.

The director worked in video art before moving to feature filmmaking–Sigurdsson actually appeared in his last project in university, a time when Pálmason approached him with the idea for this film–and that eye for visual detail has not been diminished, even in this, his most tender work yet. There is an obsession with objects, as seen on the coffee table in Ingimunder’s house where the man has collected the minutiae of his wife’s crash. In the film’s coup de grâce, Pálmason surveys each in closeup, inter-cut with images from the crash site. There’s also a great medium angle tracking shot of Ingimunder playing football in which he seldom has the ball, like in Douglas Gordan’s Zidane film. Indeed, Palmason’s focus is not on the game itself but instead the way in which his character stalks a player, or his prey, on the opposing side.

Best of all we get an agonizing close-up of blood spilling beneath a thumbnail. In the scene, Ingimunder has just hit himself with a hammer by mistake and is, understandably, about to blow a fuse. Pálmason will later give equal time to a shot of spilled milk. Indeed, there’s often no use.