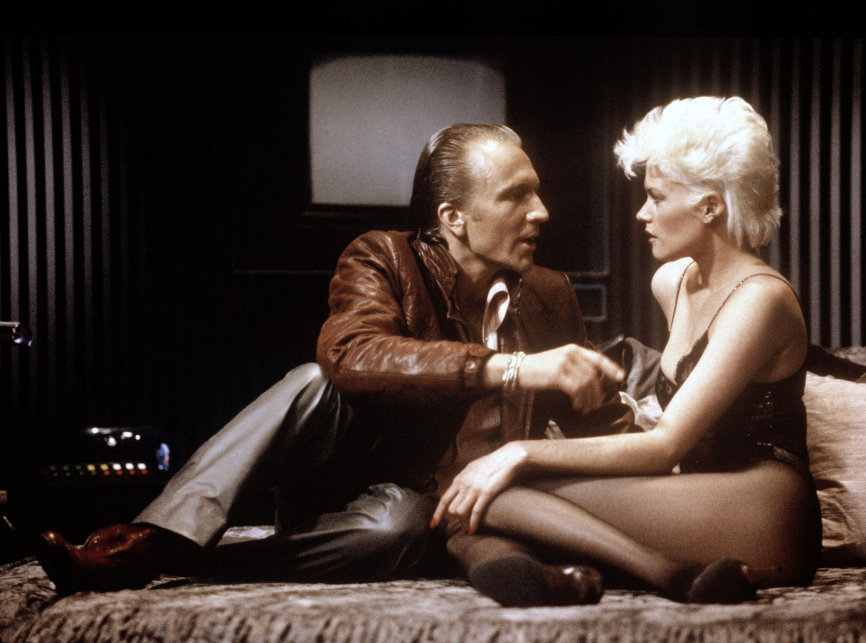 When rewatching Body Double for the third time, its most striking element was, as on my first viewing, Craig Wasson’s performance. As central character Jake Scully, Wasson turns his conventionally attractive looks into an endlessly fascinating nebbishness and awkwardness. In an early scene, Jake simply walks to his car and jumps in the driver’s seat, yet Wasson manages to turn this casual action into one of the most amusing instances of purposefully bad acting. This unquestionably intended ridiculousness in fact informs an audience of the approach required by the entire film: just as it is difficult to take this ludicrous failed actor and naïve man seriously, Body Double itself is better enjoyed with a grain of salt. Right before Jake goes to his car, he orders a hot dog from a street stand that De Palma shoots from the side before gliding to its front. With this voluptuous tracking shot, he creates a grotesquely sexual visual trick completely at odds with the hopeful tone of Pino Donaggio’s soundtrack and Jake’s cheerful dialogue with the clerk. Body Double isn’t a serious film, but it takes its outrageous fancifulness seriously.

Despite his ridiculous presence, Wasson as Jake is also likable for the endless kindness hidden behind his helplessness. Upon seeing his fiancée having sex with another man in his own bed, he leaves quietly, without even slamming the door. His soft spot and empathy is why he won’t exactly fit the profile of witness for the criminal who set him up as such: just like John Travolta’s Jack in Blow Out, but with even more heart, Jake cares too much. He is certainly repulsive as he plays the peeping tom on his new neighbor, becoming a stereotype of the complete loser: cheated-upon, he turns to easy, degrading pleasures that allow him to stay far from a woman he could never hope to conquer, thus satisfying himself with only an illusion of control. Yet Jake cannot help seeing this woman as more than an object of pleasure: when she seems threatened, he investigates her situation and even comes face-to-face with her, risking his dominant position. Again, Jake’s sensibility matches that of the entire film and its director, as this originally powerless woman, objectified and reduced to her sexiness, progressively becomes the drive of the film’s first act by leading Jake to follow her and, later, admitting she had noticed him all along. Eventually removing her sunglasses, Gloria Revelle (Deborah Shelton) literally reveals the person behind the fantasy and starts talking to Jake, demonstrating a range of emotions and finally, to fully contradict her initial position as sex object, expresses her own impulsive desires.

Jake’s kindness does not entirely explain his ability to confront Gloria and go out of his way in helping her. Will isn’t enough for him to act: in the film’s opening scene, he finds himself physically unable to rise from the coffin in which he lays while playing the vampire in a horror-porn film. Unable to even move, he can act as neither an actor or person. He must come to the realization that acting, as pretending, is necessary to survive in Hollywood and the deceptive world at large. After discovering his girlfriend had played the loving fiancé just too well, Jake is literally told that he’s “gotta act” by a ruthless acting coach who purposely confuses the two meanings of the word in a shock psychoanalysis session. To finally become the master of his life and discover the truth about Gloria, Jake needs to combine his kindness with his acting skills.

De Palma’s screenplay, however, complicates Jake’s progression from inaction to action by doubling up on the idea of the world’s illusory nature. Jake wasn’t only deceived when he was a passive man: he is again duped when he starts convincing himself that he can and deserves to have control — that is, when he begins peeping on who he thinks is Gloria Revelle. Voyeurism is itself only an illusory, imaginative form of control, one to which Jake does not give in easily. As Donaggio’s entrancing yet delicate theme, “Telescope,” begins, Jake hesitantly approaches the device and repeatedly looks around as De Palma’s camera remains on him, stressing Jake’s unease with accepting even this moderate form of agency. Yet the deception goes further as the woman he fantasizes over will turn out to be someone else — and, like him, a trained pretender. Lost in this web of illusions, he will not manage to control Gloria and what happens to her.

In these layers of reality, Jake’s adventure becomes not only dreamlike, but the confusing materialization of his dreams of mastery. The illusory dominance he acquires by watching Gloria dance for him every night become (almost) reality when he meets and kisses her, even though she actually isn’t the dancer. De Palma’s exuberant style comes to perfect use when dream and reality become thus entwined: as soon as Jake and Gloria’s lips meet, the camera starts encircling the couple frenetically, as though struggling to capture this spiral of pure pleasure, while a green screen projection of the beach replaces the real one. The enthralling embrace, camera movement, and soundtrack, together with the background’s falsity being just noticeable enough, make this moment bigger than life, a dream coming true and exceeding all of Jake’s wishes and thus still feeling like a vision. Jake is finally beginning to act as he has always wished to, but experiences this sudden dominance as an overwhelming dream state — and one from which he typically wakes up too soon: he does not have sex with Gloria, and she runs away.

It is only after his failed attempt at saving Gloria in a real-life nightmare of obstacles, impotency, and gore when Jake truly realizes that dreaming isn’t enough, and that he must push his performance further: he will actually pretend to be someone else to discover the truth and fulfill his sexual desires. Authenticity has only led to suffering for Jake and death for Gloria, and, progressively, De Palma’s pessimism regarding society and the value it places on the truth becomes vigorously clear. In an unexpected and exhilarating music sequence where Jake plays a parody of his nebbish self accompanied physically and musically by Frankie Goes to Hollywood, the director presents a need to “fake it ’til you make it” as absolute and inescapable. It is telling of De Palma’s joyful cynicism that this scene, an apotheosis of fakery and eroticism, is probably Body Double‘s most memorable. Although Jake “likes to watch,” in this alternate reality of depravity he gets the girl and the orgasm, and while this sequence turns out to be a scene in a porn production, his sexual pleasure seems unsimulated; even more important is that his performance doesn’t stop at “cut.” He keeps playing the porn actor, all leather jacket and slicked-back hair, which enables him to extract information from his co-star, Holly Body (Melanie Griffith). Jake becomes his own body double to approach Gloria’s and the truth.

Finally, all the dreams of control and nightmares of powerlessness that Jake has had to face come to the verge of realization in Body Double‘s climax. Performance becomes the way out of fantasy and into reality when he again finds himself experiencing paralysis in a grave, this one real. By fully putting his strategy out in the open and letting Jake accomplish himself, De Palma offers complete catharsis for his character and audience: the claustrophobic nightmare becomes a scene in a film, and Jake, taken out of his stupor by his director, understands the necessity to perceive this moment as a “shot” he must “get.” This power fantasy is realized as he returns to the tomb and reenters his reality, no longer behaving as himself but as an “actor,” active and corresponding to whom he wishes to be. Jake, now able to perform, defeats the killer, saving his and Holly’s lives.