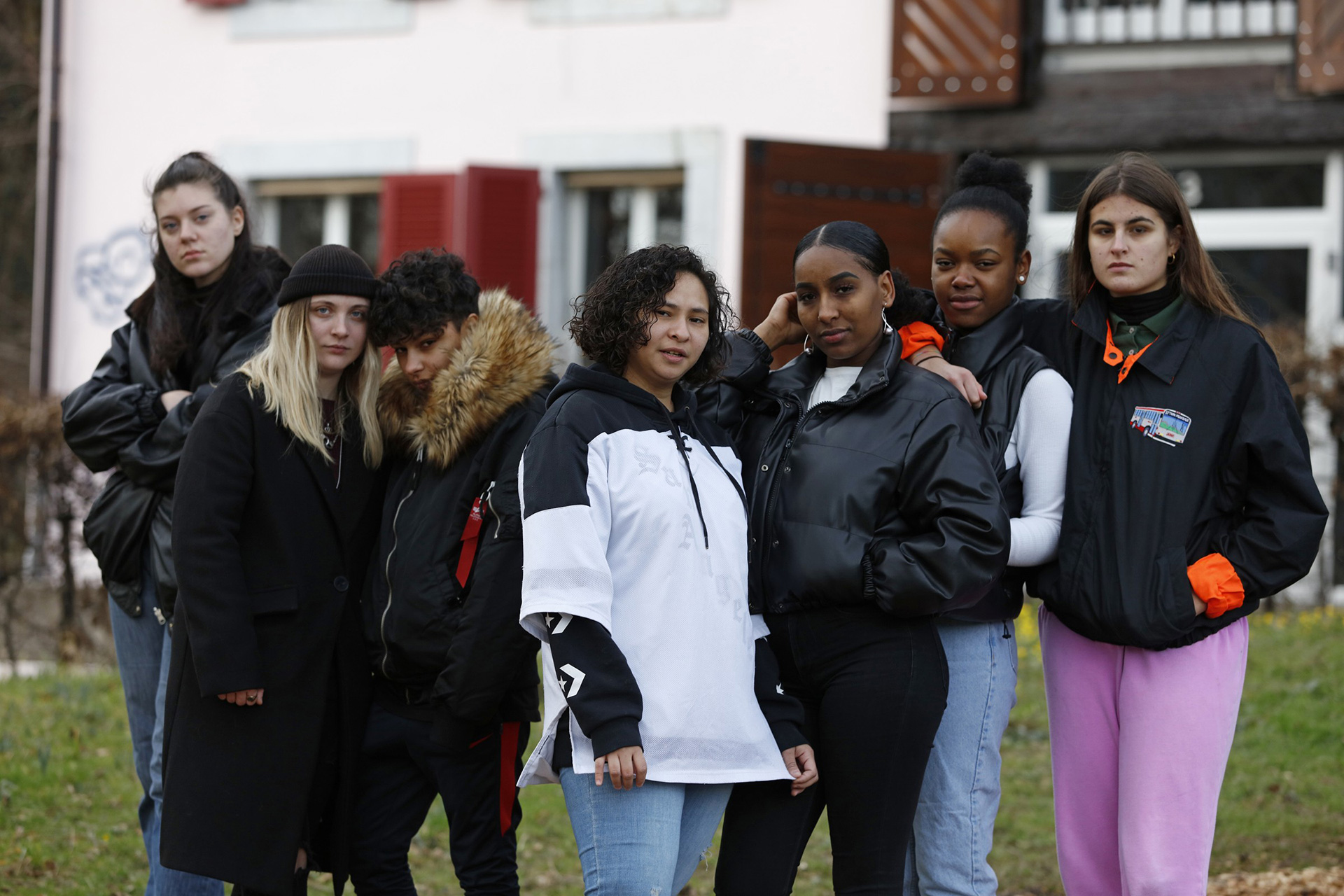 The big draw to Fred Baillif’s fictional look inside a residential care facility housing teenage girls is the fact that he refuses to pretend his setting is anything more than a “safe space.” It’s a place to find separation from whatever heinous environment they’ve left and begin the healing process. Some will inevitably be sent back to the place they sought to escape. Some will remain until their eighteenth birthday and suddenly have to figure out what it means to live alone. And no matter how much they all—residents and staff alike—say that they’ve created a new family to replace the ones that failed them, everyone here is too busy trying to survive their own pain to truly be the rock the others need.

Baillif therefore intentionally draws La MIF [The FAM] as a fractured glimpse into the complexities inherent to uncontrollable elements being thrust into a controlled space. He gives each girl (and Claudia Grob’s manager Lora) a chapter all to themselves with plenty of overlapping scenes cut short or expanded depending on what’s necessary to tell the current subject’s story. For example: we watch as Audrey (Anaïs Uldry) is dragged out by police one night through the screaming crowd of her adoptive “sisters” wondering what’s going on. Audrey’s chapter shows the cause (a crime by law in the binary sense regardless of crucial nuance). Novinha (Kassia Da costa) provides her anger in response. And Lora shares the bureaucratic fallout of a system that too often places itself above its wards.

Because that’s the real issue, right? Our rules and regulations are imperfect and our ability to do what’s necessary is more likely to be handcuffed than free from oversight. Where a board can hide behind the scenes and dictate actions without first-hand knowledge of the scenarios, those who actually care (like Lora and her staff) are subsequently ordered to make those actions make sense to traumatized girls who know it’s all a bunch of bullshit. Even that notion resides in a gray area, though, since such binary responses are often utilitarian ones. While a decision might punish the accused harsher than anyone who was there knows it should, that punishment may also save the rest of the girls by ensuring the home remains open. The group comes first.

As such, the individual can sometimes feel as though he/she is being left by the wayside. And when the group is completely made up of individuals harboring rage, guilt, and shame, those feelings of abandonment and isolation only grow. Just because Audrey and Alison (Amélie Tonsi) are thick as thieves one moment doesn’t mean they will be the next. All it takes is one anecdote or one solitary word to trigger one girl into seeing the other as the enemy belittling her trauma or forcing her to endure it when she least expects it. And the closer the group gets, the greater the possibility such explosions arise. If you trust someone with your truth (rape, abuse, etc.), those words can easily become weaponized against you via misguided self-defense.

By breaking apart each girl’s truth, Baillif ensures the whole remains compelling because the emotions born from those repeated scenes also carry different meaning with different context. To hear Lora tell Novinha and Alison that she’s missed them after being away is a sweet thing to say to maintain the quasi-parental bond between them when those words are within the girls’ story. Shift things to Lora’s perspective, however, and you understand they’re much more than empty sentiments since the circumstances surrounding that lengthy absence repurpose them as evidence of how much she needs the girls to fill her void. Has Lora therefore crossed an ethical line? Maybe. But this job means something different to her after three decades than it does to Malik (Nadim Ahmed) after three years.

This home being a “safe space” and not a “solution” is paramount because it allows for the messiness inherent to its volatile environment. Teens like Précieuse (Joyce Esther Ndayisenga) and Justine (Charlie Areddy) are safe from those who mean them harm outside these walls, but this isn’t a prison. They’re free to move and interact with the other residents and in turn free to alter this forum unsafe in other ways. Sometimes this reality can be healthy where education and lessons in empathy are concerned, but it can also be the opposite if you’re not careful. It’s why the newest staff member’s (Amadou Sylla’s Oumar) words towards the end about wondering what he’s gotten himself into hit so hard. What seems constructive on the inside may be madness.

That’s the slippery slope of dealing with nightmarish horrors and the ways in which sheltering kids from them also shelters them the harsh realities of what awaits them even after they’ve escaped. How will they react when they face rejection? How will they cope with the knowledge that what they’re doing is wrong despite it making them feel better in the moment? The boundaries are forever changing on both sides of the equation. What worked twenty years ago doesn’t necessarily work today simply because the world isn’t the same. So you do your best to evolve without altering the mission. Sometimes it works and sometimes it doesn’t. And sometimes you forget that seeing issues in strangers doesn’t mean you’ll see them at home. Nobody is perfect.

And that goes for Baillif too. He’s a man telling the stories of seven young women and their aging supervisor after all. The fact it’s been said that he let the actors collaborate and build their characters within his narrative (he has a background in social work) is huge to guarantee their voices and knowledge don’t get lost beneath his. It also allows for an authenticity that’s never bogged down by narrative convenience or mainstream desires for happy endings that don’t exist. To hear those who leave thank Lora for everything she’s done and still say suicide is on the table isn’t melodrama. It’s honesty. We can’t erase our trauma—only learn to live with it. That’s why none of these homes’ beds stay empty long.