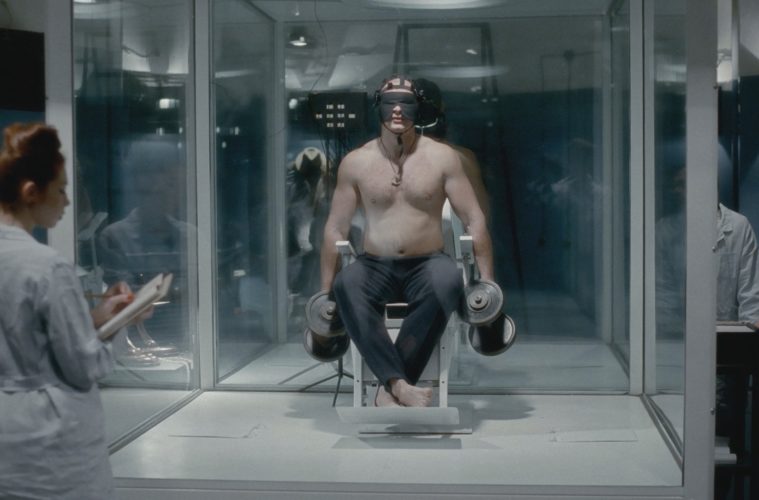 When DAU. Natasha premiered at the Berlinale less than a moon cycle ago it was unprecedented and an entirely unique film. We now have precedent for the DAU movies and they are the DAU movies themselves. Ilya Khrzhanovsky’s constructed totalitarian nightmare is justifiably taking fire at the moment (over allegations regarding consent and the mistreatment of actors) but if Degeneration is to be the last DAU feature to see the light of day it will be a fitting coda. Yes, Natasha was a startling introduction–as provocative as it was fascinating–but Degeneration is something else: the first DAU epic novel and, perhaps, the first masterpiece of the series.

All in all, the two are scarcely comparable. Natasha had a running time of 146 minutes and took place over the course of a few days in the early ‘50s, with only a spattering of events and characters seen on screen. (Indeed, it was the thought of what happened off screen that thrilled the imagination most.) Degeneration runs just a few beats shy of six hours; it takes in a multitude of characters, tones, locations, philosophies, and subplots; a timespan of numerous years; real-life visiting scholars, playing themselves, who conduct behavioral experiments and give lectures, most akin to little Soviet TED talks. There are experiments involving real babies, real monkeys, a Tesla coil, and featuring various occult practices and Eastern philosophies. There are echoes of movies like Salo, The Seventh Continent, and Funny Games–other art films that proved too provocative for their time.

Co-directed by Ilya Permyakov (a visual artist with a PhD in philosophy), Degeneration takes place between the years of 1966 and 68, a decade and a half after the events of Natasha. Through DP Jürgen Jürges’ exquisite 35mm cinematography we are shown the inner workings of the institute–and the interconnected lives therein–in what is to be its final days. It appears that the academics are attempting to create an Übermensch using any means available to them, while Landau (the eponymous scientist) lies in bed with dementia. Perhaps as a result of his absence, the institute has slipped into what a staunch Soviet might call disrepair: the cafeteria workers are continuously getting drunk on the job; young people with Beatles haircuts smoke pot in their rooms; the furniture has gone comically colorful and phallic. We hear rock and roll music; see flares; and so on. The director of operations (Alexey Trifonov) has gained a reputation for sexually harassing his secretaries and so a KGB general is called in to steady the ship. It’s time for a reckoning.

Some viewers will recognize this KGB man (played by ex-prison guard Vladimir Azhippo) as Natasha’s brutal interrogator in the previous film. (He’s not the only returning character, as her co-worker Olga (Olga Shkabarnya) also appears, now married to a scientist, played by Dmitry Kaledin.) Degeneration positions Azhippo as the DAU films’ chief antagonist–a man with all the charms of an oil spill, slowly suffocating everything in sight. Khrzhanovsky throws a match by adding a group of militant Nationalists into the mix. (In DAU fashion, the men are played by three Russian Neo-Nazi–-including Maxim Martsinkevich, a frighteningly built and articulate far-right activist who served multiple prison sentences for racial abuse.) Quietly egged on by Azhippo, who appears quite taken by their dedication, the boys start antagonizing the well-mannered intelligentsia with little trolling jabs–apparently disgusted by their cozy elitism and hypocrisy. Things escalate fast. One need not stress the brain to see what the filmmaker is getting at here.

There is too much to unpack; too many threads to this horrific tapestry. The film is beautifully narrated, in a way, by a renowned Israeli philosopher and Rabbi, Adin Steinsaltz, who talks in voiceover about religion and quantum physics. Marina Abramović appears as a Professor of Anthropogenic Studies. Dissertations could (and surely will) be written on the film’s application of Game Theory. In one breathtaking sequence, a visiting scientist conducts a behavioral experiment with the Nationalists where they are asked to slowly rip a large piece of paper. There is no doubting the authenticity of the scientist’s calls for help when the men later attempt retaliation.

In his 1980 book The Shock of The New, the late great art critic Robert Hughes–in his macho way–wrote, “What has our culture lost in 1980 that the avant-garde had in 1890? Ebullience, idealism, confidence, the belief that there was plenty of territory to explore.” Cinema has often brushed up against these concerns–even some of our most radical auteurs have struggled at times to locate fresh pathways. With all its sex and brutality, and the allegations surrounding its megalomaniacal creator, Khrzhanovsky’s project might not be for this world. However, it remains that rare thing: an artwork with the capacity to tap into our fears and even our hatred; to live in the imagination and to astonish. A shock of the new.