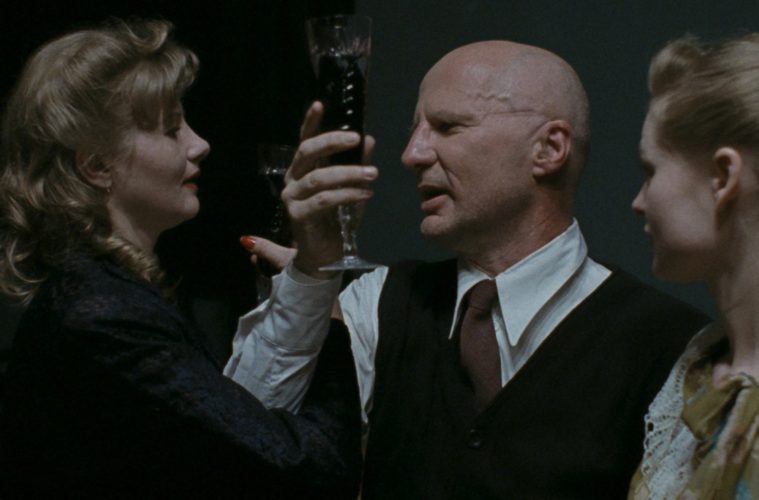 It is no use of hyperbole to suggest that DAU. Natasha already looks like one of the most provocative art films ever made. The first strictly theatrical feature to be released from Ilya Khrzhanovsky’s gargantuan, unprecedented DAU project (12 other films were shown at an immersive exhibition in Paris last year), it offers the viewer a kind of Westworld-style trip into a fully realized Stalinist world; a frighteningly believable place where seemingly no act is deemed unfit for the screen. Further installments are alleged to be on their way to Cannes and Venice. May God help us all.

Has a production ever been so shrouded in mystery? Substantial security and non-disclosure agreements have, for the most part, succeeded in keeping a lid on Khrzhanovsky’s universe: a living, working Soviet town (with running water and electricity) that has apparently been in operation for years; populated with hundreds of cast members (400 characters and 10,000 extras) who live, eat, and presumably dream in-character; the crew wore costumes, too. DAU has its own passports and currency. The performance artist Marina Abramović has been amongst its guests. So has Brian Eno. Khrzhanovsky is said to have already shot 700 hours using only 35mm cameras, which were never hidden, and mostly with natural light. Whole months would go by when nothing was shot at all. The project was first conceived as a large scale but otherwise conventional biopic on the Soviet atomic weapons scientist Lev Landau (nicknamed DAU). Bankrolled by a telecommunications magnate and a host of European and Russian production companies, it has since grown into a Truman Show with no Truman (or maybe all Trumans). Khrzhanovsky’s megalomania similarly brings to mind Charlie Kaufman’s Synecdoche, New York.

Concerns about ethics and consent have plagued the project for years, however DAU. Natasha (which was co-directed by Jekaterina Oertel) provides more questions than it does answers. Apparently set in the early 1950s, the plot follows the eponymous cafeteria proprietor (an astonishing Natalia Berezhnaya) over the course of a few days. The eatery appears to operate next to the DAU institute (a number of intriguing sequences offer a glimpse of the facility’s operations). Natasha and her young assistant Olga (Olga Shkabarnya) serve cold cuts and drinks to a regular crowd of soldiers, scientists and bureaucrats. The vodka flows. One night they invite a group to their place for a party and Natasha ends up having sex with a scientist named Luc (Luc Bigé), who is a foreigner. The authorities take issue with this and bring her in for interrogation.

That’s roughly the guts of it. Khrzhanovsky devotes the majority of the film’s first half to observing the cast in messy drunken frivolity–singing, talking nonsense and fighting–while the remainder is spent on Natasha’s ensuing nightmare. The strange alchemy of the film is that it invites the viewer to probe this reality–perhaps even one’s own reality. So when we see Natasha counting out the takings at the end of the night, one wonders: are these takings real and what are the consequences? And when Olya takes a shot of vodka and it goes down the wrong pipe, is the vomit that results then not real as well? And what of the moment when Natasha drunkenly takes Luc to the bedroom and we glimpse an erection? Khrzhanovsky leaves little doubt as to whether the sex is simulated, but is it okay? And are the fights between Natasha and Olga, or the emotions behind them? Or what of the vaguely creepy moment when Luc puts an incapacitated Olga to bed and removes her hairpins? Indeed, if A is true and B is true, is C not therefore true as well?

However crude, DAU works frightening well at placing the viewer in this world of uncertainty and blurred realities. Shot by cinematographer Jürgen Jürges, we only occasionally glimpse the scale of the set (the few exterior shots are at night) but the interiors offer more than enough to suggest the oppressiveness of the architecture (even the doors slam closed with real weight behind them). The seemingly improvised dialogue is a bit shouty and unconvincing at times (the audience at its opening screening were on more than one occasion brought to laughs) but the sheer audacity and realness of most everything else makes that ultimately something of a moot point.

There are reasons to admire DAU that go beyond this absurd pseudo-reality-TV spectacle. Khrzhanovsky’s fearless and uncompromising film is an attempt to put both participant and viewer in the psychological vice of a totalitarian regime. (He has described it as a “meticulous historical simulation.”) The authenticity of Natasha’s interrogation recalls worrying tests like The Stanford Prison Experiment–in that the levels of consent and reality remain queasily unclear. Natasha features one already-notorious act of sexual assault (the scene already appeared in the Paris exhibit) that is sure to push any viewer to the brink of acceptance. Yet I have frankly seldom felt as rattled in a cinema; and perhaps even moreso during one of Khrzhanovsky’s closing shots: in which we see Natasha walking home at night; her sense of autonomy forever decimated; and an officer with an attack dog following just a few paces back. We know it’s not real, but what does real even mean anymore? It is a staggering film; one that defies categorization and a unique achievement that must be seen to be believed.