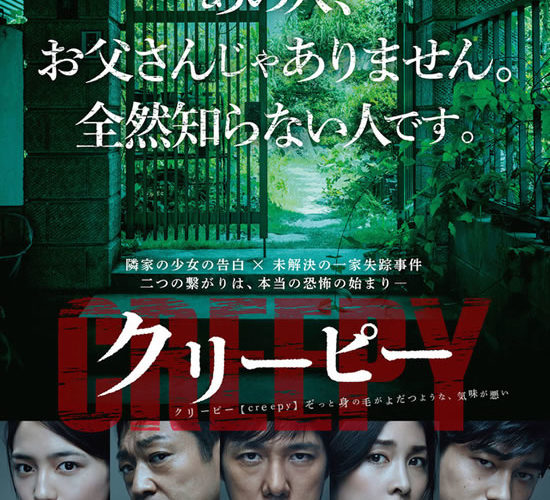 One has to appreciate Kiyoshi Kurosawa’s winking self-awareness in calling his new feature Creepy. It’s as if the Coen brothers released a film entitled Snarky, or Eli Roth named his next stomach-churner Gory. Kurosawa, who’s still best known for Cure (1997) and Pulse (2001), two rare outstanding examples of the highly variable J-Horror genre, instills a sense of creepiness into virtually anything he does, regardless of subject matter. His latest, which sees him return to the realm of horror after excursions into more arthouse territory, certainly lives up to its name and has a lot of fun doing so. In the excellent, mood-setting opening, we’re introduced to Koichi (Hidetoshi Nishijima), a brilliant detective with an ill-fated fascination for psychopaths. As he interrogates a young and cheerfully remorseless serial killer, he can barely contain his excitement at being able to probe such a compelling subject. His smug over-confidence results in a hostage situation that culminates with both the killer and hostage dead and Koichi stabbed in the back with a fork. This experience pushes him to turn in his badge and get a job as a professor of criminal psychology in the hope that he and his wife, Yasuko (Yuko Takeuchi), will lead a more stable and secure life. This being a horror film, things don’t quite turn out that way.

Following a “One Year Later” title card, Yasuko and the recovered Koichi move into a new house in a quiet, three-space cul-de-sac. From the get-go, something feels amiss. One neighbor all but slams the door in their face when they come knocking with chocolates, while their other is, simply put, a full-blown freak. Introducing himself as Nishino (Teruyuki Kagawa), he is a small, hunched-over man with an awkwardly stiff gait, an eerie smile, and a piercing, calculating stare, his vibe at once unctuous and predatory. In real life, any sane person would take one look at him and run for the hills. When, after a particularly perturbing encounter, Koichi tells Yasuko that they have nothing to fear because “most killers seem normal,” you can practically feel Kurosawa nudging you in the ribs.

With the threat to the protagonists unequivocally established, the ensuing narrative is essentially a smokescreen that allows Kurosawa to raise tension in the lead-up to a grand finale. Again working with Akiko Ashizawa, his regular cinematographer over the last decade, he constructs elaborate compositions that almost always contain elements furtively moving in the periphery. Together with the camera’s constantly creeping pans and dollies — as well as the bilious green tinge that permeates each frame — the film thus generates a sense of unease that intensifies very gradually and unremittingly, reaching an extreme pitch by the time of its denouement.

Though the middle stretch does go on for longer than is strictly necessary – a good 20 minutes could easily have been shaved off without forsaking anything crucial – the eventual pay-off doesn’t disappoint. Featuring an industrial vacuum cleaner-cum-sealer, a mysterious mind-control drug — both spooky and narratively convenient, considering the characters’ screamingly preposterous behavior — and a pit-equipped basement that competes with The Silence of the Lambs for most terrifying movie cellar of all time, it’s exactly the type of juicy, creatively twisted, and hilariously unreasonable climax you expect from a Japanese horror film.

Creepy premiered at the 2016 Berlin International Film Festival and opens on October 21.