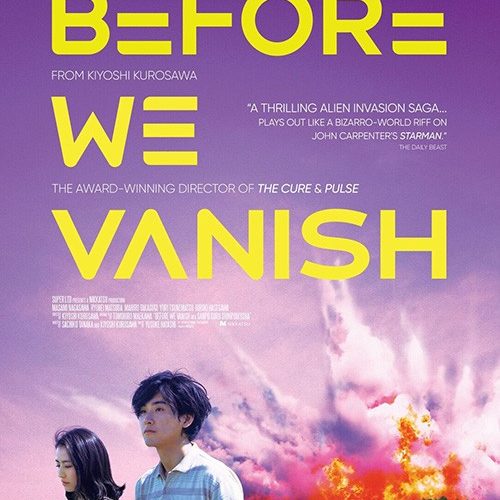 Cannes Review: ‘Before We Vanish’ is a Playfully Philosophical Exercise in Apocalyptic Sci-Fi

There are few directors who would choose to take a semi-sincere approach to a lengthy pseudo-philosophical science-fiction film — especially not one that lightly pries into our fundamental psychological foibles — but there are few directors quite like Kiyoshi Kurosawa. The prolific Japanese filmmaker behind such varied genre gems as Pulse and Tokyo Sonata has constructed a sort of skittish and overlong, albeit pleasantly existential oddity in Before We Vanish, an alien-invasion B-movie packed with A-grade ideas and craft. Nail down your windows. Lock your doors. It’s the invasion of the concept snatchers.

The story follows three extraterrestrials who have been sent to Earth to act as scouts for an imminent invasion. Their orders are to inhabit the bodies of three humans in order to research some of the more abstract concepts of human life. They do this in a sort of cut-and-paste manner by first convincing a hapless human to visualize an idea (something such as work or self) before taking that “conception” from them and attempting to understand it. It’s the sort of thing that might have come off as quite contrived had Before We Vanish not been so light on its feet. Indeed, you would struggle to ever call Kurosawa a pretentious director, and his latest is, in fact, at its most playful when attempting to imagine not only how an alien might consider a new conceptual idea, but also how a human might operate without it.

Before any of this psychological research takes place, however, the invaders need to find a “guide.” Our chief alien (Ryuhei Matsuda) enlists Narumi (Masami Nagasawa), the wife of the man he’s inhabited, who won’t accept the fact that her husband, named Shinji, is no longer there (the unlikely ensuing romance between them acts as the film’s central arc). Alien Shinji grows more and more fascinated with the planet he’s invading, but his two allies are far less empathetic. The meanest — who naturally takes the form of a schoolgirl — spends the opening scene slaughtering her host’s family.

These more aggressive aliens enlist the help of a journalist (those bitter cretins) to guide them around and — in another diverting subplot — the hack faces his own dilemma of choosing what side he’ll ultimately be on. The film rolls along at a leisurely pace (too leisurely, perhaps) as the aliens attempt to rendezvous in order to set up a communication device that will trigger the oncoming extermination of humankind, and so on and so forth.

Kurosawa is picking away at some obvious but nevertheless compelling notions here: would the human race be better off without such concepts, or would the stripping away of these ideas merely add up to a mass lobotomy? The answer is somewhere in-between, perhaps, and whatever the case, Kurosawa is too smart to let his film get weighed down by such needless moralizing. Indeed, anytime it feels that Before We Vanish is getting too caught up in its thought process, the director is always ready with a flash of ultra violence, slapstick humor, or a pithy line. “Is it the invasion?,” Narumi asks at one point. “No, it’s the sunset,” Shinji replies. It’s the apocalypse met with a roll of the eyes.

Before We Vanish premiered at the Cannes Film Festival and opens on February 2. See our coverage below.