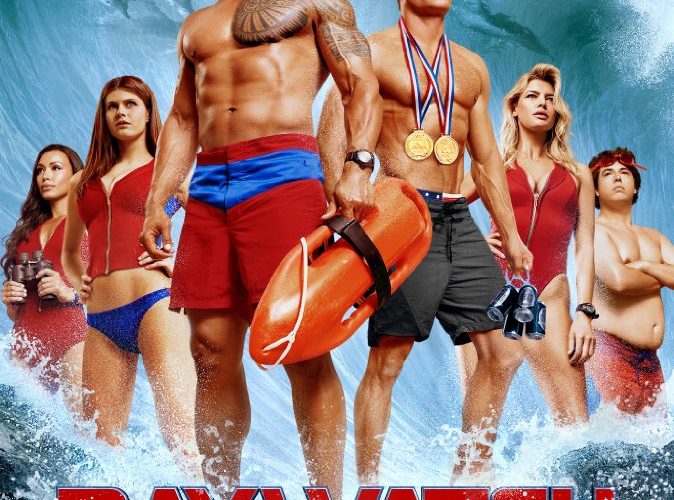 Blame it on 21 Jump Street. In 2012, Phil Lord and Christopher Miller rebooted a silly, cult television series with a clever wink. It was a hit that spawned a hit sequel. Now we have Baywatch, directed by Seth Gordon, a not-so-clever adaptation of an ultra-silly television series that got popular in the 90s. Dwayne Johnson stars as Mitch Buchannon, the studly leader of Baywatch, the world’s most elite lifeguard crew. Filling out his batch of loyal Baywatch-ers are Stephanie Holden (Ilfenesh Hadera), CJ Parker (Kelly Rohrbach), Summer Quinn (Alexandra Daddario), Ronnie (Jon Bass) and Matt Brody (Zac Efron), a disgraced Olympian forced to fulfill his community service with the team.

There are drugs on the beach and it’s on Mitch and co. to get to the bottom of things. But, also not really. It’s actually a job for the police, as the screenplay (from, take a deep breath, Damian Shannon & Mark Swift with story credits for Jay Scherick & David Ronn and Thomas Lennon & Robert Ben Garant) reminds us over and over again. From start to finish, it feels like a film that’s fallen victim to one too many studio-funded rounds of script changes. There’s a severe tonal problem this movie never reconciles. It wants to be a self-aware, R-rated comedy and a straightforward action picture. At any moment, it’s one or the other but never both.

Johnson has built himself into one of our most likable and reliable movie stars, but his charm is wasted here. The same goes for Efron, whose character motivations are muddled to such a degree it becomes genuinely bewildering. It wouldn’t usually standout in this kind of easy summer fare, but there are legitimate editorial decisions throughout that beg the question: were they filming a different movie before they decided to adjust it in post-production? Certain reaction shots don’t match the lines of dialogue they’re meant to be reacting to, while plot points are repeated in multiple scenes, as though there’s an ongoing assumption that we, the audience, may be lost. Let me assure you, you will not get confused by the narrative. There’s a diabolical villain (Priyanka Chopra) with a fairly simple plan that takes our heroes the majority of the film to figure out.

Rohrbach is a stand-out in the role Pam Anderson made famous, doing her best to be ogled while making fun of (and having fun with) the fact that she is only there to be ogled. In fact, she’s got one of the only funny bits in the movie, in which she lets a metaphor before a competition darkly morph into a confession about her absentee father.

The requisite cameos pop up, haphazard and unnecessary though they may be. Gordon — who’s made a career in studio comedies — does not have a clear handle on the action sequences, relying too much on green screen and special effects, not to mention the bombastic, clunky score from Christopher Lennertz. Add to everything an especially laugh-less gag reel and you have a big, bad summer miss.

Baywatch is now in wide release.