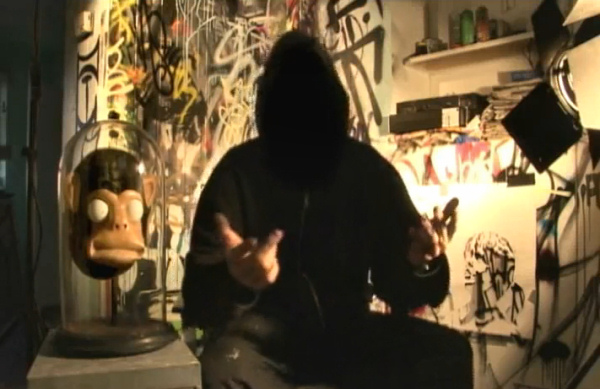 Banksy Breaks His Silence on ‘Exit Through The Gift Shop’; Hints at Next Film Narrowing down my year-end list, I can’t get Banksy‘s Exit Through The Gift Shop out of my head. The documentary on all things street art is much more than just that, and even upon re-watch it holds up wonderfully. The reclusive street artist that “directed” the film has been in the dark, but now he has finally opened up.

In an interview with documentary blogger AJ Schnack over at All These Wonderful Things, Banksy runs through a number of burning questions. I’ll post some of the great excerpts below, but head over there for the full thing. It’s full of excellent quotes like: “If Michaelangelo or Leonardo Da Vinci were alive today they’d be making Avatar, not painting a chapel.”

Obviously the story is bizarre, that’s why I made a film about it, but I’m still shocked by the level of skepticism. I guess I have to accept that people think I’m full of shit. But I’m not clever enough to have invented Mr. Brainwash, even the most casual on-line research confirms that.

Ordinarily I wouldn’t mind if people believe me or not, but the film’s power comes from the fact it’s all 100% true. This is from the frontline, this is watching an art form self-combust in front of you. Told by the people involved. In real time. This is a very real film about what it means to ‘keep it real’.

Besides, if the movie was a carefully scripted prank you can be sure I would’ve given myself some better lines. I would’ve meticulously planned my spontaneous off-the-cuff remarks. I love that famous Jack Benny come-back to a heckler – “You wouldn’t say that if my writers were here.” But I’ve always wondered – did his writers tell him to say that?

On if he has seen the film with an audience:

Unfortunately I haven’t seen it with an audience. The nearest I got was going to the cinema to see Precious. They played my trailer beforehand and someone two rows in front shouted “OH MY GOD, BANKSY IS SUCH A SELL-OUT” and I shrank into my seat.

On what his collaborators think of the film:

I paint my own pictures but I get a lot of help building stuff and installing it. I have a great little team, but I tell you what – they all hate this fucking film. They don’t care if its effective, they feel very strongly that Mr Brainwash is undeserving of all the attention. Most street artists feel the same. This film has made me extremely unpopular in my community.

On documentary as a genre:

I’m from a generation for whom documentary isn’t a dirty word. It doesn’t have to mean endless shots of penguins set to classical music. Michael Moore and Morgan Spurlock seemed completely punk to me. And the most punk thing of all was they brought their story undiluted to the multiplex.

Documentaries have an important role in recording culture that’s unlikely to make it into the history books. DOGTOWN AND Z-BOYS was the Bill of Rights for skate culture. Having said that, my film was never going to be an authoritative history of street art. Or even an authoritative history of the selling-out of street art. We realized halfway through the edit that the ending needed to be as unresolved as possible. I’ve learnt from experience that a painting isn’t finished when you put down your brush – that’s when it starts. The public reaction is what supplies meaning and value. Art comes alive in the arguments you have about it. If we’ve done our job properly with EXIT, then the best part of the entire movie is the conversation in the car park afterwards.

If he will make another film and what he thinks of the form:

The art I make is similar to film – my paintings are essentially freeze frames from movies that are playing in my head. I think its pretty clear that film is the pre-eminent art form of our age. If Michaelangelo or Leonardo Da Vinci were alive today they’d be making Avatar, not painting a chapel. Film is incredibly democratic and accessible, it’s probably the best option if you actually want to change the world, not just re-decorate it.

Exit Through The Gift Shop is now on Netflix Watch Instantly in HD. Watch the first five minutes below:

What did you think of Exit Through The Gift Shop? Can Banksy repeat success with another film?