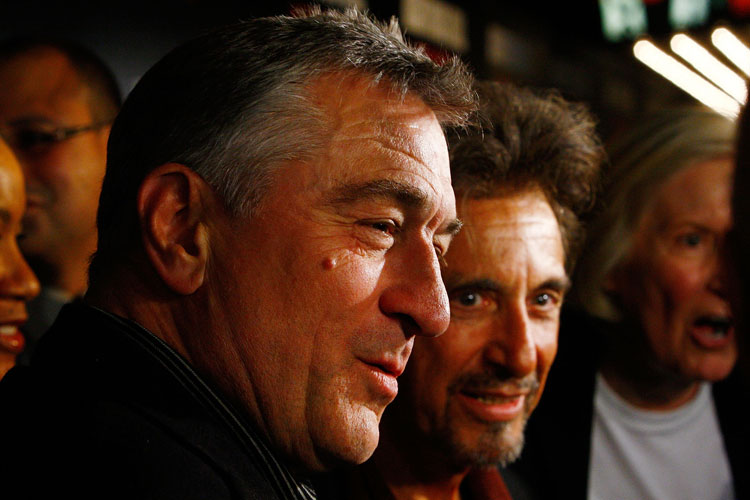 Returning to festival circuit after some perhaps uninspired choices, we praised the performances from Al Pacino in both The Humbling (review) and Manglehorn (review) at Venice Film Festival. Both dramas have afforded the actor the opportunity to open up about his next projects and today brings an update on one of his longest-gestating, and most highly-anticipated, dramas, along with another.

When we last heard about Martin Scorsese‘s The Irishman it was said to be next in his queue following Silence, which should begin production late this year. Teaming Pacino with Robert De Niro and Joe Pesci, things look to be on track as the actor confirmed it’s still moving forward in a recent interview with The Daily Beast. While he made no mention of the rumored Harvey Keitel, he did reveal that Boardwalk Empire star Bobby Cannavale (who reportedly took part in a table read of Steve Zaillian’s script last year) is now part of the cast.

Based upon Charles Brandt‘s book I Heard You Paint Houses the film follows Frank “The Irishman” Sheeran, an ex-Mafia contract killer who, by his own account, carried out over 25 hits. “I don’t think I’ve gotten close to doing something with Marty. I know him. He’s such a great director,” Pacino says. “[At that period [in the 1970s] we were sort of split. Scorsese made movies with De Niro and I was making movies with [Sidney] Lumet. But I can’t think of a Scorsese movie that I would have been right for.” Well, it looks like he’s finally found the right fit and he’s looking forward to a certain reunion, saying, “Oh, I love Bobby [De Niro]. I love him. Getting the opportunity to work with him, especially on something that is with one of the greatest directors ever.”

We couldn’t see this one heading into production until later next year, but hopefully this is the last update until we hear of a production start. Meanwhile, Pacino confirmed his involvement in reteaming with Brian De Palma for the Joe Paterno biopic Happy Valley. “It’s developing,” he says. “I see [the story] as a major fall—it’s a fall of a person.” Pacino adds, “It’s Shakespearean, Paterno’s story.” After viewing the documentary of the same name that premiered at Sundance, Pacino says it was a “stunning movie” and “I kept thinking, it’s not the story of Paterno—that’s part of it, but it’s about Happy Valley. And it’s about all of us. It’s the way it’s sort of depicted and the intensity and the thought and how it makes you think. You go feeling one way and you leave and you sort of don’t know what to do.”

As we await both projects, watch Pacino’s press conference for Manglehorn at TIFF: