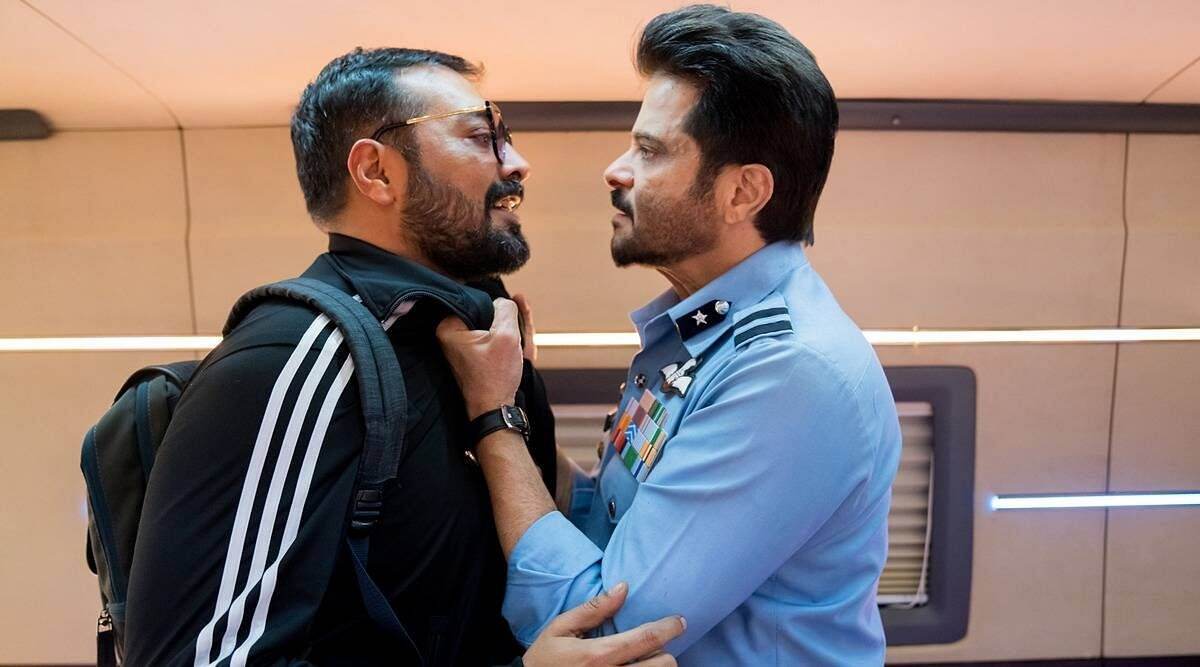 Over the 21st century, Bollywood cinema has entered into a completely different era of filmmaking and storytelling than was being made in the decades prior. Actors and directors who started their careers in the ‘80s and ‘90s have experienced such a drastic shift from their beginnings to what they are doing now that their older works seem almost archaic and unrecognizable. This has led, expectedly, to many of Bollywood’s artists making self-reflexive work that also reflects on the industry in general––Fan, Sanju, The Dirty Picture, Luck By Chance, and Shamitabh are just a few examples. Vikramaditya Motwane’s AK vs AK is the latest and best of the lot.

One of India’s most interesting filmmakers, Motwane’s movies are constantly in dialogue with both India’s cinematic past and its socio-political present. In his latest offering, he dives headfirst to deconstruct Bollywood’s cinematic identity crisis, where two historically lauded members of the industry––film director Anurag Kashyap and actor Anil Kapoor playing exaggerated versions of themselves––lay their own personalities and emotions bare in their case for their brand of cinema. The former is an enfant terrible creating dark, transgressive thrillers that pushed Bollywood into embracing more taboo subject matter in its cinema and the latter is one of India’s most famous actors who starred in massively successful mainstream hits in the ‘80s and ‘90s, from Mashaal to Tezaab to Parinda, not to mention a few more recent Hollywood turns in Slumdog Millionaire and Mission: Impossible –– Ghost Protocol.

At a panel discussion, Kashyap and Kapoor spout passive-aggressive disagreements about the “state” of Bollywood and its identity as a cinema industry culminating in a physical confrontation regarding who is more important to cinema: the director or the actor. Thereafter, Anurag Kashyap hatches a diabolical plan to make a meta-picture where he kidnaps Anil Kapoor’s daughter Sonam (also a real-life Bollywood actress) and films it cinema verité style with an unwitting Kapoor as his main star––imagine a darker version of The Truman Show. The resulting film, which exists within AK vs AK and is also a thematic extension of it, is a mirror reflection of 21st century Bollywood cinema, combining social themes within a widely popular genre entertainment format. It hits points on both sides of the art and entertainment divide in Bollywood while also reflecting a greater Indian culture’s effect on and influence from said industry.

India is a country in which cinema bleeds into culture much faster than it does in other places. Movies are at once both laughed off as unserious yet an indelible influence on everyday life. Motwane examines this using India’s obsession with celebrities and the industry to blur the lines between film and reality. Throughout the film, characters and the audience are forced to contemplate the reality of every situation. At one point, when Kashyap shows Kapoor proof that his daughter is kidnapped, he responds, “How do I know that is not from one of her sets?” In a sequence at the police station where Kapoor enters to inquire about his kidnapped daughter, an officer stops the proceedings to ask for a selfie. Kashyap says to Kapoor when he first hooks him into the film project, “You will cry real tears, you will bleed real blood, and for the first time in your career you will not have just acted… you will have lived your role.”

The irony is apparent and Motwane is essentially calling a truce between Kashyap and Kapoor using his movie as the format to make the argument. Motwane incorporates directorial styles that reference and compliment past works from both Kashyap (halogen lighting, shaky cam, harsh shadows) and Kapoor (slow-motion intros and outros, military uniforms, stage dancing). This power struggle of style and vision between director and actor is both a metaphorical crisis in the film and a real one happening in the industry. The dynamic between Kashyap and Kapoor, a modern director and an old-school Bollywood star, respectively, gets to the heart of a thematic and generational shift in Bollywood’s approach to its films. Namely, that the industry found itself both creating a more diverse, sexually liberal, bolder, and more socially aware cinema while also homogenizing with a global cinematic template that slowly eroded its “Indianness.” In both embodying this reality while deconstructing it within the film, AK vs AK is the latest example of Bollywood staring at itself in the mirror in the midst of a shifting culture.

AK vs AK is now on Netflix.