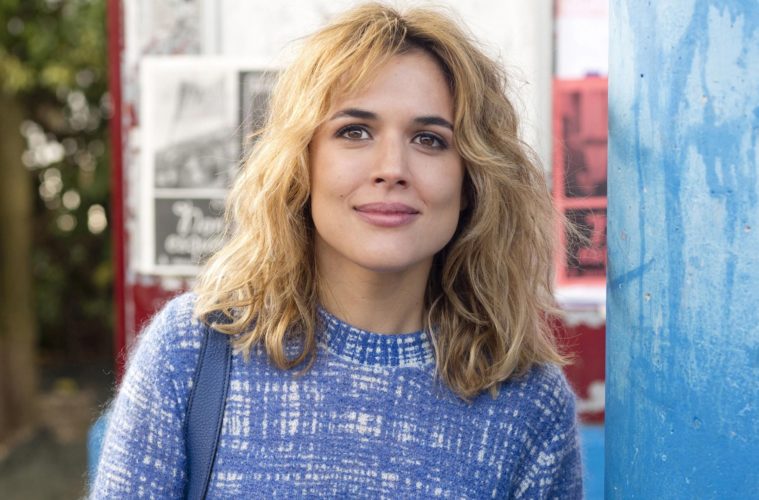 Adriana Ugarte on Pedro Almodóvar’s Meticulousness and Transforming For ‘Julieta’ Marking his return to the female-centric dramas with which the director made his name, Pedro Almodóvar stopped by Cannes Film Festival with Julieta. Adapted from a series of short stories of Canadian Nobel prize-winning author Alice Munro, the story follows a woman who recalls the pivotal moments of her adult life. We said in our positive review from the festival, “It’s charmingly self-aware in its use of kitsch and melodrama — almost to the point of self-parody — and, while small in scope, it’s also one of his lusher and leaner offerings.”

While at the festival, we got the opportunity to speak with Adriana Ugarte, who plays the younger version of Julieta. We discussed the audition process, her background, what it was like playing the same character as Emma Suárez, the meticulousness of Almodóvar, and more. Check out the conversation below and our interview with Emma Suarez here.

What did working with Pedro Almodóvar mean to you?

I’m from Madrid and, growing up, I went to the cinemas with my parents a lot. I saw many of Pedro’s films in my teenage years and I’ve wanted to be an actress since I was little, so of course it’s a dream to work with him. When I found out he wanted to work with me, at first I thought there must have been a mistake.

How did you get this part? Was it through a regular casting process?

Yes, it was the usual casting process. The only difference was that the casting directors wouldn’t tell me who the director of the film was. They asked me to prepare a text and said it’s for a film by one of the most important directors of the country. Of course I went to the first audition with some possible names in my mind but I honestly didn’t know for sure. Considering Pedro is known for working with the same group of actors again and again, I didn’t think it would be him. After the first audition, the casting directors got back to me to say the director liked what he saw and asked me to do the same text again, but in a different way. Which I did at my second audition, still not knowing who I was doing it for. This secrecy actually excited me. After the second audition, they told me the director was satisfied with my work and that his name was Pedro Almodóvar. I was very grateful that I hadn’t known about it until then! After that I went in for a third audition, doing again the same material, but in yet another way. It’s how Pedro normally works by the way. He can shoot the same scene with the same lines in 20 different ways. After that they sent me to meet Pedro at his house. I was extremely nervous but I went and fell in love with him pretty much the moment we saw each other.

And how was it playing the same character as Emma Suárez in the same movie?

I love Emma. I remember meeting her for  he first time six years before Julieta at a festival. Now you should know that I eat a lot, especially when I’m nervous. Because of that I got myself into the hospital one day. Emma was nice enough to accompany me to the hospital and spent the whole day with me. She really took care of me. We chatted about maybe working together someday – I had been an admirer of her work forever – and crazily enough, six years later, Pedro Almodóvar asked us to play the same role in his movie.

Almodóvar’s movies always look amazing. Does it just look that way to the audience or did you also feel it as an actor?

Oh, for sure. It’s completely different from all my other acting experiences. Even if you have worked in very fancy productions, the process is different on an Almodóvar film because his vision is so detailed and he can actually realize that vision for he knows every department inside out. He values all departments the same and decides on every single detail, from the accessory you wear to the ornament on the table. He cares about your soul, your smile and your eyebrows equally. That’s why he has such a personal and distinct style. At the same time, he’s also someone who’s always learning. He observes everything around him with curiosity. When he looks at you, you can feel how he’s studying you, which can be a little scary at first. But then you realize he’s such a lover of life in general that you can give yourself to him and feel totally secure.

You look quite different in person than how Julieta looks in the film. Can you talk about the transformation?

Well I am not blonde to begin with. I had very dark, almost black hair. It took a long, delicate process to get my hair that blonde. For Pedro it’s critical to find this perfect blonde color, and I agree. One might say that’s such a superficial aspect of the character, but your hair also talks and says things about you, just like your lips, your hands, your skin. Your body is always talking. To understand the importance of this physical form of expression has been a huge discovery for me.

How did you get into acting? Did you come from an acting family?

No, my parents respect and are happy about what I do right now, but they didn’t want me to become an actress initially. My mother is a lawyer and my father is a judge, but they’ve always been very interested in culture and especially in cinema. Starting at a very young age, they’ve taken me and my brother to the cinemas both in and out of the country. But I guess in the end it just came down to the fact that I needed to be an actress. I knew that when I was five. Maybe that has something to do with how shy I am as a person. I think around the age of five, I found that I’m most comfortable and free when I’m playing someone else.

Julieta premiered at the Cannes Film Festival and will be released in the U.S. by Sony Pictures Classics this year. See our coverage below and the full press conference above.