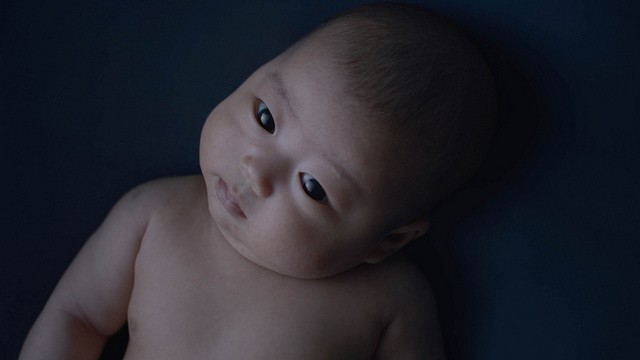 Earlier this week, A24 dropped a mysterious teaser trailer for what was thought to be a new science-fiction feature film from the company. With its slick near-future design and life-encompassing text overlays, many thought it may signal the return of Upstream Color and Primer director Shane Carruth, but now we’ve found out what this trailer is previewing. It’s not a feature film at all, and it will meet the eyes and ears of an audience very soon.

One of our eagle-eyed readers spotted that a still from the Sundance-bound short Toru that matches with the teaser. We did our own digging and furthermore, snaps from the set correspond with footage from the trailer. Directed by Jonathan Minard and Scott Rashap, the synopsis for the short reads “an infant’s life is transformed by a new technology,” which certainly matches up with what this preview entails.

Shot by DP Matt Mitchell and featuring a score by Brian McComber (Krisha and former Dirty Projectors member), the short is 14 minutes long and in Japanese with English subtitles. The idea for the film was hatched by Rashap while in NYU and production kicked off around a year ago; somewhere along the way, A24 picked it up and developed this inventive marketing launch. With Sundance kicking off next week, check back for reactions from the premiere and a synopsis from Wicked Local below.

With a science fiction undercurrent, Toru centers on the story of a baby boy, named Toru, born with a fatal lung condition. As he only has a few days to live Toru’s parents sign him up for a trial experiment that would simulate a full life in a matter of days.

The film follows Toru’s dream-like life simulation as a boy named Todd growing up in a New England suburb, and concludes in futuristic Japan.

Featuring the cast of Ai Kiyono, Yasu Suzuki, Tatsuo Ichikawa, Tsukasa Kondo, John Mullen, and Tamara Hickey, check out the trailer below if you missed it.

Toru premieres as part of the Shorts Program 1 on January 19th at Sundance.