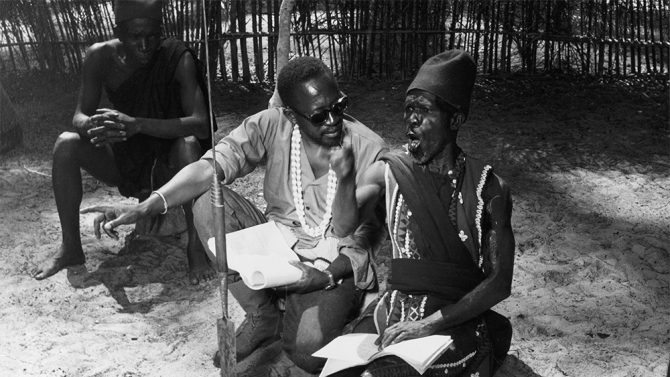 A Legend of African Cinema Is Highlighted In Trailer for ‘Sembene!’

If the upcoming De Palma and Hitchcock/Truffaut have whetted your appetite for great-filmmaker documentaries, consider adding a third, lesser-known subject to your roster. That man is Ousmane Sembene, who, despite being long hailed as “the father of African film,” hasn’t been granted any great exposure in non-African territories — an error that we might start to correct with Samba Gadjigo and Jason Silverman‘s Sembene! (That’s their exclamation point, for the record.)

Word out of Sundance was positive, with most agreeing that even the familiar should come away with something valuable, while novices (i.e. most viewers) will be both entertained and encouraged to seek out his material. How it ultimately affects Sembene’s perception among cinephiles will remain to be seen, but for bringing him out in the first place — and even letting us peek at hard-to-find work — Sembene! is immediately an item of note.

In 1952, Ousmane Sembene, a dockworker and fifth-grade dropout from Senegal, began dreaming an impossible dream: to become the storyteller for a new Africa. SEMBENE! tells the unbelievable true story of the father of African cinema, the self- taught novelist and filmmaker who fought, against enormous odds, a 50-year battle to return African stories to Africans. SEMBENE! is told through the experiences of the man who knew him best, colleague and biographer Samba Gadjigo, using rare archival footage and more than 100 hours of exclusive materials. A true-life epic, SEMBENE! follows an ordinary man who transforms himself into a fearless spokesperson for the marginalized, becoming a hero to millions. After a startling fall from grace, can Sembene reinvent himself once more?