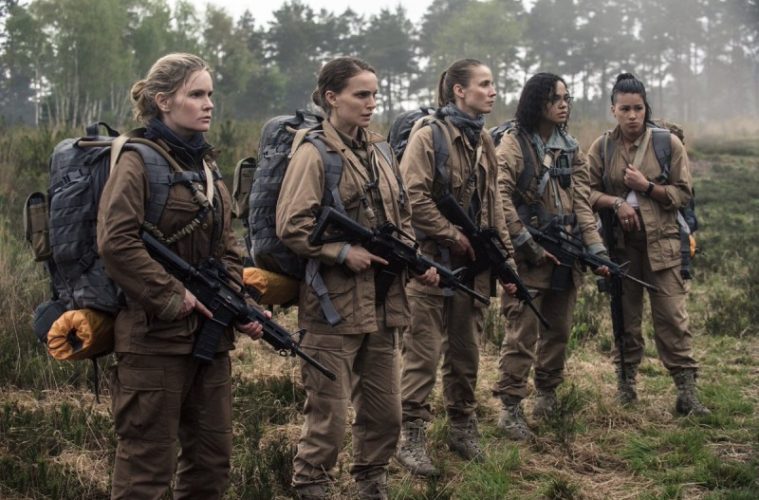 15 Films to See in February

As Oscar hopefuls continue their awards campaigns through the voting period, our sights are mostly turned to what 2018 has to offer. February is another promising month, including the final film from a late master, a trio of ambitious sci-fi features, bold character studies, and more. There’s also the kick-off of Ingmar Bergman centennial retrospective, so make sure to seek it out if it’s coming to a town near you.

Synopsis: Hannah is the intimate portrait of a woman’s loss of identity as she teeters between denial and reality.

Why You Should See It: Getting a run on the fall festival circuit last year and now arriving in theaters, Daniel Schindel said in his review, “Hannah is Charlotte Rampling’s face. There are barely any other actors to speak of in this film, and the camera often purposefully excises their faces from its attention, favoring its lead’s reactions to their words and motions. Therefore it is an extended journey through pain, as the eponymous character flails about to grasp meaning after the ground crumbles beneath her.”

Synopsis: When a man and woman who meet at work begin to know each other, they discover that they have the same dreams at night, and they decide to make them come true.

Why You Should See It: Winner of the Golden Bear at last year’s Berlinale, On Body and Soul will sadly be heading straight to Netflix, but at least that means a wider audience will be able to see it initially. Zhuo-Ning Su said in our review from the festival, “It’s one thing to give your movie a title as sweepingly ambitious as On Body and Soul, but quite another to deliver something equally transcendent.”

Synopsis: An estranged Russian couple going through a brutal divorce both have new partners and want to start over until their 12-year-old son disappears after witnessing one of their fights.

Why You Should See It: Naming it one of the best films of 2017, Ed Frankl said, “Filmed with icy precision in cold, anonymous Moscow, with some of the year’s best cinematography – by Zvyagintsev regular Mikhail Krichman – the film is upfront, provocative and, in its bitterly satirical testimony of the decay of Russian cultural life, according to some critics blunt. But it’s in that vein that Zvyagintsev so powerfully confronts the domestic terror of the central missing-child drama. Really, Loveless is the great horror film of the year.”

Synopsis: Chloé, a fragile young woman, falls in love with her psychoanalyst but soon discovers that her lover is concealing a part of his identity.

Why You Should See It: If you’re into B-movie psychosexual thrillers, François Ozon delivered such one at Cannes last year. Rory O’Connor said in our review, “L’amant double is the sort of film you wouldn’t mind seeing Roman Polanski take a stab at. Shot in chic but soulless Parisian interiors, it’s the type of thing that controversial figure tends to relish: all claustrophobia, body horror and pseudo Freudian sexual nightmares.”

Synopsis: When director Travis Wilkerson tries to investigate the 1946 murder of an African-American man by his white supremacist grandfather, he meets great resistance, and people threaten to take his life.

Why You Should See It: Earning acclaim since debuting his project at Sundance last year, Travis Wilkerson gets personal in his latest documentary. Did You Wonder Who Fired the Gun? explores the story of his white-supremacist great-grandfather, S.E. Branch, who murdered an African-American man in his small town of Dothan, Alabama in 1946. Playing as both an investigation of this (uncharged) crime and a look into his own family, it looks to be an unfortunately essential documentary.

Synopsis: Set at the dawn of time, when prehistoric creatures and woolly mammoths roamed the earth, Early Man tells the story of Dug, along with sidekick Hognob as they unite his tribe against a mighty enemy Lord Nooth and his Bronze Age City to save their home.

Why You Should See It: In the early months of the year, we’ll be treated with a pair of highly-promising stop-motion animations. Before Wes Anderson’s Isle of Dogs arrives in March, Nick Park and Aardman Animations will head back to the prehistoric era in Early Man. It’ll be hard for the company to top the Shaun the Sheep movie, but we are hoping for the best, and Aardman usually delivers in spades.

Synopsis: In a Berlin of the future, a mute bartender’s search for his missing lady-love takes him deeper and deeper into the city’s criminal underbelly.

Why You Should See It: Perhaps pushed back slightly to ride the wave of Denis Villeneuve’s sci-fi sequel, Duncan Jones’ long-gestating Blade Runner-inspired sci-fi feature Mute will finally be arriving soon Netflix. After entering the world of large-scale tentpole fantasy with Warcraft, the story finds him working on a smaller scope. Starring Alexander Skarsgård, Paul Rudd, and Justin Theroux, hopefully it’s a return to form for the director of Moon and Source Code.

Synopsis: Three Americans discover a terrorist plot aboard a train while in France.

Why You Should See It: Completing his unofficial trilogy of American heroism after Sully and American Sniper, Clint Eastwood’s latest film recreates the 2015 event in which Anthony Sadler, Alek Skarlatos, Spencer Stone, and Jeffrey E. Stern were on a train from Brussels to Paris when an ISIS terrorist boarded with an AK-47, a pistol, a box cutter, and enough ammunition to kill all 500 people on board. The three American friends took it upon themselves to charge the gunman and stop him. Eastwood’s film actually stars the three men, playing themselves, which has us highly intrigued, for better or worse.

Why You Should See It: When it comes to the U.S. distribution of Kiyoshi Kurosawa films, we often learn about their arrival just before they debut. Following the VOD-only release of Daguerrotype last fall, this is certainly the case for his sci-fi invasion feature Before We Vanish.  Rory O’Connor said in our review, “The prolific Japanese filmmaker behind such varied genre gems as Pulse and Tokyo Sonata has constructed a sort of skittish and overlong, albeit pleasantly existential oddity in Before We Vanish, an alien-invasion B-movie packed with A-grade ideas and craft. Nail down your windows. Lock your doors. It’s the invasion of the concept snatchers.”

Synopsis: T’Challa, after the death of his father, the King of Wakanda, returns home to the isolated, technologically advanced African nation to succeed to the throne and take his rightful place as king.

Why You Should See It: The Marvel cycle is underway like clockwork: months of hype, then an initial fanboy-only junket screening followed by a rapturous response. This time around hopefully the next step in the process isn’t the same: going to see it opening weekend and feeling various levels of disappointment at how ephemeral the experience was. With a talented, up-and-coming director at the helm, Ryan Coogler, and an epic cast of Chadwick Boseman, Michael B. Jordan, Lupita Nyong’o, Daniel Kaluuya, Angela Bassett, Forest Whitaker, and more, we’ll find out if this truly stands away from the Marvel pack soon.

Synopsis: After premiering nearly a year ago at Berlinale, following an Oscar nomination, Sebastián Lelio’s trans drama A Fantastic Woman will finally be landing in theaters.

Why You Should See It: There most be something in the water in Chile, at least when it pertains to the prolific nature of its emerging directors. Following Pablo Larraín’s one-two-three punch of The Club, Neruda, and Jackie last year, Sebastián Lelio’s has two high-profile films arriving this year. Along with his lesbian drama Disobedience starring Rachel McAdams and Rachel Weisz, his Berlinale success A Fantastic Woman arrives this week. “Timely issues of transgender rights both in Latin and North America help make A Fantastic Woman a bolder, brasher film, fiery in comparison with Gloria’s relatively tenderness, but anchored once more by a stellar central performance by trans actress Daniela Vega,” we said in our review.

Synopsis: An Australian woman upsets the precarious balance that holds two families together in Brooklyn, N.Y.

Why You Should See It: Over a year since it debuted at Sundance Film Festival, Alex Ross Perry’s ensemble feature Golden Exits will finally arrive this month. I said in my review, “Avoiding the tropes of virtually every other film of this ilk, there is no poignant breakthrough of self-realization nor a climactic scene where the characters become aware of the connection between these relationships and a clash occurs. This relatively subdued approach can initially register as narratively insubstantial, but considering how intricately Perry carves out the understated instincts of each of these characters, it’s easily his most humane and emotionally complex film.”

Synopsis: When some German construction workers begin a challenging new job in the Bulgarian countryside, their sense of adventure is awakened, but so, too, are their prejudices.

Why You Should See It: One of the best character studies I’ve seen in a great while, Valeska Grisebach’s long-awaited return was one of our favorite films of Cannes last year. “Of course, Western implies a cinematic reference—a genre, in and of itself,” Jake Howell said in his review. “A genre, to be clear, with tropes galore that are just as problematic as the industry that propagates them. In titling her film as such, however, Valeska Grisebach’s contemplative, brilliant film sparks a dialogue on all of these components, prompting us to think critically on their intersections.”

Synopsis: A biologist signs up for a dangerous, secret expedition where the laws of nature don’t apply.

Why You Should See It: Alex Garland proved to be a dynamic director with his sci-fi chamber piece Ex Machina, and now he’s back with the hopefully more visually daring Annihilation. With promising reports that his adaption of Jeff VanderMeer’s novel is strange enough that it turned off test screening audiences-so much so that Paramount execs were worried and cut an international deal with Netflix-it’s all we need to know to be truly excited at the prospects here. Starring Natalie Portman, Jennifer Jason Leigh, Gina Rodriguez, Tessa Thompson, Tuva Novotny, and Oscar Isaac., this Stalker-inspired journey will hopefully be a bold entry in the genre.

Synopsis: An experimental project made by filmmaker Abbas Kiarostami in the last three years of his life. It is a collection of 24 short four-and-a-half minutes films inspired by still images, including paintings and photographs.

Why You Should See It: No other film comes close to being our most-anticipated this month. Nearly two years ago one of the greatest directors cinema has known, Abbas Kiarostami, passed away. Now his final film, the experimental 24 Frames, will finally be arriving in theaters courtesy of Janus Films, who will most certainly release it on The Criterion Collection. So, if you don’t live in NYC or a city it’s expanding to, stay tuned for more details.