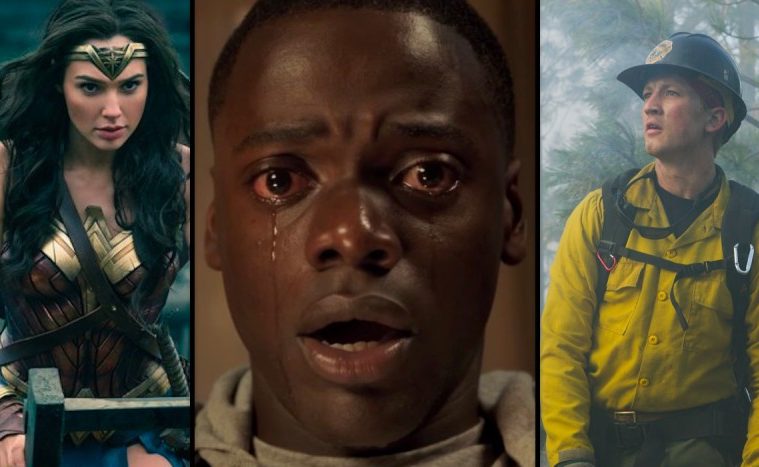 10 Wide Releases in 2017 That Exceeded Expectations

While wide releases like Star Wars: The Last Jedi, Dunkirk, Baby Driver, John Wick: Chapter 2, and Logan Lucky either met or fulfilled expectations this year, we had to dig deep for the studio films that caught us pleasantly off-guard. While much of our year-end coverage will be focusing on the overlooked gems, today we’re highlighting the few major releases that left us surprised.

Note that the below ten features are strictly films that received a wide release on their opening weekend and not ones that eventually expanded with a roll-out. Some, for various reasons, arrived with virtually little-to-no anticipation around these parts, while others wildly exceeded our standard expectations, and a few managed to be among our favorites of the year.

Check out our selections below and let us know what surprised you most in 2017.

It is hard to say where exactly expectations were for this movie at the outset. On the one hand, decades-later sequels to classic films have never been a solid bet in terms of quality. On the other, the talent lined up to bring this film to life was staggering. Denis Villeneuve has a nearly unblemished track record for creating smart, tense movies on a large scale, and his work with Roger Deakins has been unimpeachable. But even with a strong cast—including a returning Harrison Ford—nothing was certain walking into this film. Luckily, Blade Runner 2049 turned out to be one of the smartest, most visually stunning films of the year. Not only that, but with a story that focuses on the exploitation of an underclass primarily personified by women, the film turned out to be extremely timely as well. – Brian R.

Jordan Peele—who was best known for his work on the sketch comedy show Key and Peele—made waves when it was announced that he was moving into the world of feature films, and those waves only got bigger when it turned out that his first film would be a horror film. Expectations for Get Out were high, especially after its first incendiary trailer, and yet somehow the film managed to surpass them. Between the strong performances of Daniel Kaluuya, Allison Williams, and LilRey Howery and the enviable direction from Peele, the film runs like a well-oiled machine from start to finish. That’s even before you get into the fact that the film is one of the most adroit pieces of social commentary to have been crafted in recent years regarding racism in America, especially in those places where people assume racism has been “solved.” Between the clockwork plotting, heady ideas, and brilliant execution, Get Out was one of the few films this year begin with high expectations and clear them with space to spare. – Brian R.

This raucous tale of black female friendship is like The Odyssey, but with absinthe-fueled dance-offs and grapefruit blowjobs — call it The Flossiad. Tracy Oliver and Kenya Barris’ manic but heartfelt script goes from smart to brilliant through a quartet of god-level comic actors.Tiffany Haddish has (deservedly) gained the lion’s share of popular attention for her breakout role as party animal Dina, but all of the leads rank among the best performances of the year. In particular, Jada Pinkett Smith (never in enough things) shines as the beautifully awkward and desperately needing a lay Lisa. Even the industry’s typical underestimation of the strength of black and female stories couldn’t stop the funniest movie of the year from triumphing with critics and at the box office. – Dan S.

With a more ceremonious unveiling than the other Hollywood adaptation of a Stephen King property this year, It is slickly calibrated to please its spook-hungry audience. Functioning more as a roller coaster ride of frights and humor than a dread-inducing exercise in terror, Andy Muschietti’s Mama follow-up doesn’t have the inspired vision or thematic complexity to join Brian De Palma and Stanley Kubrick in the pantheon of the (very few) masterful cinematic retellings of the celebrated author. However, for a Halloween precursor, there is a respectable amount of carnivalesque mischief to be found in this cinematic equivalent of a deranged jack-in-the-box. Read my full review. – Jordan R.

“Whatever Disney would do, do the exact opposite.” It’s unlikely that James Mangold and crew took this as a conscious creed in the production of western/thriller/sci-fi superhero adaptation Logan, but they might as well have done so. Lean, gruesome, bleak, tragic, and possessing an air of morbid finality — supposedly Hugh Jackman and Patrick Stewart’s final performances as beloved superheroes Wolverine and Professor Charles Xavier after 17 years — the decisively R-rated film is antithetical in nearly every single aesthetic choice to the tangled, homogeneous mass of blockbuster Marvel Comics adaptations with which Disney has saturated the market. Even more antithetical, and more significant: the film is clearly the work Mangold and company wanted to make, and Fox — perhaps eager to prove a point before the House of Mouse as they struggle to retain their few remaining Marvel licenses — gave them seemingly unreserved freedom to do so. Using the conventions of the superhero genre and the established continuity of prior films as creative springboards rather than ends unto themselves, the film dares to tell a self-contained, character-driven story with a beginning, middle and end; one that, for better or worse, borrows as much from the elegiac postmodern western as Marvel’s heroic pulp fantasy. – Eli F.

No one was sure what to make of mother! upon its announcement. Was it a riff on Rosemary’s Baby? Was it going to be another Black Swan? Writer/director Darren Aronofsky was fairly tight-lipped about the film before its premiere (though he couldn’t shut up about it afterward) and thus the film had an air of mystery about it. Presuming that it would just be a spooky/scary little thriller, imagine our surprised when mother! turned out to be one of the most divisive, audacious, and layered films in recent memory. With a crushing central performance by Jennifer Lawrence and some of the tightest filmmaking craft of Aronofsky’s career, mother! turned out to be a flashpoint in the culture, one of the most talked-about films of the year. It was a gift for those of us who love to chew a movie over, who thrive off of subtext and symbolism, and even became the pivot around which a meta-conversation about from where the meaning of art derives. In addition to all of that, though, it was also just a damn good film. – Brian R.

Only the Brave (Joseph Kosinski)

The victim of being one of two Miles Teller-fronted pictures opening back-to-back with titles that could have very easily been swapped with each other (the other, Thank You For Your Service, was a profound, if cliched military drama), Only The Brave is an emotionally-charged action thriller based on the true story of the Granite Mountain Hotshots, a crew of elite fire fighters hailing from rural Arizona. The drama and action of the third act is intensified by investments in character development made by director Joseph Kosinski and writers Ken Nolan and Eric Warren Singer. They give the film’s first-rate cast, including Josh Brolin, Jeff Bridges, Taylor Kitsch and Jennifer Connelly, room to build three-dimensional characters and a town we care deeply about as they enter the inferno. Rarely are action films this spiritual and this grounded. It’s a shame Only The Brave — and for that matter, Thank You For Your Service — didn’t find much of an audience when they opened in the fall. Both are commendable dramas celebrating real-life heroes. – John F.

While Robinson’s film does fall into the usual trappings of biopic beats, its subject can’t help but transcend them. She shines a light onto the identity struggles so many face today and presents an unconventional life as healthy and, dare I say, normal. Her script allows profanity to fly free not as a means of provocation, but of uncensored intelligence. It showcases sex in a female gaze both with a man and a woman, letting the truth of who the Marstons were exist above polygamy stereotypes or assumed abuse. Very often it is Elizabeth or Olive who wields control—William beholden to their desires and allowance as far as following their hearts rather than fears. As he says early on, together they are the perfect woman. Diana is an amalgam of both. Read my full review. – Jared M.

From the moment we learned Bruce Willis was dead the whole time, M. Night Shyamalan’s reputation has stood in a way — a large, ungainly, resistant-to-nuance way — that permanently precedes him. Expectations for a new film remain low, so it would take little for Split to end up here; yet this particular film is conceived, plotted, photographed, and, performed (by newcomer Anya Taylor-Joy and the never-better James McAvoy) with such aplomb, such joy for moviemaking itself, that it’s better-suited for a best-of-the-year list. Its final scene is remarkably dumb, but in a way that’s sort of endearing — not to mention surprising, if only because none of us thought Shyamalan would have the gusto to make such a gesture. Seeing it all come full-circle in just over a year’s time? Perhaps we’ll have no need for expectations to be exceeded. – Nick N.

On the heels of the morose and bloated one-two dud of Man of Steel and Batman v. Superman: Your Mom’s Martha Too?, Patty Jenkins’ Wonder Woman faced a typical bullshit task shirked on a woman: Take a terrible situation and be expected to deal with it. While it still falls victim to some of the VFX laden sameness that bogs down most of its superhero counterparts, the film propels itself on the immense affability of its leads. Gal Gadot is aces as the Amazonian warrior, as Chris Pine gamely slips into the role of servile romantic lead – the pair of them leaving one hard-pressed not feel at least a little swoon inside. Couple that with the dark timeline of the current political climate, it’s comforting to know we can still have nice, big entertainment, even if we don’t deserve it. – Conor O.

Honorable mentions: A pair of other superhero films showed the genre might still have some life in it with Spider-Man: Homecoming and Thor: Ragnorak. Meanwhile, Jumanji: Welcome to the Jungle is far from great, but as far as unnecessary sequels go, it’s about as strong as can be. There was also a pair of deliciously nasty sci-fi thrillers that nearly made the cut, Life and Alien: Covenant. There was also two visually ambitious films that didn’t quite exceed our expectations, but deserve a watch: A Cure for Wellness and Valerian. As for one of the most-praised blockbusters of the year, War for the Planet of the Apes, well, you can read our review.

Which wide release surprised you most this year?