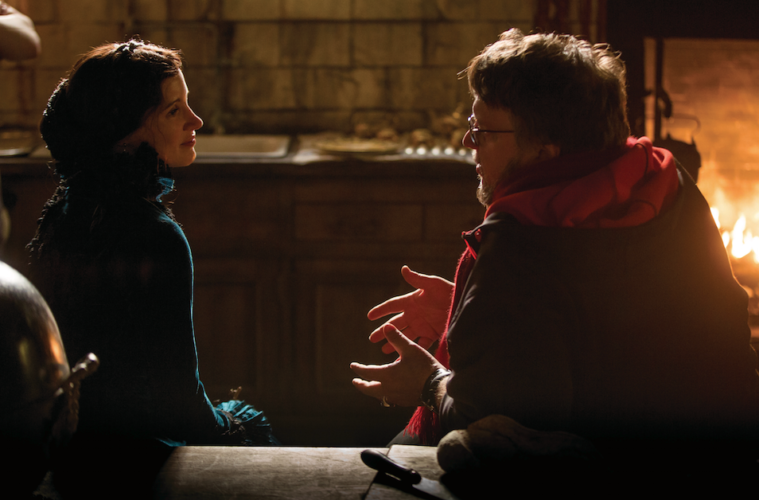 Regardless of the budget at his disposal, Guillermo del Toro always incorporates a wide range of influences in his films — just look at Pan’s Labyrinth, or take a quick peek at a recently launched Twitter account that puts other directors’ use of the platform to shame — and it’s no different with his forthcoming Crimson Peak.

We said in our review, “Crimson Peak works as many things: a melodramatic romance; both the recreation of a period and a revival of the way movies have made us perceive it; a genre-jumping comedy; and a critique of capitalistic excess. It does these things earnestly and without compromise, and it’s far braver — far more admirable — for having done so. What Guillermo del Toro’s new film doesn’t work as: a haunted-house picture.”

So if you’re seeking something to fill the horror void or want a few options that are similar in tone to his latest picture, look no further. We’ve gathered ten recommendations, ranging from a few of his own features to haunted-house classics to period romantic dramas and beyond. Check out our list below and let us know what you’d recommend in the comments.

Rather than a haunted house, Black Narcissus‘ place of tormented isolation is found on a remote Himalayan mountain where a group of well-meaning nuns get slowly seduced by desires. As the hysteria bubbles due to psychological repression — not unlike Wasikowska’s character in Crimson Peak — Powell and Pressburger craft a beguiling yarn of moral battles. One of their most singularly untamed films, it also ranks among their best. See it also for the attention it brought to Deborah Kerr, who’ll be mentioned later on in this list.

We’d be remiss to forget Guillermo del Toro‘s two best films, each of which carry a few similarities to his latest. “I go very counter to the culture of ghost stories. I just want the ghosts to be, and then make it a creepy movie, rather than one based on scares. Make it an atmospheric movie, which is creepy, yes, but the more you attend to the story the more you’re hopefully invested in the human characters – good or evil – and the more the ghosts become a palpable threat,” he tells IGN. “I think I did it in Devil’s Backbone, which is still one of my favorite movies I’ve done, and I hope we’ve pulled off something similar here. It’s a very different movie, but it’s similar in certain ways.” Indeed, Crimson Peak harkens back to his bolder Spanish-language filmmaking days of putting emotion above scares, albeit with a much bigger budget this time around.

“To me [the classic old haunted-house movie] is Robert Wise’s The Haunting, which was a big movie, beautifully directed, with the house built magnificently,” del Toro said before he even shot his latest feature. In both The Haunting and Crimson Peak, the similarities go beyond just an immaculate production design; it’s also that his characters have (or form) a perverse attraction to the soul of their respective antique residences. Both titles — though to a much greater extent in Wise’s picture — show that the right dose of unsettling architecture and horrifying Feng Shui can seep into one’s consciousness and have fatal consequences.

While set-ups similar to Crimson Peak‘s can be found in The Ghost and Mrs. Muir, The Old Dark House, and The Uninvited, we can’t think of one more analogous, design-wise, than Jack Clayton‘s wonderfully eerie The Innocents. In what could be a perfect prequel to Guillermo del Toro‘s latest film — he even calls it a prime influence — the story follows a pair of too-perfect, ultimately tormented children (see: younger versions of Chastain and Hiddleston’s Crimson Peak characters) as they wreak slowly percolating havoc on their new caretaker, Deborah Kerr‘s Miss Giddens. From the Victorian candle holders to the wide staircases with pronounced bannisters, it could also have more or less the same set as the back half of del Toro’s new feature.

Although Crimson Peak is being billed as perfect Halloween-viewing material, its romantic leanings actually have much more in common with a Charlotte Brontë classic. It’s been adapted over a dozen times for the screen, but thanks to the Mia Wasikowska link (and stellar direction from Cary Fukunaga), we’ll offer up the most recent take as a recommendation. “We talked about Rochester in Jane Eyre,” Tom Hiddleston says, confirming the connection, “We talked about Bluebeard, and this thought of a Byronic hero. There were archetypes we indispensable to present, to emanate expectations that we could mishandle and confound. Guillermo and we were always perplexing to find a refinement and a pointing of that unequivocally formidable psychology. He’s unequivocally trapped, struggling to giveaway himself from a holds of a past.”

It might not be riding the same gothic wavelength as Crimson Peak, but if there’s a chance to recommend Jim Jarmusch‘s vampire hangout masterpiece Only Lovers Left Alive, we will not pass up the opportunity. Also starring Tom Hiddleston and Mia Wasikowska the film exudes a sense of off-beat cool in every scene, emanating an aura that’s not unlike a great record just spinning away. There’s a delectable, blood-filled atmosphere in both films, and those looking to unwind after del Toro’s latest have a perfect follow-up.

A protagonist returns to a dilapidated estate in which secrets are buried and, upon uncovering them, sees all hell break loose. If that sounds familiar, good: this horror feature almost acts like a test run for Crimson Peak — at least with Guillermo del Toro being its producer. The directorial debut of Juan Antonio Bayona — who would go on to helm the international hit The Impossible — has imagery that will burrow much deeper under your skin, all while still bearing that distinct del Toro touch.

The souls of the dead driving one to madness is a common theme in both del Toro’s latest and Alfred Hitchcock‘s American debut, Rebecca. With the latter coming from Daphne du Maurier‘s novel, del Toro has said he really “wanted to create a really classical lush lavish gothic romance,” specifically in the vein of the 1940 Laurence Olivier and Joan Fontaine classic. “It hasn’t been done in a while, there are always female-centric movies that have very strong protagonists… Many times in some of these movies the girl ends up a damsel in distress. I wanted to create a tale that’s a classical straight gothic romance but certain twists are a little more gender liberated, a little more about being yourself. I’m conscious about this with two daughters, we live in a world with a secret gender war, as storytellers it’s our duty to take these great genres and retell them.”

Naming The Shining the “Mount Everest of the haunted-house movie,” del Toro says, “I loved the way that Kubrick had such control over the big sets he used, and how much big production value there was. I think people are getting used to horror subjects done as found footage or B-value budgets. I wanted this to feel like a throwback.” While Crimson Peak may not pack the same careful detail of geographical coherence that Kubrick’s fantastically fun Jack Nicholson-led horror does, its visual similarities cannot be denied.

What films would recommend watching beforehand?