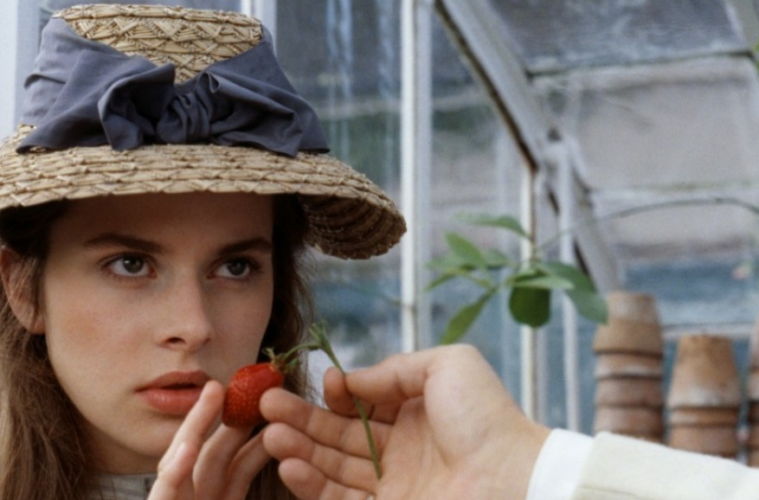 One of Roman Polanski’s great abilities as a director is to turn tight spaces into adventurous cinema — to evoke a feeling of claustrophobia without making films that seem static or stagy. Sam Adams, in a recent A.V. Club “Watch This” recommendation for Polanski’s 1994 Death and the Maiden, presented this very idea: “Give each director a room and see what they can do with it. Nothing shows off a filmmaker’s ability (or inability) to transform space better than when they don’t have much of it to work with.” Though Polanski’s early work (Knife in the Water, Repulsion, Rosemary’s Baby) is especially indicative of this drive to pair restricted locations with exciting formal exertion, it’s telling that Polanski’s two most recent feature-length films — Carnage and Venus in Fur — are both adaptations of plays. Polanski hasn’t stopped looking for material in confined spaces, because that’s where he feels comfortable operating, and that’s where many of his pet themes can be articulated with the most force.

1974’s Chinatown marks a slight progression of this working register: the film still affirms Polanski’s fascination with corrupt social orders, imposing male figures, and victimized women, but it renders those concepts on a mesmerizing widescreen canvas of barren Los Angeles fields. Chinatown proved that Polanski could duplicate his signature claustrophobia even when working with deserted exteriors that stretch for miles and miles into the horizon. 1979’s Tess is arguably even more surprising in its approach: whereas Chinatown finds Polanski preserving his themes and impressions in a 130-minute noir with intricate Robert Towne plotting and charismatic performances, Tess — a 171-minute adaptation of Thomas Hardy’s 1891 novel, Tess of the d’Urbervilles — preserves those same Polanski-specific sensations in a studied, painterly environment that’s very much in the David Lean mold. (A brief note on the film’s painterly credentials: this Senses of Cinema piece by Arthur Rankin identifies Sir John Everett Millais, Jean-François Millet, and Jean-Baptiste-Camille Corot as important influences on the cinematography of Tess.)

In addition to Lean, the pageant-like opening sequence of Tess — with its musical momentum, its long-shot distance from the action, its magic-hour lighting, and its procession of girlish dancers in white gowns — resembles the detailed, organic grandeur of Francis Ford Coppola’s Godfather films, Terrence Malick’s Days of Heaven, and Michael Cimino’s Heaven’s Gate. Though this style, so different from Polanski’s other films, is immediately pleasurable on a surface level, it’s soon contrasted by the introduction of the dastardly plot that will set the story’s heroine on a path of destruction. When Parson Tringham (Tony Church) informs the peasant patriarch (John Collin) of the Durbeyfield family that he and his kin are, in fact, descendants of the eminent D’Urberville clan, the fetching young Tess (Nastassja Kinski) is sent on a journey to “claim kin” from a wealthy relative, Alec d’Urberville (Leigh Lawson). Alec agrees to help Tess, but for all the wrong reasons: he’s not even an actual D’Urberville (his family simply purchased the name), and his only interest in lending support to Tess’s family comes from his unrequited attraction to Tess.

Alec offers Tess a job managing poultry on his estate, and their subsequent proximity leads to the story’s infamous rape scene. Shockingly, Polanski cuts from the rape to an image of Tess opening a gift from Alec — a gesture that’s not so much overly sadistic as it is faithfully representative of a society in which an upstanding man like Alec doesn’t have to think twice about forcing himself on a woman and then showering her with presents. Alec’s heartlessness is further conveyed in a series of sustained-take carriage scenes between himself and Tess that are alarmingly visceral: Patrick Fahy, in the May 2013 issue of Sight & Sound, accurately describes these interactions as ones “where you fear for the actors’ safety.” Lawson is queasily effective in the role of Alec, imbuing the character with a James Mason-like veneer of respectability, and one of the story’s cruelest realizations is that he might not even be the most despicable male character in the film.

Tess’s other suitor, golden-boy Angel Clare (Peter Firth), makes a good argument for that title, even though Tess clearly loves him in a way that she’ll never love Alec. Angel’s circumstances position him as an ideal partner for Tess: he comes from a prosperous background, though he’s rejected the family path of his religious parents, so there’s no potential societal shame to stop him from marrying a lower-class girl. (In an ingenious class subversion, Tess actually worries that Angel, having discarded his well-off family roots, might not want to marry her once he learns that she’s descended from the famed D’Urbervilles.) In the end, though, what vilifies Angel is his hypocrisy. On the night of their wedding, he confesses a former tryst to Tess, hoping that her forgiveness will provide the final foundational piece to their relationship. She does forgive him, and he’s ecstatic, but then Tess reveals her own tumultuous history: her rape at the hands of Alec, her illegitimate pregnancy, and the later death of that child. After hearing this, Alec severs their relationship, and in doing so solidifies the story’s despairing theme. Colin McCabe, in his essay provided with the Criterion Collection’s new release of Tess, words it as follows: “The story of Tess Durbeyfield is the story of a young woman who is destroyed by the double standard of Victorian life that required virginity in a woman as a condition of marriage but permitted a man his visits to the brothel.”

Though Tess won three Oscars (Best Cinematography, Best Art Direction-Set Decoration, Best Costume Design) and had its share of significant critical supporters, it was no stranger to controversy. As the first film Polanski made after fleeing the United States to avoid serving time for statutory-rape charges, the narrative draws obvious and provocative parallels to Polanski’s real-life situation at the time. (There’s also the additional piece of information that he engaged in a relationship with Kinski in the mid-‘70s.) Moreover, as an adaptation of such a famous literary work, the film was always going to court criticism from people deeming it inferior to the Hardy novel. In February 1981, The New Yorker’s Pauline Kael wrote: “Polanski treats the novel with the utmost fidelity and respect (much of the dialogue is verbatim), the movie is authentically detailed — and there is virtually nothing of Hardy in it.” Kael also called out the characterization of Kinski’s Tess as “strictly a victim of men and social conventions.” This latter point was picked up by Charles L. Fierz in a biting 1999 critique published in Literature/Film Quarterly: “Not only is Polanski’s characterization of Tess too weak for an adequate representation of female personhood, but his inadequacy is exacerbated because he, unlike Hardy, is not a Victorian, but is a male living in the modern world and should know better.”

Despite such detractors, the current sense in the air, bolstered by the handsomeness of Criterion’s treatment of the film, is that the critical status of Tess is improving with each passing year. (Andrew Sarris, in the May/June 2010 Film Comment: “Polanski made the guilt-ridden agonies of Tess his own to such an extent that the film remains a sublime emotional highlight of his career — second only to the epiphany of Chinatown [74], the greatest of all Hollywood political film noirs.”) Part of this can be attributed to the film’s biographical substance for Polanski, whose legal history was made all the more accessible by Marina Zenovich’s recent 2008 documentary, Roman Polanski: Wanted and Desired. At a certain point, the movie’s place within Polanski’s real-life timeline — its status as the first film he made after fleeing the U.S., its “to Sharon” dedication, in reference to his second wife, Sharon Tate, who recommended Hardy’s book to Polanski before her horrific death at the hands of the Manson Family in 1969 — is simply undeniable in its importance.

Even more substantially, Tess carries a remarkable amount of interest from an auteurist perspective: Kinski’s internalized performance communicates the same female helplessness and anxiety that plagues Catherine Deneuve in Repulsion, while the cinematography of Geoffrey Unsworth (who died during production) and Ghislain Cloquet transports Polanski’s bitter worldview from John A. Alonzo’s dry Chinatown vistas to the realm of the plush, prestigious literary adaptation, finding the claustrophobic in the epic. However, as is to be expected with a director as cynical as Polanski, the function of his technique is anything but period-piece pleasant: the hissing machinery that surrounds Tess turns the film’s soundtrack into a shrill nightmare; the climactic murder, so hauntingly envisioned by the director, is as bone-chilling as anything in Rosemary’s Baby; and the rack-focus that follows Tess’s confession to Angel represents an amazingly economical encapsulation of the theme of Tess. The girl pours out her life story, puts her faith in the hands of another person, a person who’s supposed to be her true love, and all she gets is her face shoved out-of-focus, forever obscured.

Tess is now available for purchase through the Criterion Collection.