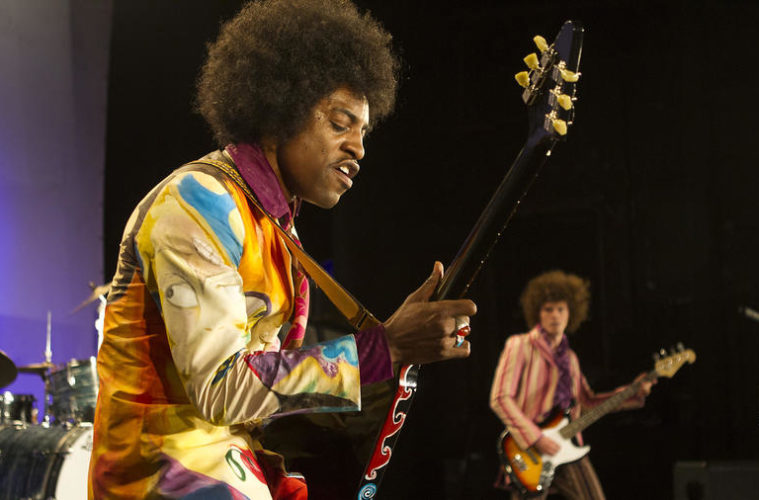 After all the talk from last year’s TIFF centered around the eventually Oscar-winning Best Picture 12 Years a Slave, you can’t blame yourself if you forgot Oscar-winning screenwriter John Ridley brought another film he both wrote and directed. Jimi: All Is By My Side flew under the radar and was mired by a media blitz intent on focusing around the fact it didn’t acquire the rights to any of its titular subject Jimi Hendrix‘s music. What it did have, however, was a uniquely arresting visual and aural style that looked to give us more than a run-of-the-mill look at an icon we all think we know.

Ridley’s latest work is finally hitting theatres a year and a few weeks later on September 26th. Its release comes after the accolades surrounding 12 Years died down, after an active campaign against the film by one of its real life subjects Kathy Etchingham, and a title change adding the aforementioned “Jimi” to help with audience recognition.

I was a fan of the film then, as my review attests to, and an even bigger fan of Ridley now after having the pleasure of talking to him about it. A gracious and modest interviewee, his enthusiasm to speak about the film never wavered despite being on the tail end of a daylong media blitz. He spent years researching this story to get it together with an independent budget and the end result proves successful at demystifying an artist few cared about until after the Monterey Pop performance that ends this film put him on rock and roll’s map. The Film Stage: What drew you to this pre-fame Hendrix? Was it the challenge of putting this icon onscreen as a human being removed from the legendary fame?

John Ridley: Well, I think that was certainly part of it—the idea of demystifying the individual and showing him as person rather than a Rock and Roll God.

People ask me about him and sometimes I say—to me it’s kind of like Che Guevara. Kids walk around with Che t-shirts on but they don’t necessarily know much about him or his politics or his era. Was he a good guy or a bad guy? There is a level of—with any famous person—who are they really? To take it out of the aspects of the individual that we all think we know—whether it’s Monterey or Woodstock—and really see how someone became the person that we know. See the key relationships that informed him. I think that’s really kind of special.

For me I thought it was an opportunity, but also a way to tell a story that said things or expressed aspects of some of his life that a lot of people were not familiar with.

Thank you very much.

Did All is By My Side begin as a writing project or was it always something you saw yourself getting back behind the camera for?

That’s a really good question and to be honest with you, after Cold Around the Heart I can’t say that I had a great desire to direct again. And at the same time I can’t say a lot of people were racing to me to make another film.

I think part of All Is By My Side was a real evolution of process. One, more than anything, it was just finding a story that moved me. I mean really, not just finding like, “Oh, let me go get a story because I want to write one.” But over time learning things and becoming more aware of aspects of this story. Having the opportunity to talk to people and read more and research and all of that.

Then in the writing of it and presenting it and maybe pitching it to a few people—getting the sense that if this story was really going to be told in a way that I felt it deserved to be told with a certain reverence for history, for fact, for the people who were involved and certain choices in terms of the language of cinema I wanted to use, then it really was going to be incumbent upon me to actually go out and make the film happen and direct it.

I think the story gave me confidence to go and shoot another film rather than just saying, “Oh I want to go and make a movie, let me find an interesting story.” It was powerful in its own right and in that way I guess it inspired me. A lot has been made about not having any of Jimi Hendrix’s popular songs to use even though the film depicts a time when he wouldn’t necessarily be playing them. Was it a conscious choice not to use them or was it a rights issue like the media infers?

For me—individuals like Paul Greengrass and the Hughes Brothers, they’ve wanted to make Hendrix films and they haven’t been able to bridge that divide between what they wanted to do creatively and what other people might want in terms of dispensation of intellectual property. And at the same time I think we’ve all seen films where they had all the rights in the world or archival material or artifacts and the story didn’t work. It wasn’t about people; it wasn’t about connectivity. It didn’t have certain chemistry.

So for me, once I got into the story I always felt like this was something that had its own emotional velocity in order to be told a very particular way. Whether it’s this film—whether it’s any film—you can worry about the limitations that are put in front of you or you can decide to do what you’re going to do to the best of your ability.

I never felt limited because I always felt like what we had here was a story that was relevant because it was informative. If you don’t have that—in my opinion—you really don’t have much. So it was a film for me that—it was about people. It was about a certain time and a place and an era and a feeling and whether it’s a music biopic or whether it’s an action film or a science fiction movie, you can throw everything you want at the screen. If you don’t have characters and story and heart that something that people can connect to, you don’t really have much of anything.

And with achieving that time and place, how helpful was shooting on location in Dublin to get that European feel? Especially with so many recognizable names along the periphery from Chas Chandler to Eric Clapton recreating 1966 London?

Well it was very helpful in two regards. One, just in terms of the architecture in Dublin and having a lot of that Georgian architecture that was very prevalent in that time in England—it was very, very helpful. Then two, because obviously they’re fairly close to each other, getting a lot of the key people both in front of the camera and behind the camera who were from that area and some from that era who had a real connection—that was instantly helpful.

Certainly you can shoot films almost anywhere in the world these days, but I think for a story that really is about London, the closer you can get to that space, it’s—

I’ll tell you very briefly: one of the things that was very fundamental for me was I knew, for example, about the Michael X scene happening in real life. Obviously I wasn’t there and didn’t know what all of the conversations were about, but having moved over to London to start to talk to people and learn more about the Windrush and about the racial tensions in London—how they were different than how they were in America—that really helped to inform the scene. I think had I shot it over here or elsewhere where I didn’t have the opportunity necessarily to really spend time with people, go to Notting Hill and talk to people of color there to really research that scene, I think it would have made a difference.

So in a film like this, certainly people are focused on things like music—as they should be—but there were other aspects like that about racial attitudes that I was also able to research and steep myself in and spend time around that really, I think, helped differentiate this film from just being a rock and roll biopic. Before its 2013 TIFF screening you thanked your crew with special mention towards editing and sound mixing. At first I thought it was an interesting anecdote, but watching it and seeing these sensory collages you crafted really puts you inside the music to see it as Hendrix did. What inspired this unique sound and visual design?

Two things really—well, three things depending on how you look at it.

One film that I absolutely love from years and years ago by a director who I had the great pleasure of meeting and knowing and actually working with is Francis Ford Coppola‘s The Rain People which just used all the tools of cinema: sight, sound, editing, and even locations or limitations of locations to really make a powerful and impactful film.

Then the editor Hank Corwin and the gentleman who did our sound design Glenn Freemantle—their approach to both aspects was absolutely phenomenal and so additive. But they’re two guys who really look at their craft as artistry and not just a small enhancement to what’s going on—really an element of storytelling.

So there were places where we had a great deal of editing that was very impactful and other places where we did not edit at all and let the scene run. There were places we had very intricate sound design and others where it was very fundamental. It was absolutely fantastic working with the both of them: they’re real artists. I really, really believe that what they brought to the film was absolutely remarkable. Jimi: All Is By My Side opens in limited release on Friday, September 26th.