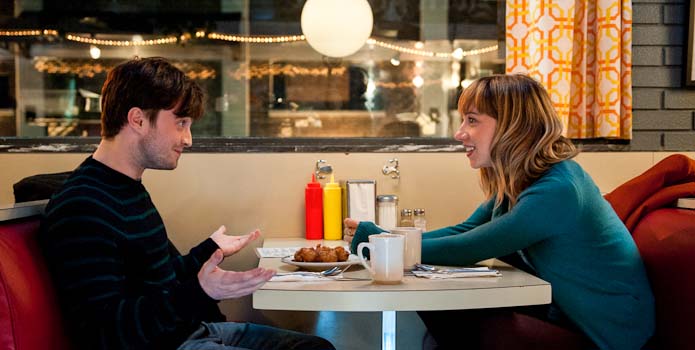 In a post-Harry Potter world it seems like Daniel Radcliffe‘s options are fairly open. He’s done horror, biopics, and now it’s time for his turn at the romantic comedy. Thankfully, What If (formerly titled The F Word) seems to be one of the most promising in the genre of the year, with the talented Michael Dowse (Goon) behind the camera.

The film follows Radcliffe and Zoe Kazan (Ruby Sparks) as friends who hope to have a successfully platonic relationship. We were fans of it out of TIFF, saying in our review, “a quaint bit of real life infused with the usual rom/com quirks. It hits every note: unrequited love, unspoken jealousies, excessive friend intervention, and the ubiquitous grand gesture to turn all the starts and stops into one glorious moment of pure bliss. It also, however, subverts that too—to a point—by admitting how creepy, selfish, and stalker-ish those types of fairy tale ideas are.”

Medical school dropout Wallace has been repeatedly burned by bad relationships. He meets Chantry, an animator who lives with her longtime boyfriend Ben, and they form an instant connection, striking up a close friendship. Still, there is no denying the chemistry between them, leading the pair to wonder, what if the love of your life is actually your best friend? What If opens on August 1st.