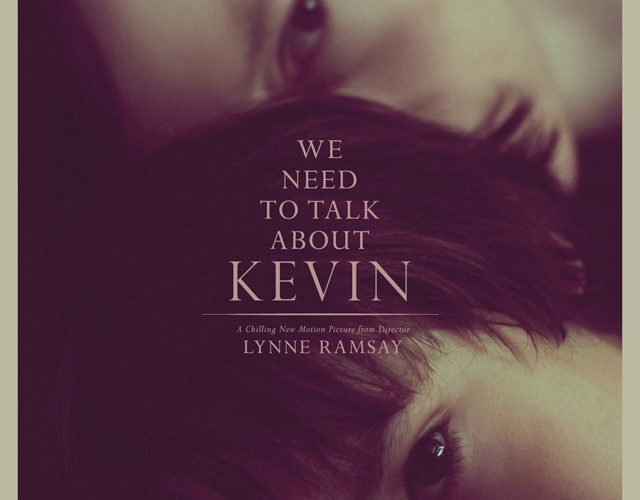 Since Spring, Lynne Ramsay’s latest effort, We Need to Talk About Kevin has been generating solid buzz for its disturbing plotline (mother copes with her teen son’s murderous rampage) and stirring performance from stalwart actress Tilda Swinton. [Read our Cannes review of the film here.] Gearing up for its release here and abroad, a swath of promotional posters has been released to intrigue audiences with a variety of treatments. From a straight forward if uninspired split character poster to a stunning yet subtle shot of Swinton, to grittier character close-ups, to a black and white treatment reminiscent of The Bad Seed (a smart allusion), We Need to Talk About Kevin’s been putting Swinton front and center in its ad campaign…until now. In the latest poster Swinton is out of focus, her face obscured by a boy (presumably Kevin) who stares dead ahead with a blank expression. It’s an image of a mother and child resting side by side, yet there’s something unsettling about the way Swinton’s gaze is averted. Then, just above her head a quote that plays up her “impeccable performance.” No doubt Oscilloscope, which will open the film in the U.S. in limited release, is beginning their push for award season, with Swinton poised to take the spotlight.

Of course Ramsay, whose earlier works include the Cannes-honored Movern Callar and the BAFTA-winning Ratcatcher, is also earning praise for this chilling tale of motherhood and mourning. At the BFI London film festival, We Need to Talk About Kevin won the honor of Best Film, beating out Steve McQueen’s performance-centered sex addiction drama Shame. Festival director John Madden had this to say, “In the end, we were simply bowled over by one film – a sublime, uncompromising tale of the torment that can stand in the place of love. We Need to Talk About Kevin is made with the singular vision that links great directors across all the traditions of cinema.” [Source: The Guardian]

Wow…Maybe that should be their next poster pull-quote.

What do you think of We Need to Talk About Kevin’s latest look? Who do you want to see compete with Swinton for Best Actress nods this award season?