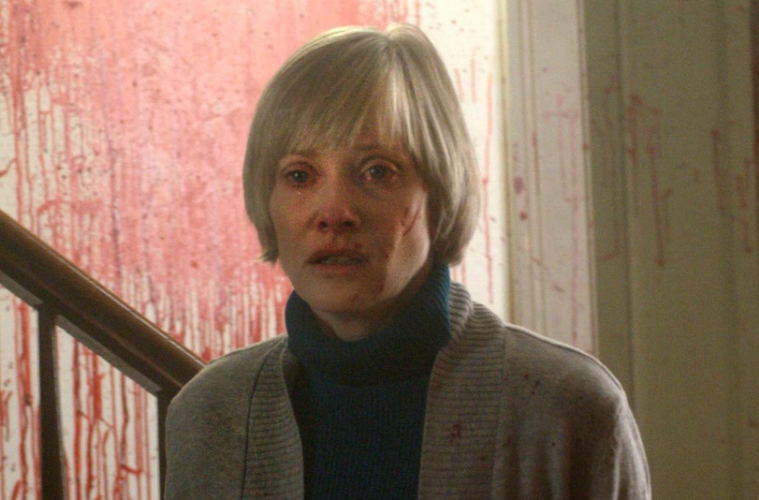 While We Are Still Here marks Ted Geoghegan‘s directorial debut, he’s been around the independent horror film industry enough to understand what does and doesn’t work. Premiering at SXSW in the Midnighters section in March, the film is now available on various VOD platforms and is a nice throwback horror feature that mixes practical effects, a simplistic storyline hook, and quality character actors peppering the scenery with charm. The film stars scream queen Barbara Crampton as Anne Sacchetti, who along with her husband Paul (Andrew Sensenig), have moved into a snow-laden sleepy town that hides a mysterious curse. Their new home continues to perplex them, whether it is the faulty furnace or the voices they hear emanating from the basement. But when locals Dave (Monte Markham) and his wife stop by for a welcoming meeting, they leave the couple with the distinct impression that something is seriously wrong. As the story plugs along, we are introduced to the Sacchetti’s friends, Jacob (Larry Fessenden) and May Lewis (Lisa Marie), who help them figure out the curse before the body count climbs higher.

The film is a charming horror experience that revels in old school gore and filmmaking, including some deviously great creature effects. There’s even a tinge of humor that comes off as knowing audience nods while the story will leave you desperate for a prequel to come about. It’s the type of film that looks way better than you’d expect and continues to draw your interest throughout. It sets out to achieve a certain mood and fun and achieves it. So it was great to sit down with the cast, including Barbara Crampton, Andrew Sensenig, Monte Markham, Larry Fessenden, and Lisa Marie to discuss the film in depth. Together we chatted about the rise of the independent horror film community, the house the film takes place around, the way weather can affect a film and the mood on set, and how independent film is alive and well today.

Midnight films are a wild venue for a film premiere and they’re always a lot of fun. But was this their first midnight movie, minus Barbara who has seen a resurgence of late. Fessenden, a veteran of the horror genre, simply laughed and mentions his back catalog and how he is usually around for a small amount of screentime before being killed off. Yet even still the question wasn’t wasted as Andrew Sensenig recalls the first few weeks on set, saying, “Barbara, you probably remember, I was quizzing you the whole first week or two of shooting. We shot for almost two weeks with just Barabara and I, then Larry and Lisa came in and the fun started to pick up. Then Monte joined us. But I didn’t know any of these people and she would be throwing out names. I’m not connected at all to this genre. I’ve done more narrative features. So she would mention someone and say that I needed to meet them and this other group of people. There is such a huge group of fans, writers, directors, actors. Some very unique looking people as well. There’s so much creativity and heart.”

Crampton added, “Well, it’s different now. There’s a whole club of people that work in the horror community and with these advances in social media everyone knows one another and we’re all working on each other’s movies. Larry is a director and producer, and he acts in other people’s movies. He had an intern for a number of years that now has a midnight movie here, Pod. When I was working on You’re Next I was acting with Amy Seimetz and Ti West was an actor in it. They’re making their own movies. So there’s a great sense of collaboration that really wasn’t evident when I was making films in the 80s. I felt like I just came in and did my job as an actress, and everybody else had their role. Now the whole community seems a lot more collaborative, to me.”

I mention that I loved the way the house is shot and that you get a real sense for the layout. It’s to the point that I think you would be able to walk into that house now and know where everything is. But was it a complete set? Was that the real basement? Crampton perks up, confirming that it was the actual basement but with a twist. “We were speaking earlier about Marcella, our wonderful production designer. She’s worked on a lot of big movies. She drove all around the countryside to collect the furniture and appropriate TVs. They really transformed it. I mean, we saw it pretty much finished when we arrived as a late 1970s home.”

“The homeowners had been in there for a little over two years and they bought it as a redo,” Sensenig added. “So they would live in a small portion of the home and then remake the rest of the home. So when Marcella came in, they just redid the entire home. Wood paneling, they even built a fake fireplace over a door or something. So everything you see in the film was brought in.” The house has a great presence and it’s Fessenden that points out the obvious when he said, “It’s on the poster!”

When I mention the basement for good measure, Crampton adds a caveat. “You know what we did use, though,” the actress asked. “I think it plays well. There’s a door in the hallway that goes down to the basement in the film, but that’s actually a closet. The basement entry is actually in the garage. But they really liked the way the hallway looked as a door to the basement. So we would open that door and look at the floor as if we were looking down the stairs into the basement. But what we were actually looking at was a dirty sock!”

As a transition I throw out a question about whether they noticed any influences on the film that Geoghegan didn’t expressly mention to them or hasn’t been telling everyone else. Maybe a hidden influence they figured out. Fessenden figured out that someone deep within the film had a special, personal connection to Geoghegan. “The thing that he doesn’t talk about is personal stuff,” Fessenden said. “What I find interesting about the movie is that I feel there is a personal touch in there. If you get to know Ted and his history there is a very sensitive guy in there and I think he was drawing on that. He’s so modest that he doesn’t really describe that aspect of his creative process but I think there’s a lot of that in there.”

What about the location and the scenery? A snow film like this isn’t made all that often. “They felt lucky to find this location and Barabara, you probably remember, the first day on set it snowed like 17 inches and we had the perfect setting,” Sensenig said. “But then, on the second to last day of shooting it had warmed up and the snow was slush and muddy. This was the day before a big scene near the end and all of a sudden, that night, it snowed 12 inches and it was perfect. It looks like a million dollar Hollywood shot using a snow machine but it was just the weather.”

Fessenden keys on this aspect, giving insight from his own career, saying, “Those are really the magical moments. It’s the weather. It’s never talked about because people are self-centered. They don’t talk about how much the natural environment affects the feeling of the shoot. I made a couple of snow movies and in one of them the snow melted half way through and the rest of the movie doesn’t have snow. Luckily it’s established early enough in the film. It’s considered a snow movie but I know the heartbreak of the last sequence being basically in mud.”

The night prior during a Q&A after the film premiered, star Monte Markham mentioned that being in this film helped him realize how much film had changed. He saw a community of collaborators that he didn’t know existed before. He seemed inspired and full of hope. So I asked him if he would be making more films.

“Oh yeah, I am,” Markham said. “I just signed on to do a film in Serbia, [The Rift], which is a science fiction horror film. I’m very curious. Michael Ironside starred in a film I made in 1991 called Neon City and we still stay in touch. He told me about how he continues to make movies with this group in Europe. It’s more community now than it ever was when I stopped in the 90s. Now it’s wide open. It’s very exciting and I meant that. I don’t know who I’m meeting. It may be the next Spielberg, who knows. Everybody is like when the Fender bass came out, so many people didn’t know squat about music but they all did it. And they’re still doing it today. A lot of rock shit. With film it’s the same way. I go in for everything. I mean, at my age, my contemporaries either look like Methuselah or they look alright,” he says as everyone laughs.

Speaking of all the films that people make nowadays, Barbara Crampton had an interesting point. “It’s funny,” she said, “because Larry, you probably know a lot about this, but I think in the Midnight Section here at SXSW, there was something like 2,500 films submitted and only 10 got in. So, where are all these other films?

“I want to know who’s watching all these films,” Fessenden joked.

“But there’s a film festival every one or two months and someone is making all those films,” Crampton added.

I’m always fascinated by people that complain that no one makes good films anymore because I just want to tell them, “Have you tried a film festival?” Go see a film that isn’t released on 2,000 screens every weekend. There are tons of films out there.

“That’s so true,” Fessenden said. “There are so many great movies. Even with horror, you run into that. People complain about horror because they see the films that are released on 3,000 screens and they become dismissable. But there’s this whole other level of these little can-do films that are exploring the dark side and just as edgy as horror used to be.”

We Are Still Here is now in limited release and available on VOD.