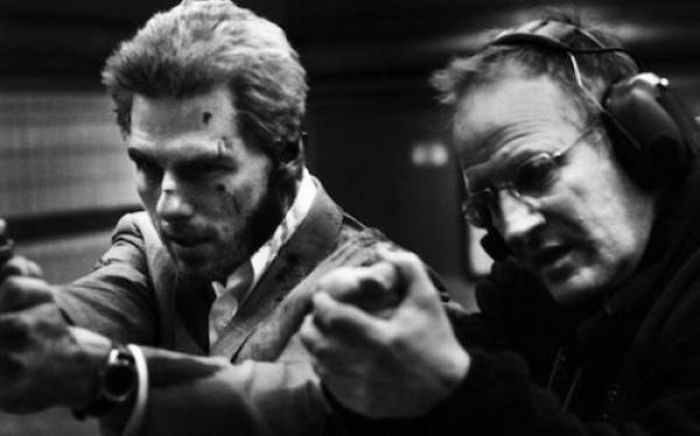 While his high-profile, epic dramas such as Heat, The Insider and Last of the Mohicans are often the most revered in many circles, for my money, Collateral might be my personal favorite feature from Michael Mann. Featuring one of Tom Cruise‘s best performances and pushing the landscape of digital cinematography forward, the one-night thriller is one of the great LA movies and today we’re taking a look behind its making.

Aside from the jazz club shoot-out, one of the most memorable aspects of the film is the relationship between Cruise’s slick hitman character Vince and Jamie Foxx‘s Max, who is taken hostage. While Adam Sandler was initially circling the latter role, Foxx got the part and today we have rehearsal footage between the two leads. Featuring a long-haired Cruise, the footage is interspersed with the final product, and even features Mann chiming in a few times.

“It couldn’t have been shot anywhere other than LA. If someone had said, ‘You have to shoot it in Chicago’, I wouldn’t have made the movie,” Mann tells Film4. “LA’s the most exciting city visually, in terms of locations for motion pictures. It can be so gorgeous and beautiful that it becomes distracting. And that was not what I wanted. There’s an inherent poignancy, I believe, in certain visuals in Los Angeles when they’ve got a patina of corrosion. Now they’re just elegant manicures, so there’s no Bel Air, or Beverly Hills. We glimpse the Geary building at the beginning in daylight, that’s it. There’s none of the elegant environments in LA. I wasn’t interested in that. I was interested in places that are used, that are dirty and dusty.”

Check out the rehearsal footage below, along with behind-the-scenes b-roll, combat training, a deleted scene (with Mann commentary), and an interview with the director.

For more, including Michael Mann’s commentary track, pick up the Blu-ray (for under $6).