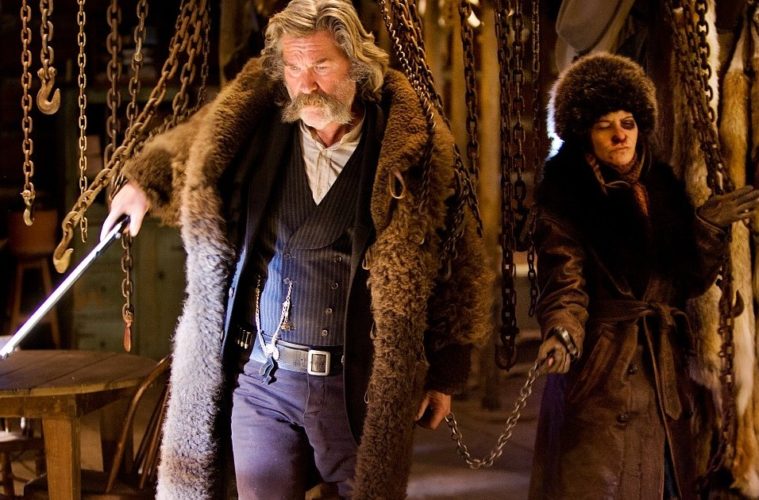 While we’re not yet allowed to expand on our thoughts when it comes to Quentin Tarantino‘s The Hateful Eight, its placement on our December preview should tell you everything you need to know before our official review is posted. As we still await the full list of theaters showing the snowy western in 70mm, today we have a number of (mostly spoiler-free) pieces to notch up the anticipation to even greater level.

First up, and most substantial, the director recently sat down with Ben Mankiewicz for an extensive one-hour conversation in which they discuss all things Tarantino. Beginning with talk about The Hateful Eight, Tarantino compares the 70mm experience versus the digital (which he notes might be more intense, as there’s no intermission). They also discuss the intriguing casting, as there are few major A-list stars in the ensemble, perhaps aside from a cameo.

Segueing into Jackie Brown, Tarantino calls it his “most sober” movie, and attributes Mankiewicz’s ability to rewatch it on end as it being a great “hangout movie.” They also talk about the minor negative reaction to some of his work, calling out Armond White. “I can’t be deterred by social critics,” Tarantino says, noting that they come and go, but “movies are forever.” Also, for your yearly Kill Bill: Vol. 3 update, Tarantino closes out saying, “There is definitely a possibility.”

Along with that conversation, there’s another 30-minute talk with the director as well as a 30-minute ensemble Q&A with Samuel L. Jackson, Kurt Russell, Jennifer Jason Leigh, Walton Goggins, Demian Bichir, Tim Roth, Michael Madsen, and Bruce Dern in which they talk about preparing for the film, working with Tarantino, and their distinct characters.

Lastly, we have nearly 10 minutes of B-roll footage going behind-the-scenes of the production and, for those that want an early peek at the result, there’s eight minutes of footage. While I’d highly recommend avoiding it if you want the best experience possibly, it’s not all that harmful as it’s from the first half of the film. Check out everything below, along with a new featurette and banner.

Update: A new two-hour conversation has now arrived with Tarantino and Bret Easton Ellis, and can be listened to below, as well as other talks.