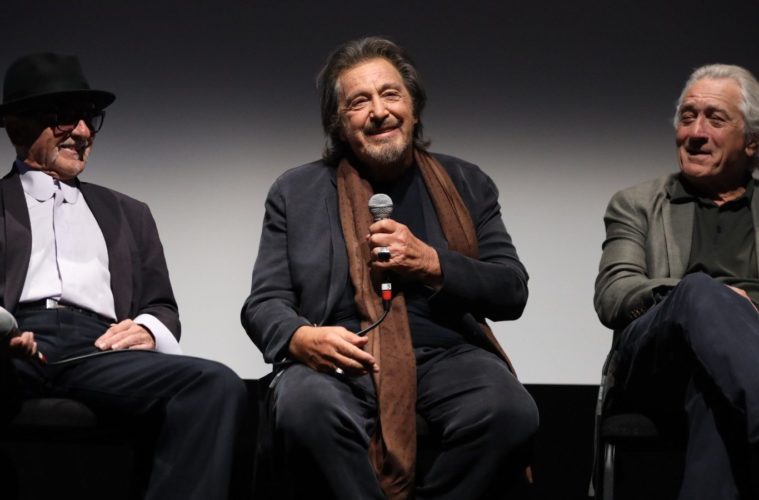 After being in the works for over a decade,  Martin Scorsese’s The Irishman finally premiered at the 57th New York Film Festival on Friday. Following the press screening, the director joined Robert De Niro, Al Pacino, Joe Pesci, and producers Emma Tillinger Koskoff and Jane Rosenthal for a discussion on the making of this crime epic. While Pesci stayed mostly silent in his first public appearance in quite some time, the others on the panel explored the mechanics behind the expansive production and finding a heart to the story of Frank Sheeran and Jimmy Hoffa.

Vikram Murthi said in our review, “It’s a critical cliché to describe a filmmaker’s late-period output as elegiac, nostalgic, or any other adjective that suggests an aging artist grappling with their own mortality. With that said, Martin Scorsese actively courts this framework for his latest film The Irishman, a 209-minute crime epic that reunites him with actors Robert De Niro and Joe Pesci, with whom he hasn’t worked since Casino in 1995. All three men, along with co-star Al Pacino, are septuagenarians who have been working in the film industry for upwards of half a century. To watch The Irishman means to confront their age, history, and inevitable decline. Scorsese filters this idea through a dramatization of a mob enforcer’s life, but there’s no ignoring the self-reflexive mode on display.”

Check out the press conference below, along with an NYFF conversation featuring The Irishman cinematographer Rodrigo Prieto and more.

The Irishman premiered at NYFF and opens in limited release on November 1 and will be available to stream on Netflix on November 27.