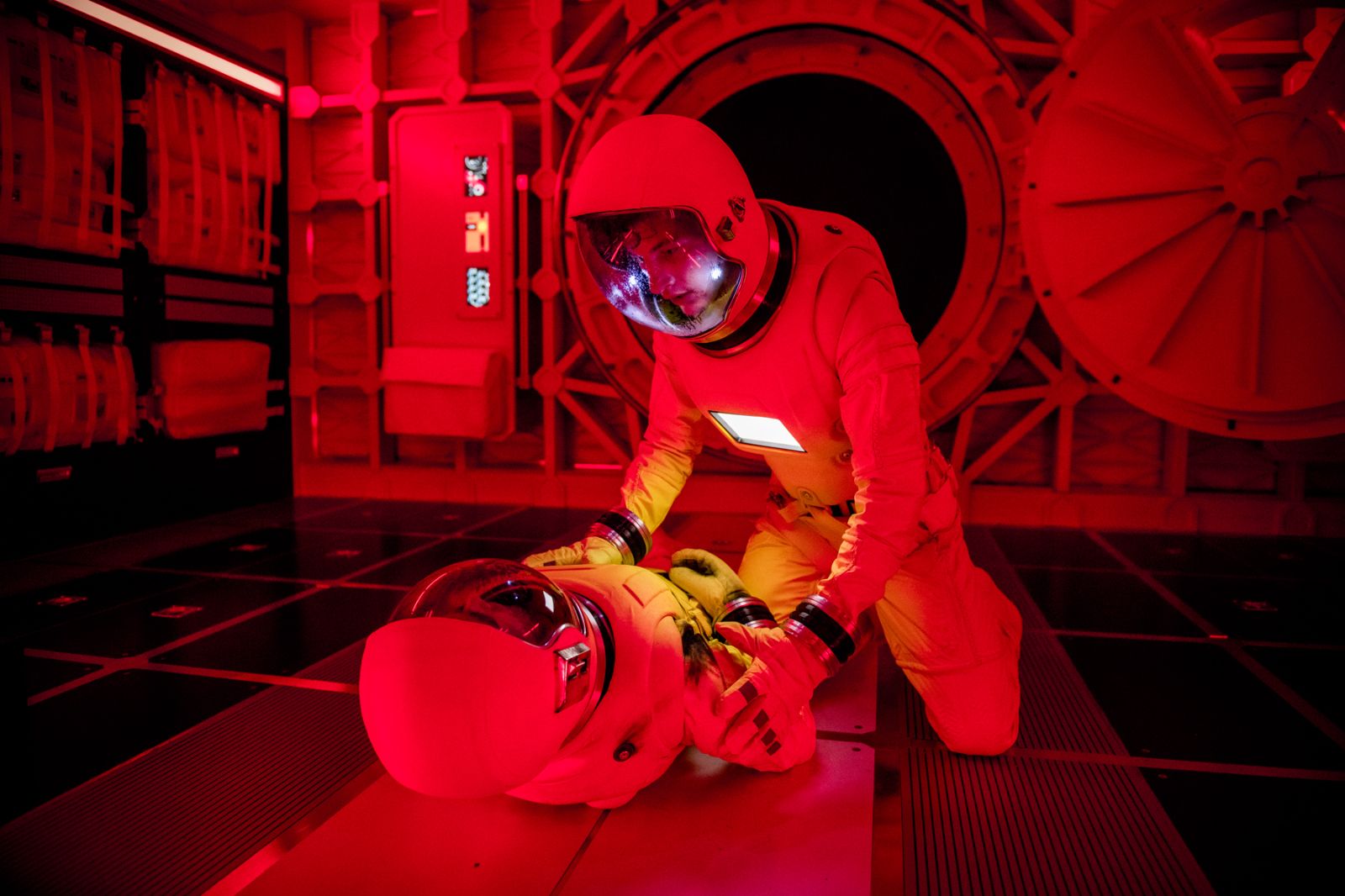 Neil Burger, director of 2014’s YA adaptation Divergent, returns to the form of teeny-bopper dystopian parable with Voyagers, a sci-fi thriller combining 60s-vintage high concept with Trump-era anxiety. In the not-too-distant future, humanity’s best and brightest minds (personified by steely American technocrats of no clear institutional or government allegiance) conclude that life on Earth is doomed, and prepare a deep-space travel mission to colonize the most suitable host planet––a solid 86 lightyears from home. The pragmatically and ethically dubious decision is made to crew the ship with a batch of test-tube babies spawned from “elite” DNA (Nobel laureates, et al) and trained from birth to carry out their crew duties, eventually spawning the next generation in similar fashion. One adult scientist of natural birth (a soft-eyed Colin Farrell) will accompany Gen 1 as the lone steward and surrogate parental figure to this spacefaring society of the young.

Burger neuters the film’s mythic resonance and culture shock potential by awkwardly laying all this out in a gratuitous Earth-set expository prologue before flash-forwarding to the bulk of the action in space. Now grown into a gaggle of blank-faced teens, the crew’s harmoniously rigid lifestyle under Daddy Farrell begins to splinter when alpha male Goofus and Gallant duo Zac and Christopher (Fionn Whitehead and Tye Sheridan, respectively) discover they’re being drugged with a syrupy blue goo to keep their would-be raging hormones in check. (Sample dialogue: “Decreased pleasure response?? I want IN-creased pleasure response!!”) Going off the goo yields MTV rapid zoom effects followed by goofy montages of screensaver-sanitized erotic and violent imagery (imagine a Disney Channel version of Alex’s “slooshy” fantasies in A Clockwork Orange) as the teens succumb to their volcanic caveman id with acts of spontaneous violence, chaos and PG-13 sex. (And, in a shocking extended scene that may inspire more than one parent to turn off the movie, sexual assault.)

As more crew dumps the goo and chaos escalates, a mysterious disaster throws the ship’s fraying hierarchy of leadership into full Lord of the Flies anarchy. Rather than follow through on its established conflict between repressive systems of control and Hobbesian conception of human nature, however, the film swerves into the much easier and duller YA-standard territory of conflict between clearly defined heroes and villains, sprinkled with none-too-subtle #Resistance allegory. “This is not who we are!” cries an unnamed Black, female side character at the height of goo-free sectarian violence, just as the laser guns come out. It turns out the real source of discord on the ship isn’t so much the unpredictable human urges inside these characters nor the dehumanizing system that (quite literally) created them, but one nefarious bad apple who manipulates the children’s fear to become a de facto dictator, disregarding the results of a democratic election. (How his disposition for Antichrist-like behavior slipped by the lab geniuses who crafted each kids’ DNA is never explained.) In the end (spoilers ahead) defeating the villain precipitates an instantaneous, painless return to democratic normalcy, with no further questions asked––the kind of Disneyfied naïveté that will leave young audiences perfectly unprepared to navigate the troubling political realities of our own fraying democracy in the present day.

Burger and DP Enrique Chediak lack the visual acumen to truly elevate this material above its shoddy script (also credited to Burger). As opposed to the Ridley Scott-set visual standard for the deep space thriller as regularly switching between intense, claustrophobic closeups and romantic otherworldly vistas overwhelming the human figure, Burger opts most of the time for clean and typically dull middle shots, occasionally going handheld to simulate an intensity that never truly sets in. Being set almost entirely onboard a giant flying social/science experiment may give the film decent excuse to be visually sterile and claustrophobic, but it doesn’t so much excuse the glossy, overlit, over-digitized color palette.

Main narrative thrust aside, Voyagers almost hits something with its images of technologically-mediated alienation. The cleverest visual moment involves Farrell recording a video message for his colleagues on Earth using a familiar Skype-like interface, until a popup window announces the number of weeks before they will receive it. Under his regime, touch between teens is strictly forbidden, and thus an obsessive fixation for the main rebellious duo; this detail may or may not have been present before Covid-19 lockdowns, but it’s sure to ring a bell with young people who have spent the last year and change similarly banned from the transformative act of touch. It’s a familiar traced sketch of 20th century imagined dystopias, but Gen-Z trappings evocative of our own looming dystopia offer a slightly new shade of color. It just isn’t vivid enough.

Voyagers is now in theaters.