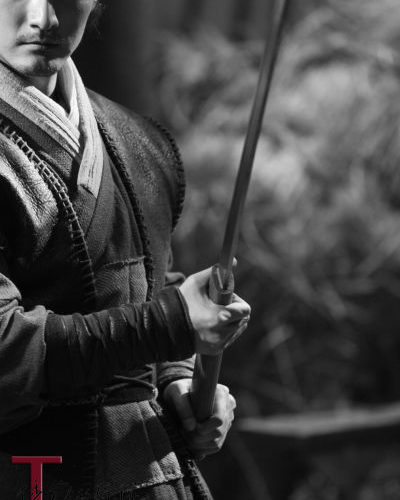 With his screenplay for The Grandmasters coming to the big screen next year by Wong Kar Wai, writer/director Haofeng Xu gives us the first taste of his creativity with an adaptation of his own novella, Wo kou de zong ji [The Sword Identity]. A mix of comical playfulness and serious martial arts, the script has some impressive camera compositions to allow for intriguing visuals, acting that is consistently earnest throughout, and fight choreography that’s a joy to experience. All those things do little to help from wondering why the plot is so elaborately sprawling, though, a contentious point lessening the film’s effectiveness by assaulting us with never-ending diversions. The press notes for the Vancouver International Film Festival do describe it as a ‘deconstruction of classic martial arts cinema traditions’, so perhaps I’m just missing something in the translation.

Listening to the plot will help to understand how crazy it all is—for better or worse depending on your level of knowledge with the genre. Taking place during the Ming dynasty, an era of martial arts has ended. Two great generals have passed on and their teachings are about to disappear alongside them. When Japanese pirates invaded China years ago, their weaponry was unparalleled. It was up to Qi and Yu to devise a plan for victory, the latter creating a five-man formation for battle and the former an appropriation of Japanese swords to fight fire with fire. Both proved to be effective and not only helped drive the invaders out, but actually eradicated all forms of piracy completely. So China was now in a state of peace with little ‘fun’ to be had until a mysterious warrior (Song Yang) arrives to show his might.

Chinese himself, this fighter is the last of Qi’s disciples and the final person able to continue teaching his master’s skills. Unfortunately, however, the weapon he has brought along with him is one that looks to be of their enemy. Although he could handily defeat the four houses of martial arts to prove his worth, the thought that he fought with a Japanese sword disqualified him from seriously having a chance to build a new school of fighting. So the protectors of kung fu drive him away with threats of death, dub him a Japanese pirate, and set up a competition in the province to battle for a chance to go after him. But as men, young and old, ready for the opportunity and the head of the coast guard arrives utilizing the five-man attack, the mysterious warrior holes up in a boathouse brothel of Japanese dancers to await his chance to strike.

All that may seem somewhat simple until you hear the other details surrounding this central crux. A grandmaster named Qiu (Yu Cheng-hui) returns after leaving for the mountains while his wife Shi (Zhao Yuanyuan) beds her guard (Ma Ke); the coast guard general is selfishly hoping for victory to earn a suit of armor made out of iron instead of the paper one he has; the leader of the four houses, Qie (Ma Jun), hasn’t touched a weapon in years, but feels as though the time to unsheathe his bamboo mace has come; and our nameless warrior’s favorite dancer (Xu Fujing) ends up forgoing her hope to watch the fighting by becoming a fighter herself. You see, while our hero rescues his deputy and proves his sword isn’t Japanese, but instead the weapon General Qi used to defeat them, he needs to teach Fujing a foolproof move to best the strongest and wisest fighters come to defeat the ‘pirate’. Yang’s character pulls this ruse often since he must be in multiple places at once. He rides his enemies to test their stamina, educates the dancer with half of Qi’s style and Shi with the other, and not only has the confidence for success but the ability to prove it. His enlisting of two women to do his dirty work, however, lets the comedy find a way in. The big men with spears all fall to the fragile flowers hiding behind curtains and shadows with only a blunt instrument and carefully timed counterattacks at their disposal. Laughs also ensue from the bumbling cowardice of the coast guard—these five compatriots easily manipulated and none too bright—while we hear more dramatic tales from Qiu and Qie about the legendary Qi and how their new fighter could be worth giving a chance to prove himself after all. The work now falls to Xu’s script to make sure no one actually kills each other before these revelations can occur.

There is a lot going on—no one can deny this fact. Because of the sheer number of characters involved, the filmmakers must give everyone equal opportunity to eventually reveal their role in our lead’s fight for his master’s honor. Tongue-in-cheek for much of its runtime, the goofiness would have been better served elsewhere in my opinion. Rather than become a straight-on comedy, the serious aspects of martial arts epics remain to give the movie a schizophrenic inability to know what it wants to be. I feel that The Sword Identity could have been much better if it chose a path because the backbone is solid and the action is stunning in its orchestration. With extra-long bladed swords exiting from wooden staffs, the inventiveness is enough to pique one’s interest. Add the constant full use of its widescreen frame for visual tricks off screen and fun sight gags on—there is a lot to like. It’s too bad the whole isn’t as effective as its best parts.

The Sword Identity is currently playing at the Vancouver International Film Festival.