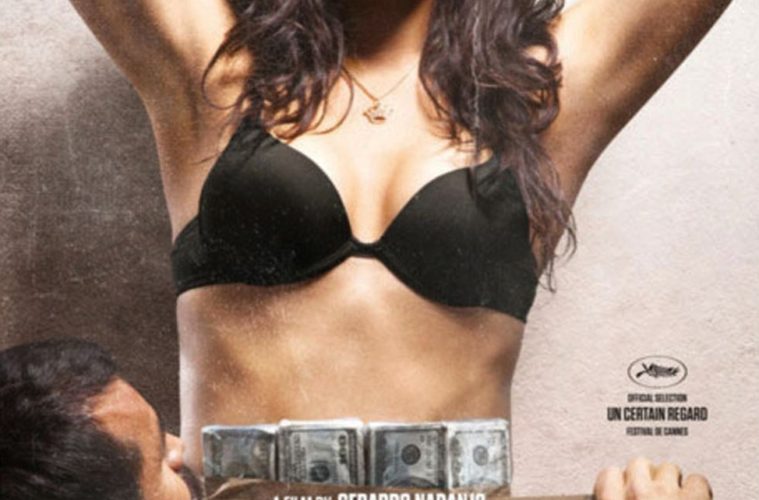 If you ever have a daughter that begs you for entrance into a beauty pageant and you can’t bring yourself to comply, pop on Miss Bala and she’ll never ask again. Taking place in Mexico amidst an unwinnable war on drugs, Gerardo Naranjo’s film portrays a never-ending series of impossible situations for its star. All Laura Guerrero (Stephanie Sigman) wanted was to have fun, wear beautiful dresses, and flaunt her body. But like twenty-somethings in any culture, kids who enjoy partying get mixed up in things out of their control. When her friend Suzu’s quasi-boyfriend Javi takes them to a club, no one could have anticipated the world of pain to follow. The girls finally decide to leave, but not before a militant group of criminals descends into the women’s bathroom to ambush what is a DEA soiree, unloading machineguns into the crowded room.

Caught in the middle of a war between US/Mexican law enforcement and cartel La Estrella, Laura unwittingly becomes the poster child of her country’s heinous activity. Having seen ringleader Lino (Noe Hernandez), this 23-year old has no choice but to follow his every instruction. If that means driving a truck outside the US Embassy, have stacks of cash duct taped to her midriff, or seduce a military general marked for assassination, she must control her emotions and try to survive with her life. Verbal, sexual, psychological—all forms of abuse are thrown her way as the empty promises of finding Suzu gradually make way for clarity of understanding. Away from her father, little brother, and anyone who knows and loves her for the promising young woman she is, her drive to be Miss Baja California ceases to exist. Replaced by bribes and fixed judging, her victory becomes the perfect cover for the cartel’s newest coerced infiltrator.

Naranjo and Mauricio Katz’s script deliberately takes us onto Laura’s descent into hell, never letting the faintest glint of hope squeeze through the cracks. Story is stripped down to its minimalistic form, allowing the performances to tell it by emotion. Sigman’s innocence, ravaged with every step she takes towards an escape that will never come, is jubilant optimism replaced by a tear-streaked look of horror. It’s a performance deserving of the comparisons to Catalina Sandino Moreno’s portrayal in Maria Full of Grace’s look at the travesties occurring every day in Mexico, one that earned her an Academy Award nomination. Never out of frame—oftentimes shown from behind to prove just how emotive one can be by the posture of her shoulders—Sigman is pulled through the ringer, battered and broken, until the point where one must wonder if dying in that DEA massacre days before would have been a better fate.

But no matter how authentic and devastating the events shown or how effective and brilliant her reactions, the question remains: How much suffering can one person take? Or, better yet, how much suffering are we as an audience willing to experience? About halfway through Miss Bala I began to feel uncomfortable and emotionally drained but what I was made to watch. Those sentiments were also felt by those around me, laughter soon seeping into audience reaction despite the subject matter being anything but funny. For Naranjo, I’m sure this is a great victory, showing the world the ugliness of what has now become synonymous with his country. There is no room to lay on the brake as what Laura is forced to do escalates to the heights of all reality fracturing. All that’s left by the end is the body of a scared girl—one powerless to fight back or even cry anymore.

And in that regard—no matter the intentions of the filmmakers or not—I cannot fully endorse watching this movie on the merits of its story. The crimes committed begin to meld into one and the monotony of horrific actions becomes too hard to bear. Perhaps if Miss Bala were a short film, condensing the atrocities for full impact rather than the two-hour long slog through more and more and more, it would have made a more effective impact. In its current form, though, I became numb to the subject matter a I was left to wonder when the violence would stop, hoping Laura Guerrero would be put out of her misery so another unsuspecting young girl could take her place. Yes, I wished for the destruction of another innocent soul just so long as the one I watched dragged over hot coals without remorse could finally be at peace.

It’s tragic subject matter to say the least with Sigman and company’s stirring performances not helping to delineate fact and fiction when millions of real lives are lost each year. But no matter how much I wanted to be spared around twenty-five minutes of its runtime, I do wish the visual style could have gone on forever. Technically breathtaking with carefully constructed scenes and framework by Naranjo and cinematographer Mátyás Erdély, the sheer magnitude of intelligent camera-pans and full use of sets is mind-blowing. These filmmakers are never afraid to blur foreground or back, to shroud faces in shadow or even block them completely by another’s head taking up three quarters of the frame. No, the shots themselves could provide a full year of material for film classes to dissect and appreciate the precise timing and detailed control over every single aspect before and after the director yells ‘Action!’

The stunning compositions and intricate design only helps Sigman appear more natural with the lack of sharp cuts or continuity errors. We experience her suffering as she emotes without filters. To see her convulsions in confused disbelief by what transpires is heart-wrenching as we are forever aware this is a girl who would love nothing more than to go home, curl under the covers, and never leave again. Miss Bala is therefore a nightmarish look into the cruelty of humanity and the injustice of wrong often prevailing over right. Whether she lives or dies isn’t important because as soon as she is made to relinquish all control over her moral compass, her lifeblood is extinguished. Rather than hope for a happy ending, we can only sit helplessly and pray for an end. And while that reaction shares its message to its utmost ability, it sadly does little to make me be able to give it a universal stamp of approval.