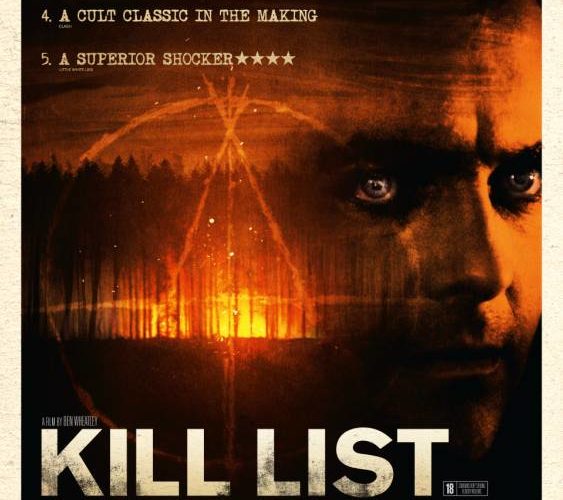 Some films find a way to surprise, intrigue, and confound all at once, leading you down a rabbit hole that becomes bleaker with every step as it uncovers secrets you’re ill prepared to understand because the characters themselves are too. What starts off as though a psychological horror, burning slow to introduce a seemingly normal suburban family going through a rough patch with the British economy in recession soon turns into a bloody romp that is almost too serious in its actions. Between the over-the-top marital strife snowballing into shouting fits that scare their young son and make you wonder why Jay (Neil Maskell) and Shel (MyAnna Buring) are still together and the comical back-and-forth of he and an old war buddy Gal (Michael Smiley), you become lulled into a false sense of humor-tinged chaos before Kill List’s truer, darker intentions are made clear.

You think nothing of Shel’s inability to hold back frustration that their nest egg of forty thousand has been depleted and Jay’s unemployment streak has reached eight months. He doesn’t seem to get it, his actions too calm when the threat of being unable to pay bills isn’t far into the future. They argue often and harshly, the screaming always making its way into apologetic words with their son and unbelievably quick turnarounds into reconciliation. Edited together with abrupt jump cuts in an almost time lapse progression, director Ben Wheatley takes us through their angst by showing brief glimpses of cause and effect without lingering on the actual fights themselves. One second shows tear-streaked shouting and the next a good-humored romp in the backyard with foam swords and a peaceful sheen of love.

The sense of dread grows as a result of this process, the plot moving towards an inevitable revelation to warrant its horror categorization. We are prepared for what comes as Gal arrives with a new girlfriend, Fiona (Emma Fryer), for dinner. Jay and Shel are on edge the whole time and their friend can sense it, his attempts to steer the conversation into levity only pushing the married couple over the edge towards a massive blow-out unbefitting of any event where guests are present. Gal doesn’t seem too surprised, however, the volatility of this relationship a common fact to give him the confidence to console young Sam that his parents are just arguing a bit and will make up soon. But their actions do confuse the audience, still unaware of the military past this trio holds—the men fighting together on secretive missions that led them to an unknown event in Kiev and she a volunteer soldier in Sweden.

So things become a tad clearer. These people aren’t as afflicted with suburban woes as we thought. They have legitimate pasts that hold dark secrets and horrific deeds, the psychological weight heavy on their souls. The true nature of the films’ title is soon revealed as a new job for Gal and Jay, an influx of money for the small price of killing three men. With the off-putting and frightful demeanor of their mysterious client (Struan Rodger), the realization these men aren’t looking for desk jobs is made clear. The prospect of money is all that’s needed for these contract killers to find the murderous mindset necessary to put bad men in their graves. It’s also enough for Shel, surprisingly apprised of the situation and all for seeing her husband back to work. Here is where Wheatley and co-writer Amy Jump’s script goes haywire. All the quiet moments from the start are removed as Jay’s penchant for violence is unleashed on the men their list orders to die—a Priest, a Librarian, and an M.P. They’ve done this before and they are professionals, but something is different this time around as it all appears to be personal. Gal can’t control his friend as he goes off the rails, the bloodlust too strong to contain as it drags them deeper into an abyss without escape. By taking the job they have put their lives on the line. With no way out, the mission must be completed even though it’s made clear they are being watched. Someone knows what happened in Kiev; someone is using that knowledge to scare them into killing strangers they know nothing about. And behind it all is the odd, cultish symbol we watch scratched onto the screen during the opening credits—an insignia marking them for what’s to come.

To say more would be ruining their descent into a hellish world unforeseen by what came before it. A first act of normal, working class hardships makes way for the second’s violent rage and extreme gore, but not even that transition prepares you for the third’s horrors. If I were to equate Kill List to any other film I’ve seen recently, I’d say it was a tamer, more introspective A Serbian Film—words that could strike fear in some and mean nothing to others. It’s a spin on the normal good versus evil plot that goes off the rails, the creepiness of Rodger and Fryer barely offset by the more grounded Maskell and Buring. Casting a guy like Smiley, (Tyres from Spaced and a known comedic talent in Britain), means humor will be included, but by the end of the film you will forget you laughed at all.

The chaotic conclusion is so rapid in its progression that you’ll become disoriented and hard-pressed to remember what came before it. Ideas of reality and insanity come into question, the occult and fire taking over where a family trying to survive leaves off. And while I still can’t quite wrap my head around it all—can’t shake the feeling some, if not all, occurred inside the mind of our lead—I can’t say it didn’t captivate me completely. I seriously want nothing more than to see it again to try and solve the riddle at its center as too much shown is left unexplained. Its randomness is too deliberate to be anything but calculated and purposeful. The beast that is the memory of war has risen to the surface; the unpredictability of man’s action its driving force towards self-destruction.