Venice Review: In Viaggio is a Fascinating Rorschach Test of the Pope 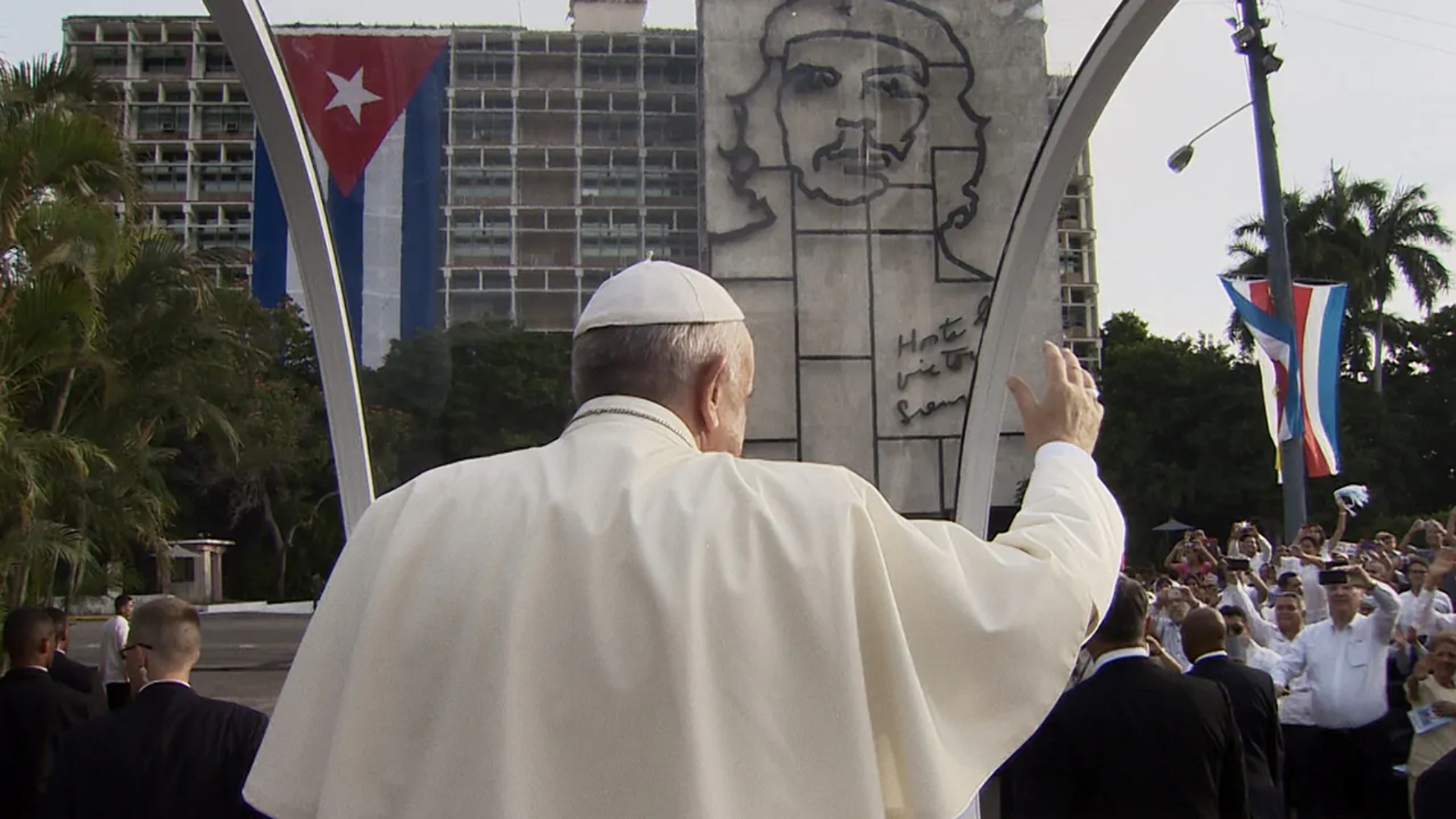 Following The Young Pope, The New Pope, and The Two Popes, the time has officially come for the Woke Pope. In Viaggio, Gianfranco Rosi’s fascinating Rorschach test of a documentary, is also something of a People’s History of Pope Francis, pontiff since 2013, in that it largely consists of television broadcast footage of the man on his sundry global travels, though the filmmaker wisely deigns not to visualize his popular Twitter account. We don’t glimpse him from his own subjective point-of-view, as Fernando Meirelles and Jonathan Pryce attempted to show in their version; instead Rosi privileges what the global Roman Catholic membership and also what curious nonbelievers and secular onlookers observe—the dignified outer surface. And intriguingly enough, it’s a fairly flattering picture as one of the world’s oldest, most powerful institutions attempts some crisis PR in front of the contemporary world’s gaze.

Rosi, a documentarian who’s cemented a secure following after a decade of critical and industry success, offers light editorializing. He decided to pursue another arguably unnecessary docu-portrait of one of the world’s most documented people after realizing they’d both traversed some of the same ground over the past decade amidst their activist outreach—notably the island of Lampedusa, a flashpoint location in the refugee crisis, which Francis visited in 2013 before Rosi commenced filming Fire at Sea, and then the Middle East, the focus of his 2020 work Notturno, which was accused of providing an overly generalized view of the region after the fall of ISIL. What makes In Viaggio a valuable (as opposed to another negligible) study of the Pope is Rosi’s deft understanding of this subject, and his openness for the audience to decide what to make of all his rhetoric.

And to return to what can reductively be called “wokeness”: what’s striking in all of Francis’s words to his cross-continental flock is the absence of anything religiose; rather, he stands regally at his pulpit decrying under-regulated capitalism, harsh border policies, intolerance, and discrimination while promoting tolerance, inter-faith dialogue, and decolonization—a proud, if mostly inoffensive liberal humanist agenda. He offers variations on this from Havana to Nairobi to Occupied Palestine while also being profusely apologetic—if not much more than that—about the Church’s sex-abuse scandals and its historic role in the colonization of indigenous lands. Rosi really leaves it up to us to be fully persuaded by this or, contrarily, see it as a great illustration of the large gulf between saying and doing, especially where the vastly powerful and oligarchic are concerned.

Francis’s nine years as the Catholic Church’s figurehead have seen him take 57 trips across 53 different countries; Rosi sees this dedication to travel as an “intellectual and spiritual practice; a reverse pilgrimage, so rather than followers streaming from remote places to the Vatican, the pope himself travels to the people.” Paolo Sorrentino, in his adroit HBO series, conceived of a pointed alternative, with St. Peter’s Square in the Vatican emptied of revelers and the “young,” Italian-American pope dedicated to a retrograde, authoritarian, and old-fashioned interpretation of the religion.

And what of the potentially short-lived downtown New York vogue for Catholic conversion—a “return to traditional values,” however sincerely we want to interpret that? Though Rosi’s film might be overlooked by potential viewers as it leaves the comfortable environs of domestic festival showings, it’s still a greatly artful piece, a visual essay deeply attuned to how Catholicism is evolving in the modern world and how its chief corporeal symbol on Earth can alternately help with his avid faith, or instead hinder us with his lofty, untouchable manner. Which is par for the course as the symbolic, paramount representative of a religion—something to think about in a week which saw the death of Elizabeth II, the UK’s head of state.

In Viaggio premiered at the 2022 Venice International Film Festival.