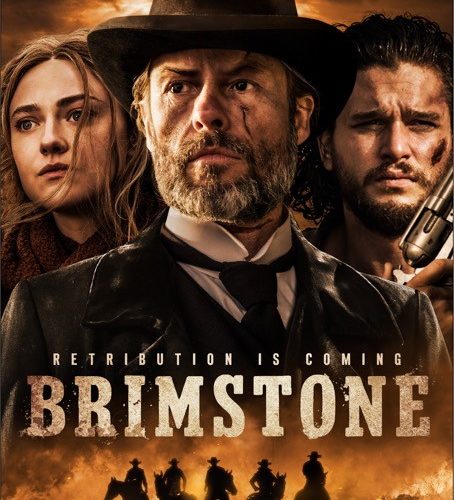 On paper, Brimstone has a lot going for it: it’s an ambitious European production that’s been shot in multiple countries to capture the essence of iconic American landscapes; it’s a western, but it infuses the genre with elements of a much-needed woman-centric story that’s mixed with an immigration angle — both of these having resulted in some of the liveliest entries the genre has seen in recent years. (Meek’s Cutoff and The Salvation spring to mind.)

Too bad, then, that Dutch director Martin Koolhoven shows the heaviest of hands in approaching the story of Liz (Dakota Fanning), a mute woman with a storied past. When we meet her, you can still sense the alertness in her eyes, even though she’s at peace with her acquired family — husband Eli and teenage son, Matthew — her young daughter, and her role as childbirth assistant in their community. As soon as Guy Pearce’s conspicuously scarred Reverend shows up to take control of the local church, however, the film gets into psycho-religious horror-trip mode and never lets go, obliterating any potential nuances or characterization work in the process. As single-minded as the Reverend is in his pursuit of Liz (“She gotta burn at the stake!”), Brimstone fires off all traditional signifiers of a grand epic — a big, loud orchestral score, sweeping panoramic shots, a four-act structure comprising Genesis, Exodus, and Apocalypse before the inevitable Retribution.

This is the kind of film in which people aren’t just hanged; their neck breaks with the sound effect of live oak snapping right down the middle. (That’s when simple rope is employed. In its quietest moments, the Reverend prefers to hang fellas with their own intestines.) Spouting religious nonsense from the altar, blasting threats in a flame-engulfed close-up or standing in the darkness with his face lit up by thunder, Pearce is presumably having lots of hyperbolic fun in the role. And, aside from a sketchy accent, one seemingly paying homage to each country they shot in rather than being firmly planted in the Netherlands, his intense presence matches the seriousness the film treats him with. He’s convinced they are the chosen people for a new world, while also believing to have complete and total authority over his wife (Carice van Houten, who memorably ends up in an iron mask as soon as she decides to fight back) and the prerogative to marry his teenage daughter once “blood has taken her innocence.”

While the first part is the most accomplished, allowing Fanning to do something else other than running for her life and suffering tremendous punishment, there is something to be said for the tightly focused “Genesis,” which explores this twisted, ominous spell of family life in the Reverend’s house. Koolhoven stages all the action between the house and the barn, two settings connected by a narrow, curved walkway of pale wood in a sea of pitch-black mud. This is where the film’s fixation on menstrual blood as the ultimate symbol of imperiled womanhood almost transcends its own material, aided by the frustrated point of view of the cocky but gallant outlaw (Game of Thrones’ Kit Harington) who’s hiding in the barn. You know very well what function that character must serve, and it’s a sad irony that what the film treats as a joke ends up being one of its most poignant metaphors. As someone said in the first act, “some things are not meant for men’s eyes.”

Ultimately, Brimstone is built on a “feminist” concept in the same way that relentlessly repeating “feminism” until you can only hear disjointed syllables equals talking about feminism. Even worse, this concept only relies on the repeated, repetitive abuse of multiple generations of women in order to emerge, and is diminished by various self-satisfied, cheap-thrills choices that feel badly out of place. Shame, as there was a more articulated, sui generis western in here somewhere.

Brimstone premiered at the 2016 Venice Film Festival and opens on March 10.