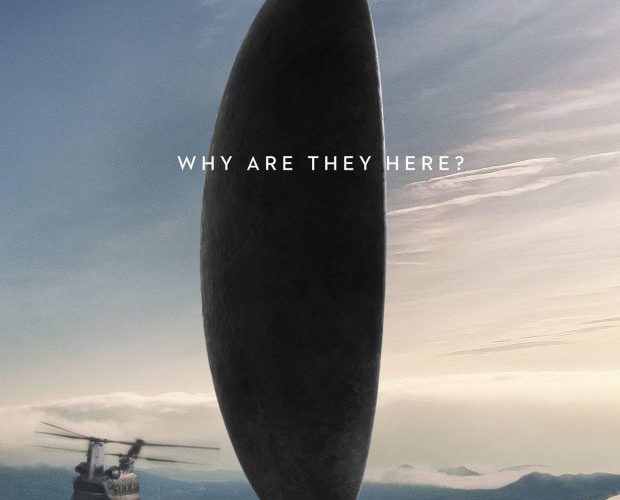 In Arrival, prolific Québécois director Denis Villeneuve ponders the ramifications and possibilities of a potential first-contact between human beings and an advanced alien race and comes up with a sporadically incoherent film, but also some interesting ideas. This is, perhaps, largely thanks to the Ted Chiang novella, Story of Your Life, upon which the film is based. Adapted by screenwriter Eric Heisserer, Arrival can never quite seem to navigate the novella’s trickiest knots and U-turns. However, Villeneuve does manage (in his characteristically stylish manner) to get to the story’s core idea: that our understanding of the world is both the reason for and result of the language we use, and that a message of war on one side can easily be read as a message of peace on the other.

Amy Adams plays Dr. Louise Banks, a renowned linguist currently lecturing in a Montana university. She’s haunted by visions of her deceased daughter — tragedy and parenthood, the quintessential Villeneuve themes. Louise is called in by the military when, one day, 12 alien ships appear in apparently random spots around the globe. She’s led by Forrest Whitaker’s Colonel Weber, who shows up to her office and plays an audio recording taken from the ship. Weber presumes Louise can make some sense of their guttural, whale-like moans because she translated some Farsi for the military a few years back. “But I knew that language,” replies a deadpan Louise. The needle scratches off the record. Irony has left the building.

Dr. Banks joins up with the first-contact task force, a military operation set up on site in Montana to communicate with our extraterrestrial guests. It consists solely of army personnel and one physicist, Ian (Jeremy Renner). By this point in time, of course, the Russians and Chinese are already flying off the handle. Naturally, the U.S. thinks to send a linguist and a mathematician.

As the team goes forth, Villeneuve takes the chance to flex some visual muscle. Every few hours the group must enter the huge, vertically standing, oval-shaped ships by going in through a bottom hatch that hovers in stasis about 20 feet off the ground. Inside the structure, gravity and depth seem somehow relative, and Villeneuve — working with cinematographer Bradford Young (Selma, A Most Violent Year) for the first time — extracts thrills by playing with our perception of each.

As is usually the case with short-form science fiction, Arrival has its twists. We know what Louise’s job is and exactly what she’s there to do, so it’s safe to say that contact is made and languages begin to be deciphered. Misunderstandings also happen. We probably shouldn’t go much further.

Louise’s passion to communicate is quite infectious, and the audience is asked to ponder whether language is a tool that unites us or drives us apart. At one point, Louise mentions the Sapir-Whorf hypothesis, a theory developed in the 1930s that stated that the structure of our language ultimately affects our worldview. Arrival considers that topic and turns it into a high-stakes, hard sci-fi action film. Sadly, it doesn’t grasp the more slippery moments of Chiang’s story, thus failing to cogently translate them to the screen. Forrest Whitaker’s audio recording is a major clangor, and another moment with a handheld device later on is even trickier still. We’ve said too much already. Despite these hang-ups, Villeneuve’s execution here bodes well enough for Blade Runner 2.

Arrival premiered at the 2016 Venice Film Festival and will hit theaters on November 11.