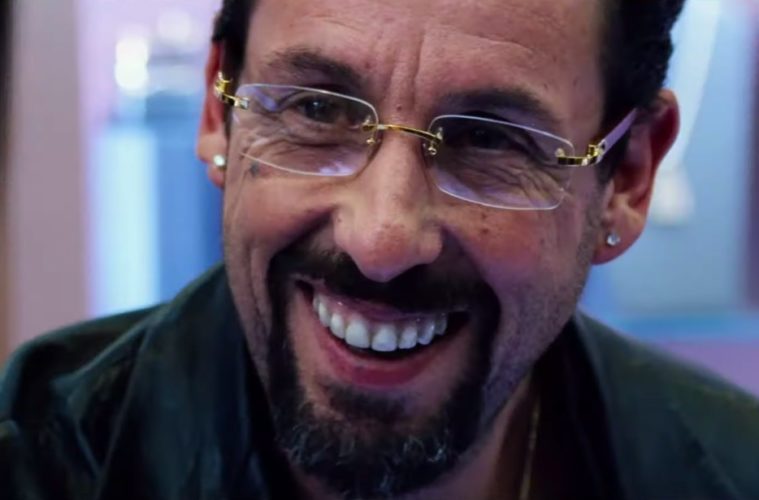 After naming Good Time the best film of 2017, expectations were sky-high for the Safdies’ follow-up Uncut Gems and it looks to have delivered the goods. Ahead of a December release, A24 has now released the first trailer for the Diamond District thriller starring none other than Adam Sandler. Also featuring Lakeith Stanfield, Julia Fox, Kevin Garnett, Idina Menzel, Eric Bogosian, Judd Hirsch, The Weeknd, and Mike Francesa, it’s certainly one of the wildest casts of the year, which seems to match the Safdies’ kinetic approach.

Josh Lewis said in his review, “Sandler delivers one of his very best physical performances as Howard, making us genuinely feel every heated exasperation and crushing failure of his as he schemes and sweats his way all across New York City streets, cabs, and venues in garish Gucci shirts and loafers. At one point he physically flees his daughter’s school play, greeting her backstage as he literally runs away from bruisers sent by the debt collectors planning on stripping him naked and beating him—a great gag complicated by the threat violence. And beyond just the beating he’s about to receive that opening scene of violence still lingers too, leaving us with palpable tension as we’re left to watch Howard’s volatility, irresponsibility and neglect stack and all his plates begin to crash one-by-one.”

See the trailer, poster, and TIFF conversation below.

From acclaimed filmmakers Josh and Benny Safdie comes an electrifying crime thriller about Howard Ratner (Adam Sandler), a charismatic New York City jeweler always on the lookout for the next big score. When he makes a series of high-stakes bets that could lead to the windfall of a lifetime, Howard must perform a precarious high-wire act, balancing business, family, and encroaching adversaries on all sides, in his relentless pursuit of the ultimate win.