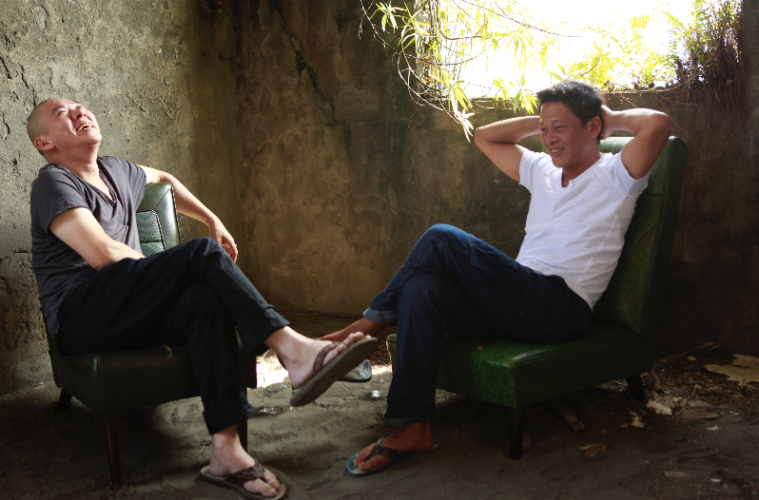 One of the best films premiering at this year’s Venice Film Festival, I said in my review of Afternoon, “It’s always been easier to review Tsai Ming-liang’s films than to make sense of them. Characterized by an often impenetrable language of silence and immobility, the Malaysian-born, Taiwan-based filmmaker’s work triggers all kinds of intuitive response that writers crave, yet those same writers might be hard-pressed to explain what they’ve just seen on screen. In this sense, Afternoon poses the exact opposite dilemma, in that it’s by far the most verbal and straightforward project from Tsai – but how do you assess, evaluate, grade something so close to life you’re not even sure what to call it in cinematic terms?”

Featuring Tsai and his long-time actor-of-choice Kang-sheng Lee as themselves in an extended, unscripted conversation shot on static camera, Afternoon has no discernible narrative arc, resists somehow also the categorization of documentary. I had the chance to sit down with the director to discuss this project, and much more, during a roundtable while at the festival and one can read our full conversation below.

I’ve always been very open about myself. And my movies have always made people uncomfortable. In Taiwan, this movie first appeared as a book. So journalists were excited about all the “scoop” they found in it. As far as I’m concerned, however, there’s no scoop here. It’s my life, I’ve never been secretive about it. Kang-sheng Lee and I, we just rarely talk about it. And I mean, what are movies supposed to be about if not private thoughts and emotions? The creative process is inevitably private. People might think it’s strange for artists to bring their private life into the films they make, but that’s exactly what we do and what we ought to do.

You also shared things about your creative process in the film, which many directors avoid doing.

This is not a film on filmmaking. The reason why I inquire about Kang-sheng Lee’s process in the film is that I almost never communicate with my actors. So when we had a chance to talk like this, I was genuinely curious to know what was going through his mind when we shot this scene or that. It was definitely not my intention to lecture on filmmaking or share my method through this film. Everyone approaches filmmaking differently anyway.

Many filmmakers also avoid the discussion of what cinema is, but you seem ready to engage in such discussions.

I remember when my fifth film Good Bye, Dragon Inn premiered here in Venice, every single one of the journalists – well, at least all the Occidental ones – asked me the same question: “What is cinema?” I was excited by that question because it hadn’t been discussed enough. Just now another journalist pointed out to me: “There’s never a script to your films.” I asked him in response: “Do you think a film must have a script?” He answered with some exasperation: “Yes, of course!” This serves to prove my point that cinema has been industrialized, commercialized nowadays. Within that structure, there’s not much room for creativity anymore. So we actually need to re-think what cinema is under such circumstances.

When this film was revealed as part of the official line-up, the initial festival designation was neither feature film nor documentary, but the curious term “non-fiction.”

People have often had trouble categorizing my films. The Marseille Festival of Documentary Film wanted to have the Walker series in competition, for example, to which I said: “It’s not a documentary though!” The programmers simply responded: “But we think it’s a documentary!” So film festivals all have their own criteria, and many of them are willing to be flexible when it comes to my work, which is often hard to categorize. This year, I purposefully submitted Afternoon to the Golden Horse Awards as a narrative feature, almost as a prank to see how they’d react – and sure enough, it got eliminated.

But did you set out to make a narrative feature or a documentary with Afternoon?

I didn’t think in those terms when I was making it. But after I saw the finished movie, I felt like I was playing myself in a way – like I was the co-lead of my own movie. We were getting filmed after all. So even if we weren’t “performing”, we were kind of playing ourselves. There was actually another film festival that wanted to have Afternoon in their competition as a narrative feature — they thought it’s a love story! But in the end I chose Venice to premiere the film.

For me the product of a creative process doesn’t have to be categorized one way or another. But the world we live in works in very standardized ways. It demands you to put things in categories. A short film or a feature film must be how many minutes long etc. I never quite understood such rules. I’ve tried to break these restrictions with my work before.

In the movie you talked about selling tickets to your films on the streets of Taiwan, which seems quite a contrast to the kind of rock-star status you enjoy at A-list European film festivals.

Well, I started out doing theater and have always had a commoner’s perspective. I don’t think of art as something exclusive or elusive. Directors aren’t emperors. Whether I go on the streets to sell tickets or get treated differently at film festivals, I find it all very normal, because the circumstances are different. Lately I’ve been busy preparing for an exhibition in Guangzhou in connection with the museum screenings of Stray Dogs, where I also needed to do promotional work to sell tickets, giving speeches everywhere. People were surprised how low-maintenance I was but I thought it’s the most logical thing in the world. This is what the circumstances require. My goal is clear: I want as many people to see my work as possible. Whether they’ll like it or not is another question.

You seem to really enjoy challenging the conventions, the rules, even at such traditional, classic film festivals like Venice.

In Asia, especially in Taiwan, I rebel even more strongly again any form of establishment. I chose not to release my films in cinemas but in art museums. And even then I would change the usual practice of art museums. I made them extend their opening hours to nighttime and allow people watching my films to sleep in the museum. Art museums also have their share of established rules, which I think only makes them less approachable for the public. And when people see my films in a museum, they also tend to be more open-minded about them – the slowness doesn’t seem to be a problem anymore. So I do like to play with these rules about how things are supposed to be done. In Taiwan I’ve also shot a 23-minute film to be shown in cinemas. In the ad campaigns I asked the question: Must a movie be 90 minutes long?

Can you talk about the genesis of the project Afternoon?

After Stray Dogs became a prize-winner at the Golden Horse Awards and at the Venice Film Festival in 2013, people became really curious to see the movie. I insisted on showing it only in art museums, because otherwise it would have been the same small group of ticket buyers who’d see it in cinemas. This idea got the attention of some publishers, who contacted me to write a book as a companion piece. I thought it’d be boring to go the usual route and publish the script, attach some film stills and making-of materials. So I came up with the idea to have an in-depth discussion with Kang-sheng Lee, who’s the focus of Stray Dogs. After we shot the whole thing, I watched it back and thought it’s actually quite nice, visually in particular. Together with the images, it became something that’s more than just words. So I decided it should stand as a cinematic piece.

Your films, including Stray Dogs, have often raised the critique that they’re not films, but art pieces.

Well, film is art. That’s why I always go back to the essence of film when I make one. And for me that’s the image and not the story, not even the performances. So I spend most of my efforts on perfecting the images of my films. You can look at it the other way around too. In 2007 I was invited by the programmers of fine arts to do an exhibition at the Biennale, but my concept for the piece was still film.

Where did this refusal to stick to labels come from?

It is true that I’m wary of labels. I’ve never liked limitations since I was little. I think that has a lot to do with my childhood. I grew up in Malaysia in the 60’s. Back then things were fairly relaxed, free. The limitations came later. And they made me uncomfortable. After I left Malaysia and started working in Taiwan, I also encountered many limitations. A screenplay should be written in a certain way, for example. I always tried to rebel against such rules and was fortunate enough to meet many people along the way who supported me. After I started making films, my work quickly found its way into the European market. The European investors or distributors were much more open-minded.

You mentioned you rarely communicated with your actors. But, from Kang-sheng Lee to Shiang-chyi Chen (female lead of Stray Dogs), you coached such amazing performances out of them! How did you do that?

It’s different with individual actors. With Kang-sheng Lee, you don’t need to coach him. All you need to do is give him a scenario. Because of his age and living experiences, he can naturally give you the appropriate response. In the case of Shiang-chyi Chen, it’s more about getting rid of things because she, as a student and now a professor of performance arts, carries too much baggage with her. As a director, all I’m after can be simply described as authenticity.

The 15-minute dialogue-free penultimate scene of Stray Dogs is already legendary. How did you make that work?

My goal as a filmmaker is not to create drama, but to craft images. So scenery is of the utmost importance to me – the actors must become part of the scenery. When that happens, they’ll be able to express everything there is to express. The scene you mentioned we shot twice. The first time I quickly yelled cut because it was obviously not working. But we got it the second time. The thing is, filmmakers generally work under a lot of restrictions like running time, storyboard, plot etc. I don’t submit myself to such restrictions. Of course, I face a different kind of challenge as a result. The process I need in order to get to the result sometimes seems pointless. A scene of two people standing next to each other for an extended period of time, for example. At some point it also strikes me as empty. But should I accept this emptiness? Emptiness is a part of life after all. These are the questions I have to consider before making my decisions. So I allow imprecision in my work from time to time. I actually like this imprecise quality. It strikes me as true to life. The audience responds to this kind of film differently as when they watch conventional dramas, where they know when to laugh or cry. Instead, everyone would have their individual reaction. To me, that’s the proof of true creative work.

Afternoon premiered at Venice and screened at TIFF.