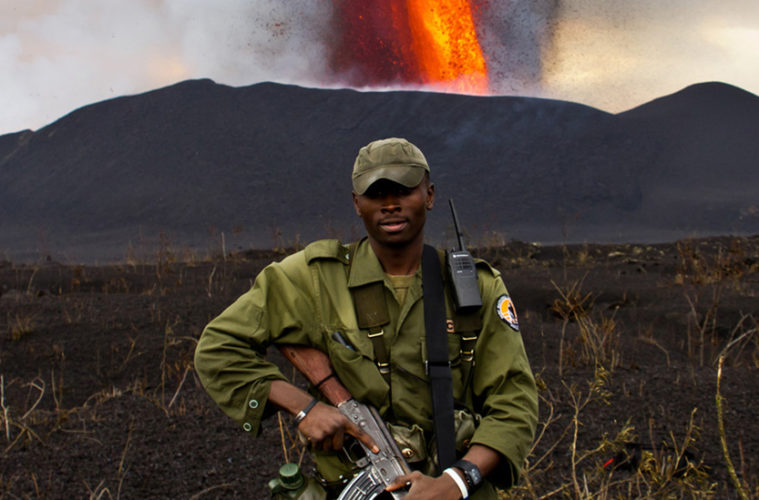 Employing multiple modes of documentary storytelling, from talking heads, undercover reporting and on-the-ground war reporting, Virunga is a potentially paradigm-shifting entry in the genre that deserves the kind of support and attention Blackfish and The Cove received. The deep geopolitical conflict is embodied by the Virunga National Park, a UNESCO-designated world heritage site. It’s a 3,000 square mile zone encompassing villages and wild life preserves, in a story told by multiple narrators that is perhaps the most direct telling of a truly complex system of interactions.

Guarded and in constant conflict from corporations and rebel groups, director Orlando von Einsiedel’s story continues with no resolution. Weeks before the film’s premiere at Tribeca, interviewee Emmanuel de Merode, the park’s warden and a Belgian royal, was shot by three gunmen. de Merode is considered a controversial figure and out of place, a Belgian who commands a local army and oversees the preservations efforts. Virunga is, in essence, a sanctuary set up to correct Africa’s history of colonization. The film notes in 1885 the Congo was ruled with an iron fist by western corporations plundering, and murdering, in the name of profits; not much has changed it would appear. A film like Virunga is a miracle, as it also allows us to witness brave filmmaking and reporting, especially by Melanie Gouby, an undercover reporter who employs hidden cameras during her friendly interaction with oil executives at upscale restaurants, blurring perhaps the ethical boundaries of the film. SOCO, the London-based firm had been authorized in 2010 by the Congolese government to drill on the protected site, creating conflict between the firm and de Merode. For his part, de Merode is essentially a general, and in the film’s climax he prepares for and is forced into a war with rebel groups including M23, also chronicled in undercover reporting by Gouby.

Virunga is constantly in conflict, as native animals in the sanctuary are forced into captivity and socialized by trainers for fear if left in the wild they will be slaughtered. Opening with explicit footage of a massive Gorilla slaughter by rebel groups “sending a message,” Virunga certainly makes the case for the importance of this work while SOCO has only released PR spin to prepare for what may soon be a viral outcry. The connection between M23 and SOCO isn’t, of course, 100% clear, and is denied, but certainly their interests intersect.

Granted intimate access to this story, one would hope for a positive conclusion. The fact of the matter is this film a shaming and call to action exposing the sausage making at the core of this conflict. A difficult story to summarize, the film is a gripping documentary that, without the presence of the filmmaker, also explores the nature of reporting on these conflicts. Melanie is forced into uncomfortable social situations, befriending and perhaps even flirting with those who will stop at nothing to turn a profit, including sending a message in blood. Virunga is captivating filmmaking with first-rate reporting.

Virunga is screening at the Tribeca Film Festival and Hot Docs.