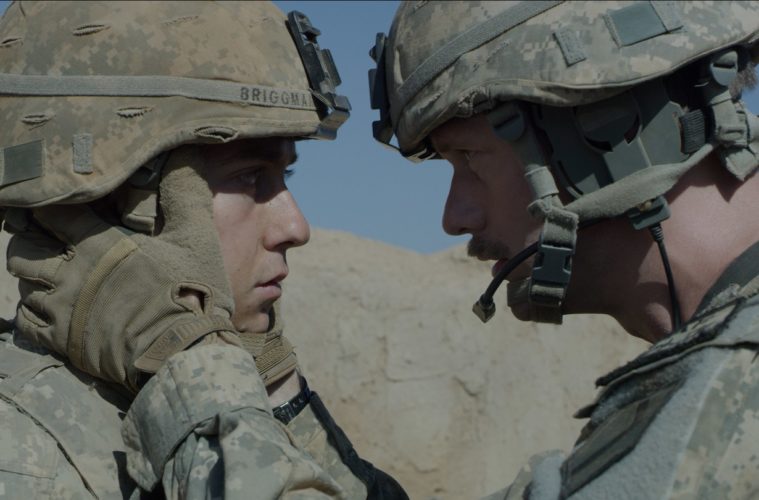 Adapted from his 2013 documentary of the same title, Dan Krauss’ The Kill Team is an alarming look at the culture of toxic masculinity, turning a documentary about a family’s struggle in the military justice system into a white knuckle war thriller. Nat Wolff stars as Andrew Briggmann, inspired by the real story of Adam Winfield (chronicled in the documentary), an 18-year-old kid sent to Afghanistan where soldiers had a hard time seeing exactly what the point of their deployment was while working a checkpoint. When their commanding officer, a believer in hearts and minds, is blown up by a landmine right in front of his command they’re sent a charmingly charismatic killer Sergeant Deeks (chillingly played by Alexander Skarsgård) who primes his young team, including Briggmann, with the precision of a child molester, building trust, prying on his victims, and employing them to keep their mouths shut.

Deeks is a rebel with multiple combat tours and Briggmann, the son of an analyst with a desk job, is a blank slate. When Deeks rewards his men with a cookout, he gets that eerie glimmer in his eye when Briggmann tells him he likes his steak bloody. The film is far from subtle, punctuating what in screenwriting class we call a “boxing match” in dialogue as good kid Briggmann finds himself outmatched by the deprived Deeks once he starts questioning platoon reports. He’s clued into Deeks’ interest in killing the enemy for sport, pitting two gunners against each other in a depraved type of fight club and fudging the details later. Deeks is a guy that can get things done, with friends in multiple branches from the investigative units to those that can score the best hash in Kandahar.

It’s impossible to ignore the statements Krauss is making five years after telling this story in his acclaimed documentary. Released a year and a half into the #MeToo movement, the film is a study in just how powerful, successful, and charismatic men get away with hideous crimes as Briggmann and his father find themselves fighting an uphill battle to bring Deeks to justice. The turning point comes in the senseless execution of a tribal elder for sport.

The Kill Team is a psychological thriller with a large scope, exploring both “relationship building” and the battle for “hearts and minds” as much as “shock and awe.” Briggmann, like Winfield, is confronted with difficult decisions, deciding to turn on the killing machines that Deeks sets out to make in his own image. This version of The Kill Team is a visceral study in masculinity divorced largely from sexuality or even sexual identity. Killing in the name of revenge is just a way to both pass the time and prove you’re one of the tribe. Krauss packs a lot into what could be read as a prequel for his documentary, creating a brutal war on terror picture with a timely context.

The Kill Team premiered at Tribeca Film Festival and opens on October 25.