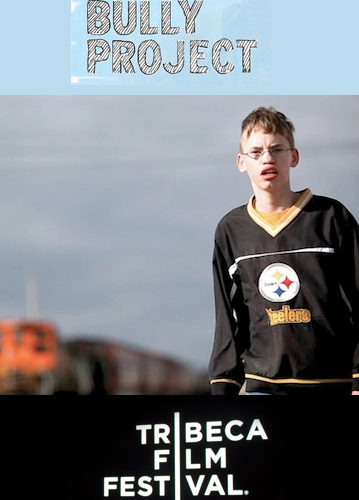 After seeing Amandla! A Revolution in Four Part Harmony, the feature documentary that earned Lee Hirsch awards and acclaim at the 2002 Sundance Film Festival, I was intrigued to hear he had a new documentary. This film is The Bully Project, an honest, eye-opening glimpse into our country’s bullying crisis.

In the film, Hirsch follows a handful of bullied children, as well as well as the families of bullied children and teens who have committed suicide due to bullying, over the course of a single school year. It opens with the David and Tina Long from Chattsworth, GA, recounting the 2009 suicide of their son Tyler. While the bullying that Tyler received wasn’t overly physical, it was emotional abusive, and it tortured him in such an insurmountable way, that the only escape he could find was in ending his own life. The family, while working through their grief, has made it their mission to keep Tyler’s voice alive in speaking out about the issue in their town, trying to protect other children with the sense of safety that Tyler was denied.

It is heartbreaking to see young children dealing with the effects of bullying, but perhaps the scary part is watching adults trying to grapple with the solution to it. One of the moments that stuck with me the most was when a school’s vice principal, in a moment of frustration after questioning two students on two sides of a physical argument, turns to the camera and says, “Tell me how to fix this.” In that moment, she captures the unsettling truth; even if we admit this epidemic is happening right in front of our eyes, there is no clear solution, no easy answer.

I can only imagine how difficult it must have been to gain access to for this film, first because of the need to peer inside a school, and secondly to peer inside a child’s life, to give the honest, rounded perspective to show the many dimensions of the issue of bullying. Perhaps the most telling story is of Alex, a student within the Sioux City Community School District, under the administration of the aforementioned vice principal (and let it be noted how brave it is for a school system to place themselves under the microscope of scrutiny to shed light on an issue). In this scenario, we see the school administration resolving fights and handling the bullying that happens in front of them, and yet there’s Alex, a young 14-year-old boy who is constantly harassed both verbally and physically by numerous students daily, and no notice is given. His parents very clearly care deeply about him and his safety, but what actions can a parent take when their child’s safety isn’t guaranteed in their place of learning?

I have yet to meet Lee Hirsch, but I can only imagine he is a parent, due to the care and grace in which he handles his subjects. As someone that has worked a great deal with young children, that while one can often get kids to open up in moments when they are upset, such as the moments when they cry after a school fight, but for the moments of deep reflection, when a child really looks within and admits their insecurities and pain, those moments only come when true compassion and trust has been established. The testimonies that contribute to this film speak worlds about Hirsch’s character as a filmmaker, as the courage of his subjects who were brave enough to let their stories be the face of many.

Arriving in the wake of last year’s series of gay teen suicides, I hope that the timeliness of this film will help enforce the importance of the message, and how in need the conversation on this topic truly is. Like other informative documentaries, this one is a call to action, to encourage personal responsibility amongst children and adults alike in not allowing bullying to persist, and to actively speak out against it, that every person has a voice and can be the difference.

The film, while it stands strong on its own, it is also part of a grassroots movement, hoping to eventually have the film screen within schools, sparking these needed conversations in communities across the country. For more information, be sure to check out the movement’s website, or feel free to donate to the film’s finishing funds. If there was ever a story worthy of your support, it is this one.

I highly recommend this film, it is extremely well made, and I hope it is seen by all members of a community, especially every teacher, parent, and child.