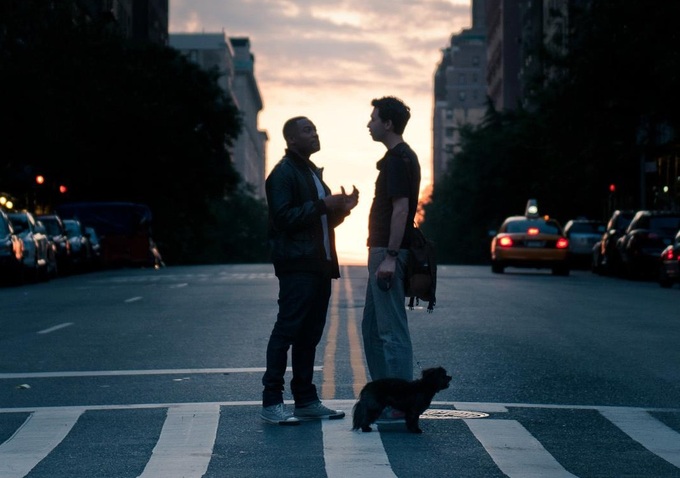 As films about film go, Daniel Schechter‘s Supporting Characters is relatively low-fi stuff. Concerning an editor named Nick (Alex Karpovsky), his assistant editor Darryl (Tarik Lowe) and the duo’s attempt to save a film as well as their personal relationships, the film, while a tad recycled, slowly grows into a comfortable, relatable piece.

Taking severely from Albert Brooks’ seminal rom-com Modern Romance, Schechter knows what works and what doesn’t. The majority of the film relies of Karpovsky’s natural knack for comedic timing, Lowe serving as a more-than-capable sidekick who longs to be much more than that. We watch Nick navigate long-term girlfriend Amy (Sophia Takal) and the idea that a more attractive, more famous girl – the star of the film to be exact (played by Arielle Kebbel) – might be interested in him. Meanwhile, Darryl is too excited about a new relationship with a domineering girlfriend named Liana (Melonie Diaz).

Featuring a blink-and-you’ll-miss-her cameo by current indie “It” girl Lena Dunham, Supporting Characters serves as a small yet significant step forward in the world of the micro-budget film. Despite its sometimes lacking production values (the boys are cutting a feature film that looks like it was shot on a cell phone) and slight over-simplification of film production politics (a nice moment with an entitled director of photography notwithstanding), the film observes its characters without much judgment, refusing to give in to the same cliches the film within the film is giving in to. All four part of the two central relationships shine here, with only Diaz wanting for more screen time. These are real situations and real conversations we’re seeing, surrounded by one too many sit-com-infused situations. The majority of these come from the director of the film within a film, played by Kevin Corrigan. Corrigan, though a solid character actor, is wasted in a role that allows for only ridiculous scenes and lines that do little more than relegate his filmmaker to a poor satire of an inept artist.

On the other side of artists, Kebbel is given plenty to do with her movie star, finding both the conceited and apathetic side of being a performer. She grows to like Nick because he’s kind, then ignore him for an abusive, more dangerous ex-boyfriend.

In general, the film is rough in its pacing and editing style. Schechter appears to be a filmmaker still discovering his specific style. And yet the film proves that real characters and a relatable story can elevate sloppy transitions and hasty production. With any kind of budget, it’ll be interesting to see what this group of creatives can produce next.