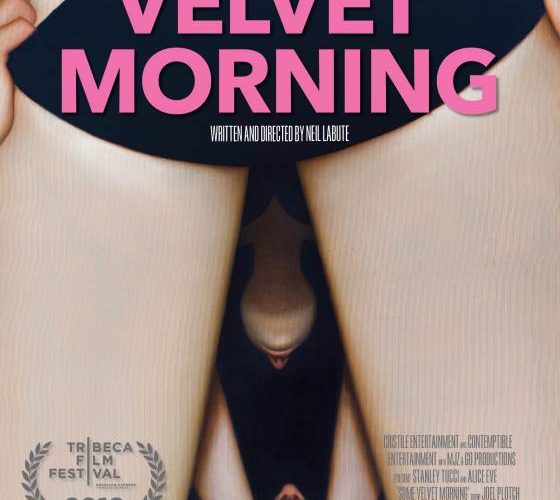 Since you have arrived at this film review, you do not like to enter the theater cold. Here’s my challenge; Some Velvet Morning is a demanding film to talk about by virtue of the fact it is not what it seems to be. Its reason for existing in this form (verses a stage play) becomes apparent once the clues are revealed and the very fact I have revealed a twist exists in itself is a spoiler. So perhaps this is where you may wish to leave this page.

Some Velvet Morning by Neil LaBute stars two actors at the top of their game, Alice Eve as Velvet and Stanley Tucci as Fred. Fred arrives to Velvet’s Brooklyn loft one morning with luggage announcing he’s left his wife. A cat and mouse game transpires; Velvet admits she had feelings for Fred but has a date scheduled with his son, whom she occasionally sees. Velvet is an “escort” who puts herself though school by soliciting the wealthy dads of the undergrad boys she’s dated, slipping a note in their pockets reading “Girl for Sale.”

So, like infomercials and Danny Boyle movies have trained me, I expected a “…but wait, there’s more” moment. Velvet is not like someone in love, which so happens to be the title of another recent film about a high end “escort,” but strong-willed, pushing Fred’s buttons. It’s all about the sex for both of them. They banter in an extraordinary dialogue-heavy film, sharing equal screen space until the revealed twist, when we learn this is why this has taken film form and is not a stage play. Some Velvet Morning grows tiring and somewhat predictable and lacks the cruel freshness of LaBute’s first feature film In The Company of Men, with a twisted ending that confirmed the extent of the brutality of his well-drawn characters. Some Velvet Morning is more in the spirit of his second and fifth film as director, Your Friends and Neighbors and The Shape of Things, the latter adapted from his play. It never really “opens up” the material for cinema, relying on dialogue. Here the dialogue-heavy nature is essential to the twist, although the twist is painfully apparent (or should be to a student of LaBute’s prior work).

Also interesting is the downsizing of a filmmaker who has always been upsizing; a return to form after several larger mainstream efforts, including his only first date-safe movie Possession, the Nicholas Cage bomb The Wicker Man, the effective psycho cop thriller Lakeview Terrace, and questionable yet effective remake of Frank Oz’ Death at a Funeral. Some Velvet Morning doesn’t exactly break any new ground, especially for Labute, but it’s a compelling, uncomfortable watch.