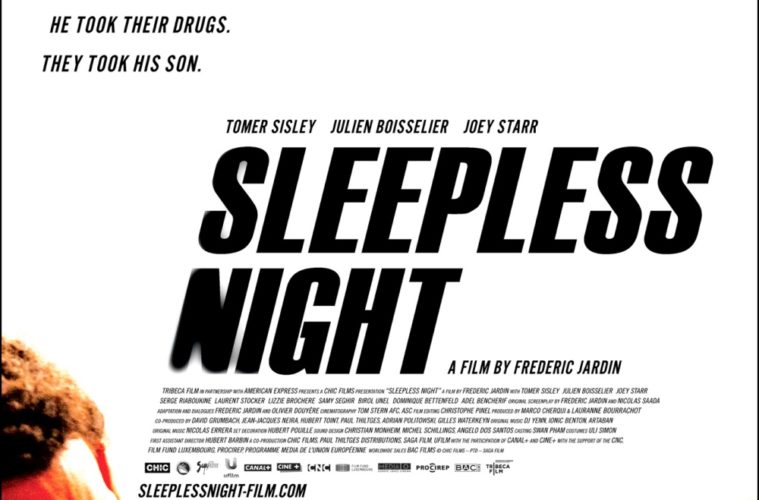 This year’s Tribeca Film Festival has a slate of new works from buzzed about filmmakers, compelling documentaries and films packed with some of critics’ favorite stars. But one feature that’s already been absolutely slathered in praise is an action film out of France with no stars known stateside from a director (Frédéric Jardin) formerly unknown. And rightly so. Daring, dynamic, and inspired Sleepless Night elevates the action genre to mind-bending and intoxicating territory with a fast-paced plot that’s peopled with intriguing characters, clever reversals, and above all relentless action. The narrative follows Vincent (Tomer Sisley) a cop with a bad temper and a dangerous tendency to mingle with merciless drug dealers. Once he crosses the wrong crook, his teenaged son is abducted, which forces Vincent to lie to his colleagues, cheat his partner, steal a duffel bag filled with cocaine, and weave his way through the labyrinthine nightclub that serves as headquarters for a sneering kingpin. Most of the movie takes place in and around this overcrowded hot spot, with Vincent being chased or impeded by his cowardly partner, an overeager rookie cop, an intense internal affairs officer, a psychotic triggerman, and two batches of drug dealers thirsting for a fight. Often movies set in one location feel static and confined, but Sleepless Night never loses its edge, finding new inspiration in each room of this gargantuan club. Fight scenes break out on dance floors, in bathroom stalls and even the kitchen—where in a frenzied attempt to get the upper hand combatants throw everything at each other including the kitchen sink! Literally.

It’s this sort of scrappy, free-for-all attitude that gives the film a manic urgency along with fight choreography that willfully rejects the glossiness of Hollywood action in favor of a more honest and palpable style of violence where characters flounder and stagger in a way rarely seen in movies. Simply put, the action is visceral and never lets up. And Sisley and his many antagonists handle all this fight work with an incredible aplomb. But moreover, they manage to etch out actual characters in the midst of all this madness, giving us a rare and real emotional connection to these action movie figures. Vincent is a stoic man with a striking ability to con his way out of many dangerous situations, so he’s hard to get to know. Yet Sleepless Night refuses to offer an easy or simple shorthand for why you should relate to Vincent. Instead, it keeps his motives—aside from his need to rescue his son—a mystery for most of the film. What binds us to him is Sisley’s extraordinary screen presence, which exudes heat. We’re offered no snappy rejoinders or smirking quips to get us to rally behind him; he’s all business, which grounds the film’s stakes and heightens its tension masterfully.

Basically, Sleepless Night—from its performances to its twisted plot to its impeccable action setups—is a well-oiled machine. With a wild and gritty energy it’s a non-stop thrill ride that demands the audience keep up as it careens through dizzying plot twists as fast and fluidly as Vincent weaves through the club’s treacherous dance floor. Mark my words: this will be a landmark film that action auteurs will attempt to copy or best for years to come.

Sleepless Night is now available nationwide on VOD and a limited theatrical release will follow on May 11th.