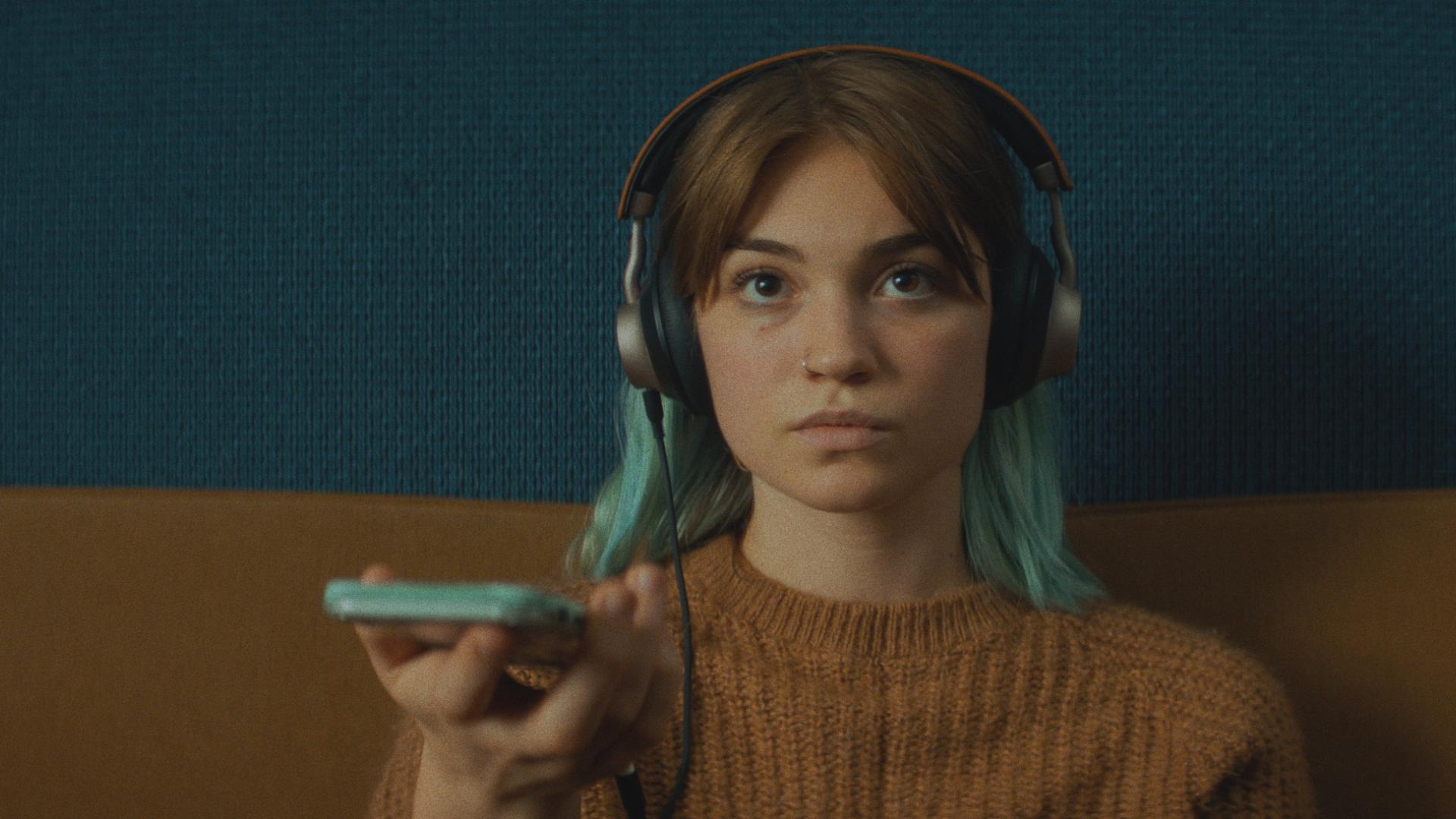 If one wants their voice heard in the year 2021, start a podcast. So it goes for Lennon (Sylvie Mix), a poser with some delusional behaviors who lies to cultivate her personality to fit into the local art scene. A somewhat familiar story about obsession set adjacent to the unique world of the underground music scene in Columbus, Ohio, Poser is a charming and dark debut from directors Ori Segev and Noah Dixon.

The opening scene finds two people talking about a painting at an art show. The pair comment about the painter’s brush strokes and how it’s about instinct. We then see a quiet, blue-haired Lennon emerge to grab her phone that she planted next to the painting to record what people are saying. With a classical score in the background, the opening scene feels tragicomic in its suggestion, reminiscent of the recent work of Yorgos Lanthimos. It quickly establishes that Lennon is a liar and has no personality of her own. She writes down what other people say so she can remember to pass it off as her own opinion later, attempting to manifest a false connection to the art world that isn’t anything beyond skin deep.

Although Lennon has a stunningly dark and beautiful voice––as she’ll exhibit in one song––she lacks ambition to create original music. It’s a fascinating way to go about creating an artistic self. She uses her faux-podcast to obtain information from other artists, stealing their lyrics and then writing them in her diary as if they’re hers. Her podcast then puts her in the path of a pink-haired indie-pop star on the local scene Bobbi Kitten (who plays herself) whom Lennon impresses with an “original song.” Watching the two tease out a romantic relationship as Lennon becomes intoxicated by Bobbi’s infectious energy as she pulls Lennon deeper into the music scene is a highlight. One can tell Bobbi is attracted to the talent Lennon has and vice-versa, strengthening their relationship which is all the more intriguing because the lies to be exposed are right around the corner. The tension slowly arises, creating a much-needed layer of suspense to what could’ve been just another story of young, obsessive love. We’ll even see Lennon track Bobbi’s whereabouts through social media and attempt to mimic her behaviors when she’s not around.

Sylvie Mix plays the role with a shy naivety but under the sly laughter and quiet manner of speaking lingers a genuine psychopath. Anyone who harbors an obsessive behavior can fall victim to some terrible instincts, so when she starts to believe the lies she tells herself, even when confronted, one can see the character is going down a path of no return. Her dark personality turn is where the tone of Poser shifts into a slightly more exaggerated and dark one which, by the end, feels slightly off. The cuteness and tempered mannerisms of her quiet speak should not at all excuse the genuine derangement of Lennon’s behavior. If anything, the film doesn’t take her psychosis seriously enough to warrant the violent ending the directing duo pushes for.

In their debut feature, the team does display a fine eye for a Wes Anderson-like aesthetic without the pop color and instead imbuing their frames with deep cinematic blues. The film flows through its sub-90-minute runtime by a series of chapters highlighting where the character is and what band Lennon is interviewing, also suggesting her psychological state. The bands interviewed by Lennon (including Son of Dribble, wyd, and Mungbean) all play original music and even when the film acts satirical about artists––like pointing fun at their creative process––the music never misses a beat from catchy indie pop, electronic, and hip-hop, adding natural kinetic energy which moves the story along nicely.

Stories about obsession gone awry often follow a familiar path; what makes Poser stray from the typical delusions or behaviors is the world the directorial duo effectively create. Underground music scenes and artists burgeoning with talent in Columbus are unknown. So watching the artists collaborate to make a mix of music, poetry, and dance holds the intrigue for long enough even with the detached Lennon at the center lying her way through it all.