Tribeca Review: No Man of God Recontextualizes Ted Bundy with a Stand-Out Performance from Luke Kirby 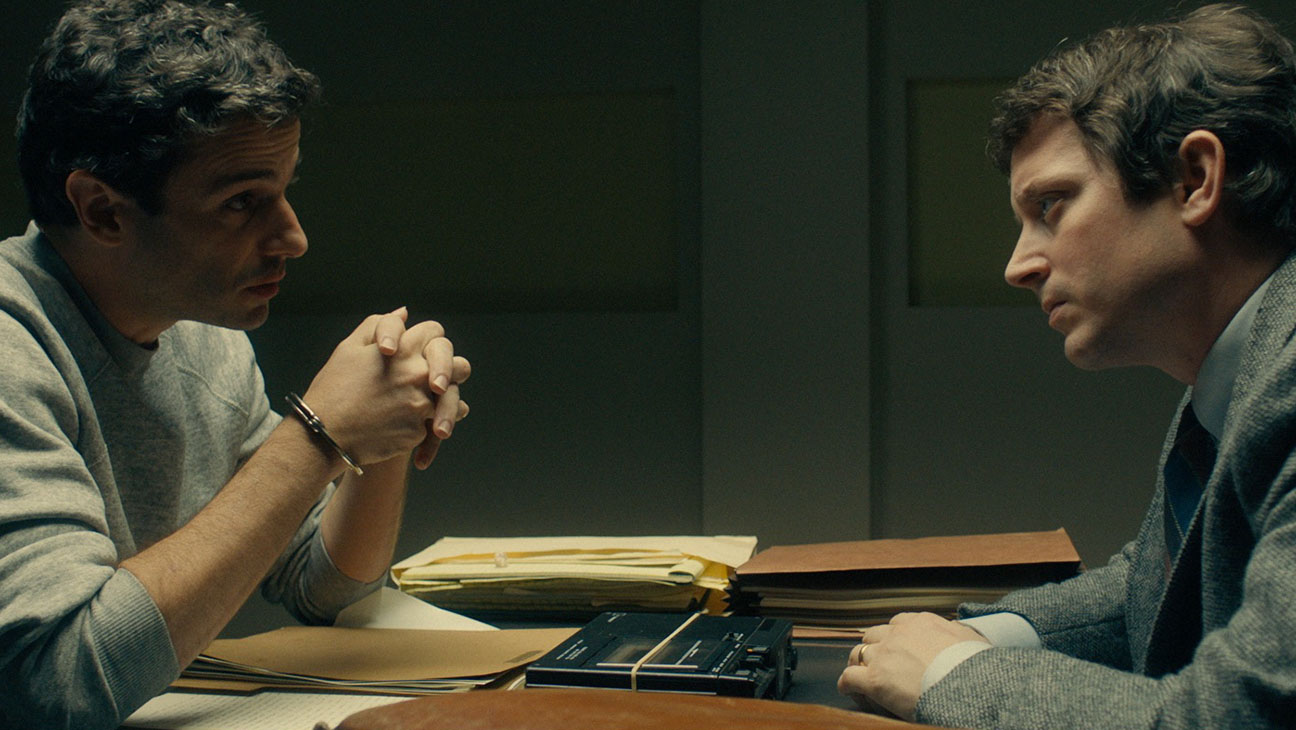 Partly playing out as a chamber piece that fictionalizes a series of conversations between Ted Bundy (Luke Kirby) and FBI profiler Bill Hagmaier (Elijah Wood), Amber Sealey’s No Man of God is an actors showcase that purposely eschews mythologizing Bundy or his crimes. Serving, in part, as a counterpoint to previous films and documentaries that play up Bundy’s charisma, Sealey and Kirby, alongside writer Kit Lesser, strip away that magnetism to reveal a needy individual who very much wants to claim normality, even in the face of his horrific crimes. Structurally bifurcated, with the second half of the film unfurling under a seven-day timeframe before Bundy is scheduled to be executed, Sealey’s film is an effective, if occasionally blunt, dive into the relationship between Bundy and Hagmaier.

The story begins in 1985 as Hagmaier––a rookie on the newly created FBI Behavioral Analysis division––volunteers to interview Bundy to collect information for profiling. Hagmaier exchanges letters with Bundy, building a rapport before meeting in person to discuss various cases. Purposely not asking about his own crimes, Hagmaier chips away at Bundy’s effusive walls, slowly learning more about him. For much of the first half of the film, Sealey hones in on these interviews, only briefly showing Hagmaier’s life outside of the interview room––including brief cameos by Robert Patrick as his superior. The narrative often jumps forward in time, as Hagmaier visits Bundy every year, learning a bit more about him with each interview, with the two becoming closer, if not exactly friendly.

Standoffish in a way that attempts to play up his own intelligence, Kirby’s Bundy is always calling attention to his intellect. If Zac Efron played up Bundy’s theatrics in 2019’s Extremely Wicked, Shockingly Evil and Vile, Kirby does the inverse, slowing Bundy’s speech down as he makes a performance of processing every bit of information, believing himself to have a window into the mind of serial killer. Bundy’s performativity is central to Kirby’s performance, as he often calls attention to Hagmaier’s attempts to play him, even though Hagmaier seems effusive about Bundy.  It’s a powerhouse performance, and really the best thing that Kirby, an effective but often underutilized actor, has ever done.

Wood wisely provides a counterbalance in a less showy role, utilizing Hagmaier’s sincerity and naivety as a tool to combat Bundy’s paranoia about law enforcement. His Hagmaier comes across both as overwhelmed by Bundy’s calm, but also in-control of the interviews, willing to push when necessary but also happy to cede to Bundy to pontificate. Further, Sealey (and Lesser) choose to isolate both Bundy and Hagmaier, never showing their lives outside of the relationship to each other. While Hagmaier has a family, they are often only alluded to.

For half of the film, the interrogation room is the central setting, as the two characters play off each other, giving the actors a great deal to work with. However, when the film shifts to Bundy’s execution about halfway through, Sealey opens up the narrative, moving out of the interrogation room and introducing Bundy’s civil lawyer Masha Tanner (Allison Baver), as she and Hagmaier jockey for Bundy’s rapidly disappearing time. Tanner is hoping that press interviews might provide some sympathy for Bundy and defer his execution, and Hagmaier argues for more time with law enforcement, believing that Bundy will actually confess to the murders and give the victim’s families some sense of relief.

By employing such an abrupt shift, No Man of God sometimes feels like two disparate films stitched together, as the two halves don’t quite gel together with the former’s theatrical confinement grating against the expansive ticking clock narrative that comes after it, yet both work in their own right. Wood and Kirby effectively sparing expands our understanding of fictional portrayals of Bundy, and views him as less of a charming figure than a profoundly exhausting person, always willing to show off what he perceives as heightened intelligence. Further, when Bundy is scheduled for execution, Sealey showcases how politics is played out on Bundy, as states lobby for time to hopefully close their cases, and Bundy is given the power and interest that he so desperately craves.

In this latter section, Sealey often collapses the space between Bundy and Hagmaier, playing up their similarities and showcasing the ways in which Bundy’s particular brand of evil is both an aberration that also can manifest in others. In a particularly effective scene, Sealey’s camera pushes past Bundy, as he is being interviewed and describing his horrific murders, to focus on the chilling reaction of a female PA as she listens to Bundy’s nonchalance. Further, Baver’s Tanner is not only marginalized by Bundy, but also Hagmaier, who questions her reason to defend such a horrible person.

Towards the end, as Bundy takes Hagamier into his thought process, the two characters seemingly merge. These choices offset and reframe the predominant male energy that the two main characters give off, and centralize, if only briefly, the women who are forced to interact with Bundy. It’s a profoundly disturbing structural and visual decision that bluntly emphasizes the connection between the two men, while also reinforcing Bundy’s sheer immorality.

While No Man of God is a bit disjointed when trying to connect these contrasting halves, both work effectively on their own. Sealey’s film may not add up to a fully realized and coherent film, she has nevertheless made an engrossing feature that recontextualizes Bundy not as the alluring psychopath, but as a profoundly desperate figure, who craves attention.

No Man of God premiered at the Tribeca Festival.