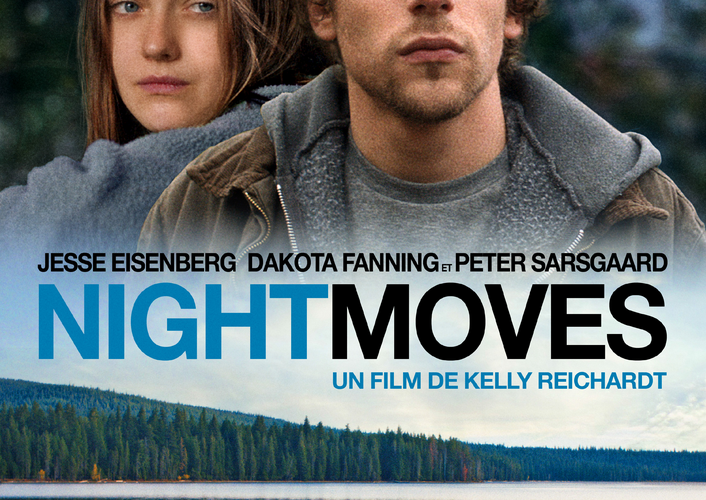 For almost a decade now—or, since returning to the world of feature-length film she left behind with 1996’s Leaves of Grass—Kelly Reichardt has been making formally precise, low-key anti-genre films that transform and revise tropes and expectations to create subtle works of stasis and escape. Old Joy turned a buddy/road-film into a homoerotic excavation of unfulfilling nostalgia. Wendy and Lucy is a road film in which the heroine is never on the road, but instead caught up in the ignored, realist nightmares that have only been romanticized in the decades since Kerouac: she is low on food, money, gas, and clothes, and without her lone (canine) companion. The only frontier left is all the way up in Alaska, and who is to say reports of work are reliable? Meek’s Cutoff, Reichardt’s masterpiece and the best western since Jim Jarmusch’s Dead Man, assumes the point of view of the women, ingeniously resorting to an academy aspect ratio both to reference the western myth and to literalize the women’s narrow vision (blocked by their hat) and distance from vital information. The myth of the western is turned into a look at an aimless road of hopeless travelers, comparing and contrasting directionless men with dismissed and disconnected women.

For the first hour, Night Moves looks to be a piece with Reichardt’s past works, playing at first like a deconstruction of the heist film, but as the film goes on, it becomes clear that Night Moves is less interested in examining the genre than embracing it. Indeed, in an interview with Fandor, Reichardt cites the seminal Rififi as an influence and states that although she usually doesn’t think about genre during the writing stage, with Night Moves, she and frequent writing partner Jonathan Raymond “just got on board with the genre idea, even during the writing, and certainly in actual filmmaking.” The result is a good but unspectacular genre film, one that utilizes Reichardt’s naturalist style to encourage character interpretation, but it also fails to glean the gold underneath in the process. The reality being uncovered, the myth being debunked, and the psychology being unearthed are, if not missing, comparatively lacking. Picking up a suggestive line here and there, we discern fairly quickly that Josh (Jesse Eisenberg), his brother Harmon (Peter Saarsgard), and Dena (Dakota Fanning) have acquired a boat that they plan to stock full of ammonium nitrate fertilizer in order to blow up a dam in the name of energy conservation and marine biodiversity. What makes this first hour so effective is, first, the revealing dialogue, and second, Reichardt’s evocation of place. Josh is quick to bring up questions when the smallest thing goes awry but just as quick to drop them and reassure his partners. Josh and Dena engage in an ideologically charged (but downplayed) conversation about fishing; Dena’s attempt to buy fertilizer is a beautifully acted, tightly-scripted scene that is more about character attitudes and biases than plot obstacles.

More important are Reichardt’s regular digressions to long, evocative shots of the Pacific Northwest that underline these tensions. The opening images, static shots displaying an opposition between the characters and their target, succeeded by a tracking shot following a bike down a mountainous road, are as strong as the similar digressions in Old Joy, and almost every new location is established through a series of longer takes, careful to frame plateau, river, plants, evergreens, and mountains in vertically-integrated, painterly deep-space compositions. What has long made Reichardt such a laudable and unique filmmaker is that her use of sound and image instill new, unexpected meanings on somewhat unstructured narratives, and those same tendencies adorn much of Night Moves. But also at work is a much clearer focus on storytelling and narrative cohesion. Littered with foreshadowing, a couple of scenes involving potential witnesses exist solely to create tension and suspense, but these moments best define the film. Unfortunately, post-heist the film becomes a somewhat aimless sequence of moody scenes, with plot-driven dialogue soiling many of the film’s ambiguities and resulting in uncharacteristically blunt moralizing. Josh becomes the primary focus of the film, but his arc is the most expected one the character could take, and so Night Moves fails both to say something new and to critique the tropes it unearths. As it goes on, it’s easy to lose interest, as the conclusion can be assumed early, and the camera completely ignores the details and nuances of behavior that were utilized so effectively to build suspense in the first half of the film. Reaction shots lose their intrigue, and the intervention of minor supporting characters slow the plot down but without adding insight or re-instilling Josh with sympathy. As invisibly as the film builds momentum, it loses it, and when the credits roll, the immediate reaction is more likely to be a shrug than a thoughtful turn of the head.

Still, it’s difficult to disparage a filmmaker for taking steps to flesh out narrative and improve storytelling, as it is far more likely that Night Moves is a stepping stone to more ambitious films than a turn toward simpler, more accessible fare. Reichardt’s formal chops have not dissipated, and in fact, they are as strong as ever for much of the film. If Night Moves is a misstep—and it is—it’s a testament to Reichardt’s talent that, all things considered, it’s still a pretty good film.

Night Moves screened at Tribeca Film Festival and opens on May 30th.